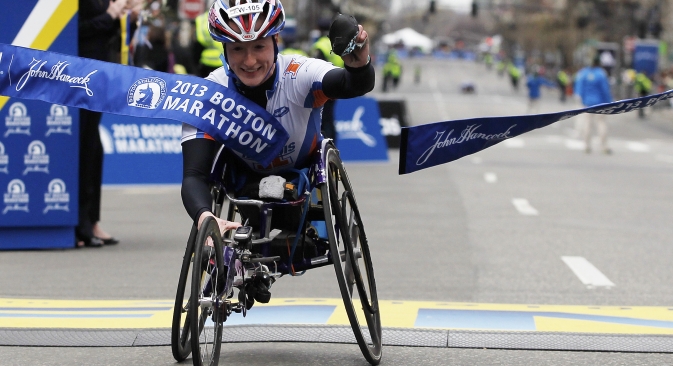 Russian athletes are shocked by the terrorist attack that took place at the Boston Marathon on April 15. They sympathize with the families of the blast victims, although they insist that such marathons must continue.

The Russian athletic community has responded to the terrorist attacks that took place during the Boston Marathon on April 15.

“I was shocked when I saw the footage from Boston on TV,” Izvestiawas told by Russian athlete Lidia Grigoryeva, who won the event in 2007. “The bombs were placed close to the spot where I ran when I competed in Boston. They went off four hours into the race. By that time, the group of professional athletes had already completed the race; I was usually part of that group.”

“The last time I ran in Boston was in 2010,” said Grigoryeva. “The event has always been very well organized. Even those who arranged the marathon used to run.”

Grigoryeva’s husband and renowned coach, Valery Grigoryev, was unable to hide his emotions.

“We have been on the phone and online all night. We have a lot of memories connected with this place. I know the entire route perfectly. The girls and I, we take this tragedy personally. It is a real shock,” Grigoryev told  the Moskovskie Novosti newspaper (Moscow News).

“I know the exact spot where the bombs went off. I normally stand between the 40th and 41st kilometer [4,920-6,560 feet before the finish line] and then walk to the finish – right through that spot. I can guess why they placed the bombs there. It is next to a VIP zone with restricted access. But close to it is an unguarded spot, where regular fans gather. They had been chosen as the attacker’s target,” said Grigoryev.

When asked how security can be ensured during a marathon, Grigoryev had no answer. “I have no idea. I think it is a global problem that we cannot resolve. This holds not only for Boston, but also any large-scale marathon. The only way is not to let people line the race,” the coach said.

Russian-born American athlete Tatyana McFadden will remember April 15, 2013, with mixed emotions: On that date, she won the women’s wheelchair race in Boston.

Deborah McFadden, the U.S. commissioner for disabilities, brought Tatyana with her to the U.S. from a St. Petersburg orphanage, where the paraplegic child was placed by her mother 15 years ago.

“It was an ordinary spring day prior to the blasts. I did well on the distance; I had great support and I won. The blast shocked me. It was very sad, because those who took part in the race were connected and supported one another,” Tatyana told Izvestia. “The police and medics did a great job. They responded immediately. The city was not crushed: there were good, sympathetic people around. They were trying to help the athletes and one another.”

Despite the shock, Russian athletes believe that such events as the Boston Marathon must continue, no matter what. “Its reputation has suffered a terrible wound,” Lidia said. “We had thought that sport was beyond terrorism, but now there are fears. I don’t think these events will stop. Terrorists want to scare people, so we need to show that everything is fine and go on with the marathon.”

Tatyana agrees with Lidia: “I believe that everything will be fine, and the police will find the perpetrators. You can’t live in fear. You can’t allow this to affect your lives.”

This article is a combined report based on articles by Izvestia and Moscow News.