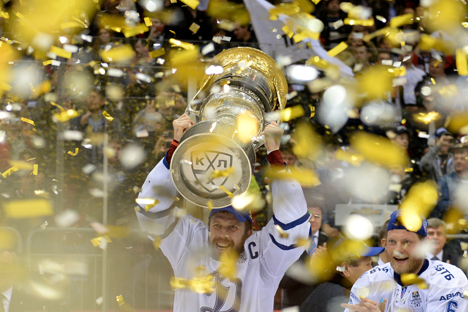 Dynamo wins the Gagarin Cup for the second year In a row. Source: ITAR-TASS

The Dynamo Moscow hockey team won the Gagarin Cup – the top prize in the Kontinental Hockey League. It was a fantastic present for the club’s 90th birthday, which fell on April 18.

The Dynamo Moscow hockey team has marked the anniversary of its founding by matching the Kontinental Hockey League (KHL) record and winning the Gagarin Cup for the second year in a row. Dynamo broke the resistance of Traktor Chelyabinsk in overtime, in game six of the final series – which was just as dramatic as the preceding five games – to win 3:2.

This victory added new luster to Dynamo Moscow’s already glorious history. Dynamo players had already notched up a hockey achievement as the only team to have taken part in the top division in every championship in the Soviet Union and Russia. Now they are the joint holders of another achievement.

The blue and whites have won the Gagarin Cup – the top prize in the Kontinental Hockey League and the most highly contested championship – for the second year running. Thus, Dynamo is now tied with Ak Bars Kazan, who lifted the trophy in 2008 and 2009. This was a fantastic present for the club’s 90th birthday, which fell on April 18.

In fact, the entire final series was a wonderful present – not just for the club itself, but also, one might say, for the whole country. The details and overall style of the series will surely remain in the memory of those who saw the contest, which could be described as a confrontation between two different hockey planets.

The style of Traktor and its coach, Valery Belousov, is like a demonstration of Soviet hockey: a multitude of combinations, with attempts to take the opponent’s defense apart in beautiful ways. The main parts in this Chelyabinsk orchestra were played by the respected Belarusian Andrei Kostitsyn and the virtuoso Valery Nichushkin.

Dynamo and its coach, Oleg Znarok, have a style that is forceful and more Canadian than Soviet: dumping the puck into the offensive zone and using checks that verge on fouls, with aggressive use of the elbows and the hockey stick shaft.

The key to their success is their excellent physical training, their ability to convert goal-scoring chances and the stable make-up of their players, who seem to be all cast in the same mold – all of medium height and strong in body and in spirit.

The way the series played out was also unusual. Each game was an outstanding clash, the outcome of which not even the greatest of pundits could guess. It looked as though Dynamo was going to finish the final on that Monday, but, even after recovering from a 0:3 deficit, they lost game five.

Traktor fans believed that fortune would also smile on them in game six. It was another impressive game. Traktor players continued to put together a cunning attack, leaving Dynamo defensemen standing again and again. The power of the Traktor attack, however, was reduced to a single goal.

After the interval, the situation on the rink changed completely. Dynamo players launched a furious attack. It was trademark Dynamo play: shooting, going for a tip-in, shooting again, and forceful play.

Coach Znarok knows how to mobilize his troops with strong masculine language, and, as soon as Dynamo got into top gear and went on the mental offensive, Traktor’s players crumpled, forgetting their finely worked combinations.

The figures on the scoreboard reflected the superior play of the Moscow team. In the 32nd minute, Sergei Soin broke into the goal area, right onto Chelyabinsk goaltender Michael Garnett’s territory, and shot the puck between his leg pads. The puck fluttered like a butterfly in front of the Canadian and crossed the goal line – 1:1.

Znarok hailed this success calmly, slowly raising his arms, as if saving his strength for a new outburst of positive emotion. And he did not have to wait long – Dmitry Pestunov soon took his first shot in the playoff, straight into an open goal.

In the final period, Dynamo played defensively, confining their opponents to the center of the rink. But brilliant talent cannot be contained. Kostitsyn made an exquisite flip pass to Traktor’s top scorer, Petri Kontiola, sending him straight for Yeryomenko.

The Finn disoriented the goaltender with his feints and drove the puck into the top corner, scoring his 10th goal in the playoff. And then it was overtime.

The first chance to end it went to Traktor – Czech Jan Bulis attacked Alexander Yeryomenko from the left wing, but the goaltender blocked his shot. Then the visitors broke the rules by having six players on the rink.

Dynamo withstood Traktor’s offensive with difficulty, but then Chelyabinsk player Evgeny Kuznetsov was given a penalty. The seconds of penalty time were ticking away, and Traktor also managed to survive playing shorthanded.

Then, like clockwork, Dynamo launched their last attack in the Gagarin Cup. Denis Kokarev crossed from the right across Garnett’s goal, and Alexei Tsvetkov was first to the puck.

It seemed to take him only a moment to pull off his helmet after the puck flew into the goal – and only a couple of seconds for his teammates to leap off the bench to hug him.

A few minutes later, Alexander Ovechkin, the KHL’s top scorer, tweeted his congratulations to the blue and whites. He had started the season with Dynamo, and his return to America after the lockout ended seemed like a blow to the club.

However, it appears that this team is not lacking in superstars, or even in phenomenal players. It is a phenomenon in itself.