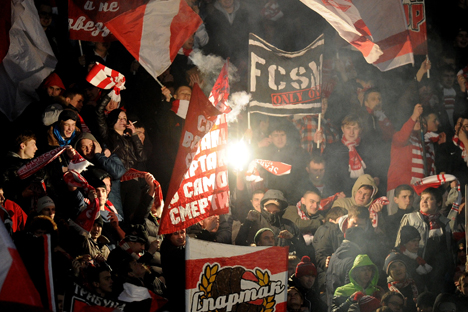 The clash between Spartak and CSKA is the most fascinating spectacle in Russian soccer. The players on the field are not the only ones fighting for the title – the supporters in the stands are too.

The most important match on the Russian soccer calendar – CSKA versus Spartak – was played for the 174th time on April 21, at Luzhniki Stadium. The nominal hosts, CSKA, who were top of the Russian Football Premier League, were at one point losing 0-2.

However, they put up a huge effort to escape defeat, with CSKA midfielder Alan Dzagoyev putting away a penalty in injury time to snatch a point – much to the delight of the 30,000 red-and-blue supporters in the stadium and the millions of fans watching on TV.

Despite the fact that Moscow’s Spartak has not won the national league title since 2001, the team has the most impressive army of supporters in Russia. When they played CSKA in what was officially an away game for Spartak, there were still more Spartak supporters in the stands – 40,000 of them.

After the first goal, a deathly hush descended on the red-and-blue CSKA stand, which then gave way to anger directed at Moscow referee Sergei Karasev.

Yet this anger was nothing compared to the personal insult that CSKA supporters had dished out to their rivals earlier. The day before the match, some CSKA fans set fire to one of the biggest banners bearing the Spartak logo, and, at the match itself, they unfurled a huge poster with a picture of Andrei Tikhonov on it.

The former Spartak midfielder was depicted with his mouth torn and was the target of abusive chanting. Spartak fans tried to respond in kind, abusing CSKA faithful throughout the match.

This was not the first time this kind of thing has happened in the long history of this rivalry.

One of the most memorable incidents took place in 2009. The red-and-whites were making an enormous banner that resembled Michelangelo’s “The Creation of Adam” – in the middle of the picture was the Spartak badge.

CSKA fans found out about this and even discovered where the banner was being made. They descended on Spartak supporters and set fire to the banner, which had only been in need of a few more finishing touches.

The red-and-whites were thus left without their piece of performance art less than a day before the most important match of the season. This was not the end of the story, however. Spartak fans mobilized all their forces and spent the whole night working on a new banner.

The result of their incredible efforts was that they managed to restore the banner just in time for the match. When the players walked out onto the field, they saw this big, epic picture in the stands – and also a small banner that read: “Masterpieces don’t burn.”

An even more unusual incident occurred in 2007. Not many people know that Luzhniki Stadium has a walkway that runs right around the stadium, behind the top row of seats. To access it, one would have to climb over a fence that is about 8.2 feet high.

This barrier proved no obstacle to the small group of Spartak fans who tried to stage a raid on the other side’s stand during the match. About 12 red-and-white supporters managed to get around the stadium unnoticed and infiltrate the CSKA supporters’ area.

Finding themselves in enemy territory, Spartak fans grabbed the red-and-blue banner and brought it back to their own stand, where they set it on fire. After this incident, the raiders became heroes.

It has not always been like this. For many years, the Spartak–CSKA match was overshadowed by CSKA’s rivalry with Dynamo Moscow, as well as by Spartak’s competition with Dynamo Kiev. However, after the collapse of the Soviet Union, it was the Spartak–CSKA game that gradually became the key fixture in Russian soccer.

From the beginning of the 1990s and right up to the year 2000, Spartak reigned supreme in the Russian league, winning one title after another. From 1999 onwards, though, CSKA began to present a serious challenge to the red-and-whites.

CSKA has had far more success over the past 13 years than Spartak, winning the league three times and bringing home a prestigious European trophy – the UEFA Cup.

According to Andrei Malosolov, a leader of the CSKA supporters’ movement, relations between the fans are becoming even more enflamed. “The supporters of the two clubs no longer have anything in common,” Malosolov told RBTH.

“When CSKA began to climb rapidly toward the top of the table at the beginning of the 2000s, our club started to get a new generation of supporters. I think that, in terms of the number of fans, CSKA now has the second-biggest following in Moscow.”

“The CSKA–Spartak match has gradually started filling stadiums, and that has led to various actions by the fans against each other. Burning banners is also part of the game. This isn’t the first such act – not even the 10th – and it comes from both sides.

About 10 years ago, the fans would fight, but now there is a substantial police presence at these matches. The fans are always under surveillance. One might say that the rivalry has moved away from its ferocious forms toward gentler ones,” said Malosolov.

Moscow’s local government gives credence to Malosolov’s words, often drafting in as many police officers as it can to the Moscow soccer match. There were 2,000 police at the last game.

“Andrei Tikhonov is a legend at our club, who always treated our rivals’ fans with respect,” said Molokanov. “I don’t understand why the CSKA fans decided to get at us like that. Let’s see how the football authorities react to it.”