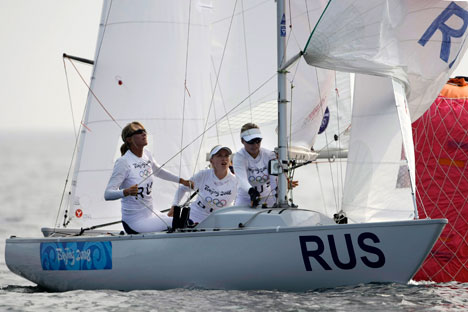 Georgy Shaiduko: "I might say that sailing is becoming increasingly popular in our country". Source: AP

RBTH sat down with Georgiy Shaiduko, senior vice president of the Russian Yachting Federation and Olympic medalist, to discuss Russia's sailing tradition and the national team's prospects for the future.

Georgiy Shaiduko, senior vice president of the Russian Yachting Federation, member of the Executive Committee of the International Sailing Federation (ISAF) and silver medalist at the 1996 Atlanta Olympics, tells RBTH in an exclusive interview about the state of sailing as a sport in Russia, the chances for Russian Olympians at the Rio de Janeiro Olympics and development of the sport in Eastern countries.

“I’ve noticed some progress in our sport’s development recently. I might say that sailing is becoming increasingly popular in our country: Sailing apparel is becoming fashionable, and more and more Russians are choosing to spend their holidays under a sail, either abroad or in Russia," he said.

"A huge number of projects not limited to just the Olympics have sprung up – children’s sport, tourism, offshore races, business regattas… We are also witnessing development of sailing in Russia’s regions,” Shaiduko added.

Georgiy Shaiduko: Russia has something to be proud of: The St. Petersburg yacht club, which will celebrate its 150th anniversary next year, was Europe’s first. Back in Soviet times, we were leaders of the Olympic sailing movement.

Team USSR won seven gold and 28 silver medals, but the collapse of the Soviet Union and the difficult 1990s dealt a serious blow to sailing as a sport. Virtually the entire infrastructure was destroyed and many talented sportsmen emigrated.

RBTH: Is this trend still going on?

G.S.: The past five years have seen a revival of sailing as a sport in Russia. Last year, we pushed through legislative amendments that have opened our territorial waters to yachtsmen from all over the world. They had been closed since 1939, on the orders of Lavrentiy Beriya [the Soviet chief of the secret police under Stalin].

Further liberalization of our waterways is in progress, which will allow us to host major racing regattas, develop coastal and inshore water tourism and bring big benefits to our economy. Russia has a lot of promising water routes, such as those from St. Petersburg to Moscow, around Scandinavia, the Volga River, the Black Sea basin, the Caspian Sea and Vladivostok.

RBTH: What is your assessment of Team Russia’s performance in London? Our team did not win a single medal.

G.S.: I’ll admit that we did a poor job. The team demonstrated its average level. We were close to a single Olympic medal for Ekaterina Skudina’s crew in the women’s match race, but we were out of luck. We aren’t going to give up though.

Competition that we could only dream about has already started to emerge among sportsmen. Three hundred people, mainly juniors, competed in the most recent Russian championship. It’s on the young people that we will be betting for the next Olympics.

RBTH: What can we expect from those juniors at Rio de Janeiro 2016?

G.S.: We have completely changed the training process, beginning this year, by inviting a foreign coach – the Greek Olympic champion Sofia Bekatorou. We hope this will bear fruit.

In my opinion, at Rio we stand a chance in the following disciplines: laser, radial laser, windsurf, 470 and catamaran. Let’s hope we are successful in at least one of the classes. One or two medals at Rio would be considered a success, but, at the Olympics after that, we will certainly count on winning some more. At the 2020 Olympics we will see Russia’s sailing at its best.

RBTH: The Australians had a huge advantage at the 2012 Olympics in London. How would you explain this phenomenon?

G.S.: The Australians, British and New Zealanders are island people. Communicating with the sea and sails is in their DNA. This is an entire culture passed down from generation to generation. Half of those countries’ populations are interested in sailing.

RBTH: Does sailing as a sport receive state support?

G.S.: We receive some support – but clearly not enough. Children’s sport has been shifted on to the shoulders of regional children’s sports schools and their parents. There are also many questions about the yacht club situation, children’s sports sections, building the infrastructure and coaches’ low salaries. Unfortunately, sailing sport is assessed on the basis of the number of Olympic medals rather than on the impact we could have as a sport.

RBTH: Is sailing considered an elite sport? Is that why it is developing so well in oil-rich Eastern countries?

G.S.: Sailing is called a royal sport. Many royals have taken part in regattas: the royal families of Greece, Spain, Denmark, the U.A.E. [United Arab Emirates]… Many affluent people too – millionaires, billionaires.

Yet, despite being elite, this sport requires serious physical training. It’s also necessary to know a lot of rules and to be able to calculate the power of the wind. Many people don’t even understand how anything can move under the power of wind, sail, and human capabilities. People often have to fight for the survival of their crews. Of course, sailing is very romantic, but it is also very dangerous.

Modern yachts can develop speeds of up to 56 miles per hour. In the East, this sport has been developing very rapidly. They have started seeing sailing as an image thing. Plus, they have perfect climate conditions: warm sea and wind.

RBTH:So yachts can sail at speeds comparable to cars?

G.S.: Yes, of course. High-speed trimarans can now sail around the world in 53 days. This year, a Frenchman sailed around the world alone in a monohull yacht in 79 days. Can you imagine that?

RBTH:Aren’t Russians looking for such adventures?

G.S.: Russia is not standing still as far as record setting is concerned. Last year, our guys crossed the Bering Strait on a kite, making the Guinness Book of Records. This year, Anatoly Kulik from Novosibirsk completed an around-the-world trip on an inflatable trimaran. He was even attacked by sharks, but he completed his adventure heroically. Last year, the yacht Scorpius sailed around the Antarctic and the Arctic during a single navigation, rising as high as the 74th parallel in the process.