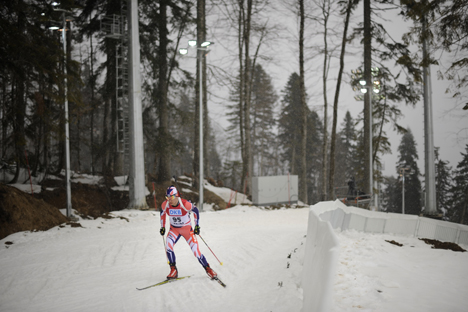 During the competition, athletes had access to an array of amenities which helped them prepare for the Games. Source: Mikhail Mordasov

Russia’s deputy prime minister, Dmitry Kozak, and president of the Sochi 2014 Organizing Committee, Dmitry Chernyshenko, tells about the results of test competitions for next February's Olympic Games in Sochi, sport's fans and security at the Sochi Olympics.

Russia’s deputy prime minister in charge of the 2014 Winter Olympics, Dmitry Kozak, and president of the Sochi 2014 Organizing Committee, Dmitry Chernyshenko, discuss the results of the 2012-2013 test competitions that were held as part of preparations for next February’s Games in Sochi.

On the test competitions

View the slideshow: Sochi tried its strength before the forthcoming Olympics

According to feedback from the IOC and the athletes themselves, the competitions were a success. Both the management system and the infrastructure passed the test. At the same time, we still have our work cut out for us, as the Olympics will be much more difficult.

Dmitry Chernyshenko: We’ve got a third Sochi 2014 testing season that is nearing its end. Up until now, the most extensive test competitions held before an Olympic Games were those held ahead of the Vancouver 2010 Games.

We have tripled that number. In total, 70 events in Olympic and Paralympic sports were held. The reason behind this number is obvious: All the facilities are brand new and had to be tested more extensively and more often.

An unprecedented number of athletes have come here. We realize that this is just the beginning. Importantly, we had 5,000 volunteers – ten times the number at previous test competitions.

Dmitry Kozak: The only thing that may be considered a failure was the weather – but we haven’t yet learned to control weather. That’s why we have taken all the necessary steps, so that we don’t depend too heavily on climatic situations during the Games.

Dmitry Chernyshenko: We are grateful to the weather for blessing us with the worst season in the past 11 years. We had earthquakes, floods and storms.

As a result, we have been able to test the prototypes of our emergency response protocols. We are hoping to be able to respond to those situations in a routine manner in the future.

Dmitry Chernyshenko: You may have got the impression that the stands were not filled to capacity. The number of spectators was carefully planned to take into account different factors – above all, the transport infrastructure, which is not yet fully up and running.

Main arterials, including a combined road to the mountains, will be commissioned in October. Also, safety played a role – I mean, we’ve still got construction going on. We are well aware of the fact that Sochi residents are very grateful fans and would have filled the stands to the brim if we had let them.

We successfully tested the fan’s passport and made sure that the system was working. The procedure that caused so much anxiety takes only a few minutes to complete.

Dmitry Kozak: We try to take into account all kinds of threats that exist – not only in our country, but also elsewhere in the world. Despite all the emergency measures in the United States, they were unable to prevent the Boston tragedy.

Of course we will try and minimize security-related inconveniences, but the measures we are taking are not excessive. We will do everything to avoid accidents in Sochi.

On the media center

Dmitry Kozak: The main media center should be handed over to the Olympic broadcasting company for the installation of equipment in the middle of May. As of today, we have no reason to believe that this won’t happen.

As far as a non-accredited press center is concerned, all formalities have been resolved for non-accredited journalists to enjoy the most convenient center in Olympic history.