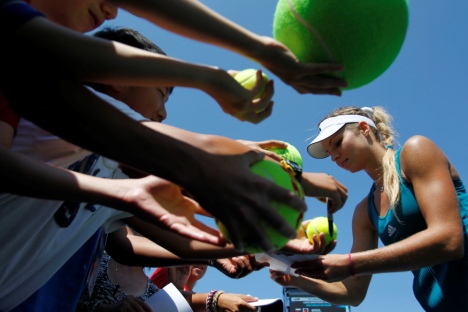 Russian tennis player Maria Kirilenko is currently ranked No. 12 in the world, her highest ever singles ranking. She talks of how she has managed to achieve so much and how she has gotten over her early career woes.

You’ve beaten quite a few top-seeded players this season. Have you changed as a tennis player? How come you have made so much progress this year compared with previous seasons?

A lot has changed. The years of practicing are starting to pay off – the things I’ve been working on for years are all there. I also believe that the right time comes for every athlete to show the best they can do. It is my time now.

I feel that I’ve changed as a player, I think differently when I’m on the court, and I take things differently. I have fun when I play. Even when I lose, I stay calm, because I know there are three sets to play. I see the situation quite differently now.

You won the U.S. Open junior tournament, and expectations were very high when you turned professional. Did you ever feel like giving up on tennis when things weren’t going your way?

No, never. I won the U.S. Open when I was 15. Look at my pictures back then – I was tiny, skinny, I had no strength for powerful shots or services.

I wouldn’t say that I’m especially strong now. That’s why it was difficult for me to go professional: it was difficult to play against adults. But it was a good learning process; if you look at my results, I got better every year.

There were no breakthroughs, but I had good victories over top players. Sharapova won a Grand Slam when she was 17, but she has always had a stronger physique. She’s always been taller than most of the competition.

You spent a lot of time looking for the right coach, but then stopped searching and began working with your father.

That’s right. I started playing with my dad, and then we invited a few coaches. Each one of them helped me improve my game, but then I understood that psychologically I feel better with my father.

He knows how to help me focus before a match; he knows the right words to say. There are no stressful situations with my dad, like there used to be with some other coaches.

You’re not their child. Finally, my dad plays tennis, and he’s much better than many of the coaches that I’ve had. I value our relationship and understanding.

You made this singles progress right after you stopped playing doubles. Is there any connection?

I’d been playing doubles almost every year since I was a kid and I was quite successful, with whatever partner I had. I won an Olympic medal in the Women’s Doubles with Nadia Petrova.

If it were not for the Williams sisters, we could have won the Olympic gold. But I don’t have fun playing doubles anymore. Besides, it’s hard to play both singles and doubles, especially if you manage to reach the later rounds in the singles competitions.

You mentioned the Williams sisters. Does Serena have some magic powers that make her opponents scared of her?

I wouldn’t say that she scares them, but it’s hard to play against her – especially when she’s really focused. She’s a different person when she’s super focused.

Judging by the pictures on your Twitter page, you’ve been to quite a few ice hockey games in Washington this year. But the Capitals, where your fiancé Alexander Ovechkin plays, have been knocked out of the Stanley Cup playoffs.

Did you manage to catch a lot of games on TV while you were busy on the European tournament circuit, or is your training regimen more important?

Who needs the Kremlin Cup?

Naturally, I didn’t watch the night games, but I kept an eye on the results and supported the team even when I was over here. There were some games that were scheduled earlier, and I managed to watch a few of them.

Were you upset that the Capitals got knocked out this year? Or is there a bright side and Alex will be able to come and root for you in Europe?

I know how important the Stanley Cup is to them as a team. I know how they wanted to win. Even when you watch the games, you see that they do their best.

I wish they had won the Stanley Cup, the most coveted ice hockey trophy. I am really upset, I know that Sasha is very upset, I’m very emotional.

On the other hand, he’s got many years left in him yet. He’s still young. I’m sure his time will come and they will eventually win the Stanley Cup.