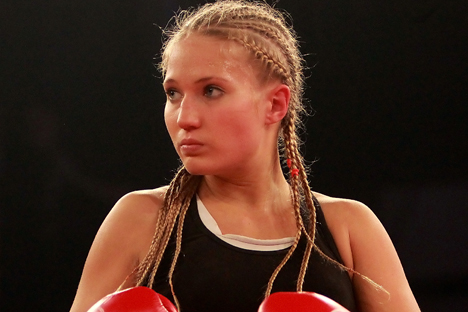 Anastasia Yankova is Russia's champion in Muay Thai, one of the world's most violent martial arts. She discusses with us her introduction to the sport, her passions and favorite martial artists.

Gazeta.ru: How did a lovely girl like you find her way into a martial arts gym?

Anastasia Yankova: It all began when I was very young. I loved watching films with Bruce Lee and other tough guys. Already then I wanted to be as strong as they were and to help people (smiles).

And I kept telling my mother: "Mum, I want to learn to do all that too." After much debate, my mother finally gave up and took me to a karate club, where I stayed for several years.

Gazeta.ru: And what happened next?

A.Y.: At 14 I had to decide what future occupation to choose. I had always been interested in journalism, acting and design. In the end design won.

I spent days drawing, sewing. At that time sport was something I was doing for myself. Then I came to a fitness club and met a Muay Thai instructor there.

I was standing next to the guys, trying to remember my low kicks and mawashi-geri. And I realized that I had been missing it all.

I spent some time going there and then moved to a Muay Thai club called Varyag, where I began to make rapid progress. From there I was very soon sent to a competition, the Russia Cup. And, to everybody's surprise, I won it.

Gazeta.ru: Is your mother a martial arts fan now?

A.Y.: She is (smiles). In recent years my Mum has seen more fights than I have. She watches my rivals' fights and ordinary competitions too. Even I do not always have time to follow them.

Gazeta.ru: Are your sparring partners all male?

A.Y.: When I trained at Varyag, yes, they were all men. But now I am training at the Boxing Academy, with Alexander Pogorelov, and my sparring partner is a woman.

But she is the kind of woman who can throw many guys down on the floor. Her name is Ekaterina Izotova, and she has won the world championship title many times.

She is slightly lighter than me but she has a very good, interesting technique. A sparring partner like that, who is also a teacher to you, is perfect.

She can explain, tell me, show me what to do and what not to do; tell me when to raise my arm, how to block.

Gazeta.ru: Do you have any favorites among martial artists?

A.Y.: Gina Carano is a great martial artist. She was the first and she is absolutely cool. It is like with Fedor Emelianenko: no matter how much is being said about him, his status remains unchanged.

Nobody can say anything about Emelianenko because he is the emperor and will remain one. There is also Mike Zambidis, he is very cool.

Zambidis is one of those martial artists whose fights can be watched again and again. Batu Khasikov? Batu is training in the same gym as me.

I am proud of it. I can see with my own eyes what I should aspire to. Batu is at that high level when an instructor can explain something to him but he can share his experience too.

Martial artists who have such a wealth of experience have an opinion of their own. In the end, a compromise is reached and it brings a result: a beautiful fight.

Gazeta.ru: Do you do any other sports apart from martial arts?

A.Y.: A change of activity is the best kind of rest. On my days off I prefer to do something that is absolutely different to martial arts. I love horses and equestrianism. When I have a free day, I ride.

Gazeta.ru: Wouldn't you like to take part in the Olympic Games?

A.Y.: Muay Thai is unlikely to ever become an Olympic sport: it is far too violent for that. As for the International Olympic Committee's ruling on wrestling, it is very sad indeed.

At first I could not even believe it was happening, could not understand who could have come up with an idea like that. I often visit other cities and there are no other clubs there apart from boxing and wrestling. Nothing else. And now they want to take it away too.

Gazeta.ru: Have you come across men who are weaker than you?

A.Y.: I see them in the street every day! (Laughs) I used to help guys lift weights but I don't do it anymore. I train with an instructor one-on-one.

Of course, people are different and I am not saying that everyone should be able to lift a 150-kg barbell in a clean and jerk. This not what strength is about, and male strength is not at all about that.

But if a man is puny, it is not my kind of thing either. Justin Bieber? Sorry, men like him leave me unimpressed.

Gazeta.ru: You have many tattoos. Have they been a passion of yours for a long time?

A.Y.: When I was having my first tattoo done, I already knew that it would not be my only one. I saw that I could stand the pain, that it was not all that painful or terrible.

Most of my tattoos are in the Japanese style. The latest one is a carp moving up a waterfall and turning into a dragon at the top. I do see that tattoos are mostly an aesthetic thing. But each tattoo marks something in my life.

For instance, I will tell my son: "This, my dear, is a key. I once had a dream that the founder of Kyokushin karate, Masutatsu Oyama, gave me a key and told me: 'You will open all doors with it.' And I thought that I cannot lose this key. So here it is, on my leg."

Gazeta.ru: Would you like to try your hand at mixed martial arts?

A.Y.: Yes, I would like that. Mixed fighting is an old dream of mine. I am very much interested in that, I like fighting. But there I will have to start from the very beginning. That means a different workload, a different kind of training.