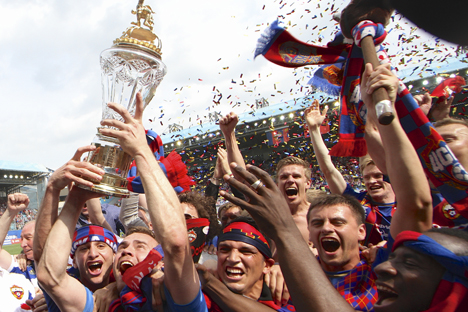 CSKA Moscow have won the Russian Premier League title for the fourth time in their history. The team won the trophy with a match to spare.

CSKA Moscow won the Russian Premier League title for the fourth time. But this time their success is all the more precious because it comes at a time when the club’s dominance on the domestic stage seemed to be fading.

By contrast, the 2012-13 CSKA outfit was not fancied to win anything. The main challengers for the league title in autumn 2012 seemed to be St. Petersburg's Zenit, title winners for the last two seasons under the guidance of Italian coach Luciano Spalletti.

Anzhi Makhachkala also appeared to be formidably strong, with stars of the caliber of Samuel Eto’o and Lassana Diarra.

CSKA were not willing to spend tens of millions of euros on new stars, and instead focused on finding talent in the lower leagues. The club’s scouts found two Swedes in the Dutch league – Pontus Wernbloom and Rasmus Elm, who had turned the midfield into an impenetrable fortress.

CSKA scouts also found the gifted Nigerian, Ahmed Musa, in the Netherlands. At the most critical moment, he replaced the best forward on the team – the injured Seydou Doumbia, who, incidentally, had been found in the Swiss league (also not considered one of the elite).

In addition to scouting, experts put the club’s success down to the trust that exists between its president and the head coach. Back in 2009, CSKA’s president, Yevgeny Giner, put his trust in Leonid Slutsky, who was a talented coach but who had not yet won anything.

He displayed a degree of restraint, which is surprising for today’s sports managers, when he refused to sack Slutsky last season, when CSKA could only manage to finish third in the Premier League.

CSKA didn’t get off to the best of starts this season; its Europa League campaign a complete flop, with the club dropping out at the play-off round. But this failure eventually went a long way toward helping the team achieve some great results.

The fact was that CSKA was without its main players throughout the campaign because of injuries, especially its forwards – Czech Tomáš Necid and Seydou Doumbia from the Ivory Coast were replaced at center forward by Nigerian Ahmed Musa, who was originally brought to play on the wing.

Various injuries at different times deprived the team of the Serb Zoran Tošič, Japan’s Keisuke Honda and the Chilean Mark González, but Slutsky kept the team winning without them.

The return of the CSKA fan-favorite Vágner Love from Brazil to the team also helped the club seal the Premier League title. It was a rare stroke of good luck: his transfer didn’t cost CSKA anything – Flamengo were experiencing financial difficulties and were obliged to return the player, having not paid for him.

Vágner turned up just when he was most needed, before the start of the concluding spring stage of the season.

The Brazilian shouldered the role not only of forward but also playmaker, where he was especially valuable – just at this moment CSKA’s main assist-maker Keisuke Honda was injured. Vágner scored five goals and had the same number of assists in nine matches.

There was a really touching moment after the game that clinched the title against Kuban: Vágner ran up to Yevgeny Giner holding the champions’ cup and handed the trophy to his boss, shouting in Russian, “This is for you.”

After five fruitless years, CSKA had finally managed to win the title. In the end, the continuity, patience and restraint of the red and blues’ management proved to be more valuable than Zenit and Anzhi’s multi-million transfers.

Based on materials from Kommersant and Lenta.ru