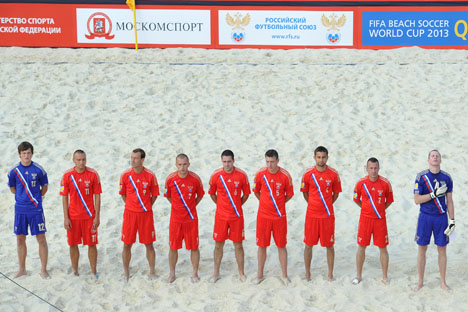 The national team have thrashed defending champions Brazil 12-8 in the final of the World Cup. Source: Ramil Sitdikov / RIA Novosti

Beach soccer is a truly exotic sport in a country that is covered with snow six months out of the year. Yet it is in this sport that the Russian national team has managed to become a global trendsetter.

Ravenna, Italy, September 2011: the final game of the Beach Soccer World Cup. Against all odds, the Russian team becomes world champion, knocking in 12 goals against Brazil – the world’s strongest team at the time.

This victory in what is a rather exotic sport for a cold country came as a surprise mixed with all too natural excitement for Russia. Russian fans had grown used to their big national soccer team’s failures, only to suddenly find a new reason to be proud.

The victory came as a surprise to the Brazilians as well. Nobody could explain their loss to Russia – a country where the beach soccer season lasts only five months, and where there is only one indoor arena.

Brazil – the country where beach soccer is a national pastime – had not really been challenged for years. That final match on Italian sand marked the beginning of a new era: that of the dominance of Russian beach soccer players.

It took Russia’s beach soccer team six years to evolve from a group of enthusiasts to world champions. Well-known Spartak Moscow player Nikolai Pisarev founded the team. In 2005, he became the head coach of the national team in a sport that was unknown in Russia at the time.

According to Pisarev, his charges had to learn from scratch in 2005: practicing playing barefoot on sand and learning the rules.

Beach soccer is very different from its big brother, in terms of the size and surface of the playing area, as well as in terms of the game duration (three periods of 12 minutes). Each team consists of five players – four outfield players and a goalkeeper.

The small playing area makes beach soccer more dynamic than classic soccer: It is not unheard of to score from your own half, and splitting players into defenders and strikers is much less pronounced. There is also less reliance on pure strength, and technique is of paramount importance.

“When we first started playing beach soccer, we were enthusiasts,” says Team Russia captain Ilya Leonov, who was named player of the tournament at the 2011 World Cup.

“It was a big deal when they started showing us on TV! But we attracted attention to ourselves with our play and performance, and people started talking about us on the Internet.”

The newborn Team Russia was progressing by leaps and bounds. In its first appearance in the Euro Beach Soccer League in 2007, the team won the bronze, earning a ticket to the 2007 World Cup. The national team placed 12th at that championship – not bad for a newbie.

The Russians made it to the quarter finals at the 2008 and 2009 World Cups before triumphing at the 2011 edition (FIFA decided to skip 2010). Team Russia, now led by coach Mikhail Likhachev, was unstoppable, not losing a single game and confidently dealing with the strong teams of Mexico and El Salvador in the play-offs. The tournament ended with the historic win over Brazil.

“I remember how the Brazilian TV reporters kept asking us: ‘How did you do it?’” said Leonov. “We had formed a team and accumulated experience and mutual understanding. Then a new coach came along – Mikhail Likhachev, who made a contribution of his own – and all of that combined to produce this result. Plus, we were in awesome physical condition.”

The teamwork is easy to explain: Almost all the national team players play for Lokomotiv Moscow, which is the unrivalled leader of Russian beach soccer. Russia has held national beach soccer championships since 2005. Despite there being 16 teams in the tournament, it has always come down to two Moscow clubs – Lokomotiv and Strogino.

Moscow is also home to the nation’s only children’s beach soccer school on the banks of the Moskva River. There are no indoor facilities however, so, from October to May, players have to travel for practice to the south of Russia, the shores of the Black Sea, or St. Petersburg (which has its own dedicated arena).

However, their popularity is nothing compared to that of the national team players of classic soccer, despite the latter’s far less impressive accomplishments. Their incomes are also worlds apart. “We were paid 420,000 rubles ($14,000) each for winning the World Cup,” Leonov says. “That was the biggest prize payout in my career.”

The 2011 success was no fluke for Team Russia. Their world triumph was followed by victories in the Intercontinental Cup – beach soccer’s second most important tournament, held annually in the United Arab Emirates. Russia beat Brazil in the finals in 2011 and 2012.

The next World Cup will take place in September 2013 in Tahiti, and Leonov and company are hoping to replicate their success from two years ago. The prerequisites are all there: a well-coordinated team core consisting of recognized masters, experience and the spirit of winners.

Team Russia made it to the World Cup finals at a Moscow qualifier in summer 2012. The Russian beach soccer players will be up for a difficult challenge in Tahiti: The Brazilians, longing for a big victory after all these years, will no doubt be desperate to get even with the surprising beach soccer team from the cold shores of Russia.