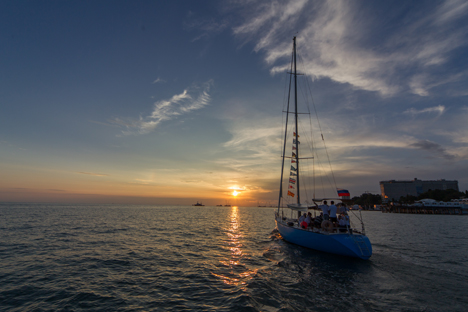 Several dozen yachts will congregate to the Black Sea on June 27, to sail along the historic Sevastopol–Sochi route.

The existing problems of Russian sailing and the need to develop the sport have been increasingly attracting the attention of professional yachtsmen and politicians alike. The Black Sea International Yacht Festival will mark the first time that Russia has hosted such an important event.

Sail boats and motorized vessels between 30 and 100 feet long will take part in the yachting rally, with participants joining along the way and finishing all together.

The festival will start at Sevastopol, Ukraine and finish at Sochi, Russia – the host city of the 2014 Winter Olympics.

Video: Krasnodar, the biggest city on the route to the Black Sea

There are a number of long-standing stereotypes about Russia, with perhaps the most oft-repeated one being that it is always freezing cold in Russia. Events of such a scale and level may help debunk the myths and develop tourism and the region as a whole.

It is worth noting that the natural conditions for the development of the sport are more than favorable. There are some obstacles too, though, such as the lack of a developed infrastructure and a poorly developed legal framework.

According to Alexander Liyev, Minister of the Autonomous Republic of Crimea, “the Festival will help develop yachting tourism in the region, strengthen cultural and tourist ties between the Black Sea coastal cities of Crimea and the Krasnodar Territory, and also help extend the tourist season.”

The season on the Black Sea coast begins in June and ends in August, but the lack of developed infrastructure is the main reason behind the marginal interest in yachting.

According to the captain of the Scorpius, Sergey Nizovtsev, who completed the first round-the-world polar expedition under sail last year, the attitudes of employees at Sochi marinas leave a lot to be desired: “After visiting them once, few people would ever want to come back…”

The Krasnodar Territory is the capital of Russia’s summer tourism. That being said, winter temperatures never sink below 5 degrees Celsius (41 degrees Fahrenheit), which is totally acceptable for yachting.

The region’s environmental situation has changed too. “Back in the day, the water in Sevastopol was so dirty it smelled of diesel fuel,” says Igor Petrov, chairman of the Black Sea Yachtsmen Association.

“And the day after tomorrow, a Blue Flag of Clean Water will be awarded in the new Tsarskaya Pristan yacht marina. Can you imagine this kind of progress? That’s all because yachts are an environmentally friendly means of transport and recreation,” says Petrov.

Yachting is an elite and expensive sport in Russia. In an exclusive interview with RBTH, the president of the Krasnodar Region Sailing Federation, Vladimir Sarkovich, commented on the situation.

Russia Beyond the Headlines:As the Sochi Olympics draw closer, prices for different services have been rising. Is the government doing anything to make sailing more affordable?

Vladimir Sarkovich: Special-purpose programs are being developed, competitions are being financed, etc. However, in my opinion, we are lagging behind in terms of coastal infrastructure development, which is key.

I mean the lack of marinas and yacht clubs where we can cultivate sailing, train kids and teenagers to become sailors, yachtsmen and skippers, and thus influence the development of yachting tourism in Russia.

Whenever the subject of yachting comes up in Russia, it is treated as something elite and out of reach. We are interested in developing sailing, particularly for kids.

The Ministry of Sailing is doing its best to develop the sport. I am confident that attracting investors and promoting public-private partnerships will help develop marinas that must accommodate sailing school branches.

It is crucial to allocate 30 percent of newly built marinas for the development of children’s and youth sailing. Otherwise, marinas will turn into mere mooring facilities.

RBTH:Who is incharge of building marinas in Russia – the government or the private sector?

V.S.: There is a public-private partnership in Sochi. Sovcomflot Group and the Ministry of Transport are building a grand marina in Sochi. I believe this will help resolve many technical matters.

Fortunately, the government is interested in developing this activity. Sailing tourism brings substantial revenue into state coffers – around 25 percent of all proceeds from global tourism.

Here’s an example: Yachting tourism brought the Turkish government $4 billion in 2010, with 15,000 mooring spots; by 2023, they are planning to build up to 50,000 moorages and are expecting revenues of $20 billion. In Russia, the situation is still different.

Rome wasn’t built in a day of course – but no pain, no gain. The situation with sailing as a sport in Russia isn’t going to change unless action is taken. The first step has been made, and it should lead to cardinal changes in the development of the sport.

Everybody will be able to meet the Festival’s yachtsmen and other participants at the ports of call. Meetings with local authorities will be organized to discuss the issues of maritime tourism and its development.