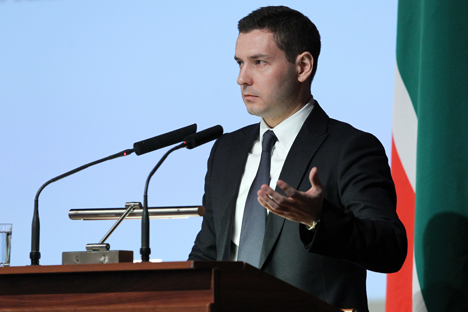 Vladimir Leonov, general director of the XXVII World Summer Student Games (Universiade) 2013 in Kazan talks about the changes in the city in preparation of the international sports event and the role of volunteers.

Vladimir Leonov, general director of the Executive Directorate of the XXVII World Summer Universiade 2013 in Kazan, talks to RBTHabout the role of volunteers, the revolutionary ID system planned for use in place of a visa regime, and the various changes taking place in Tatarstan’s capital in preparation for this international student sports competition.

Russia Beyond the Headlines (RBTH): Have you had a lot of applications for volunteers?

Vladimir Leonov: Surprisingly, many Russians have volunteered to serve this clearly noble cause. This is good, because we have a choice, and we can substitute people at short notice if the need arises.

More than 50,000 people from 45 countries have applied to become volunteers at the Games, although the number of applications from abroad is significantly lower than those closer to home.

In Russia, it’s mainly students and young people that volunteer, while international volunteers are of a more advanced age.

RBTH: How do you train volunteers?

V.L.: We have held a huge number of sessions to train volunteers in key skills and teach them the required knowledge. This was not limited to sports. The most important thing for us was to immerse them in the environment, to test their abilities and to season them. That’s the only way to assess the strengths and capabilities of any person.

It’s very important for us to observe the young people in action. Events like this one breed team leaders – the kind of people that that will become heads of departments and organizations.

By the way, many of the people we started working with three or four years ago are now working in government ministries and state-owned or private businesses.

They will be in demand no matter what. Russia is hosting a number of major sports competitions over the coming years. They will all require assistance from the volunteers we recruited during the Make U Real campaign.

And they will be able to share their experiences; 2014 Olympics recruiting centers have been opened in both Sochi and Kazan, and we have an agreement with the Olympic Organizing Committee that Kazan volunteers will be also involved in the Olympics.

RBTH: Will a special visa regime be introduced for delegations and foreign volunteers?

V.L.: All official participants, including the athletes and delegation heads, will enter Russia on accreditation IDs. We are now dealing with the formalities for international volunteers; by June 6, we will obtain a list of all persons that need an ID to cross the Russian border without hassle, and we will send them our badges.

Holders of accreditation IDs will be able to enter and leave Russia between June 20 and August 20 – provided they have a valid travel passport.

This is a revolutionary project for Russia, and an unprecedented one for the world. Participants will be able to use the badges to cross the border at any point, by plane, train, or automobile.

RBTH: What has changed in Kazan in the run-up to the international sports competitions the city will host?

V.L.: First of all, our ancient city has visibly changed. It has become noticeably younger and fresher. Thanks to the Universiade, Kazan has received 29 new unique sports facilities that have already been put to use by specialized children’s sports schools, for physical education lessons and as training facilities for local amateur teams.

Or take a look at the Universiade Village where athletes will be staying. This is actually a ready-made campus for 13,500 students, and there is nothing like it in Russia. The number of hotels in the city has grown considerably, and visitors to Kazan now have a wide choice – from economy rooms to private apartments.

The decades-old problem of the overloaded railway hub has been resolved. Big changes are in store for the old railway station: Reconstruction of its historic building will be completed in time for the Universiade, the neighboring territory will be gentrified and a covered walkway leading to the train platforms will be completed.

With the completion of the new terminal, Kazan International Airport can now accommodate all types of aircraft and handle huge passenger traffic. Universiade guests will have no problem getting to the city center on the Aeroexpress rapid trains, which take just 20 minutes and cost the equivalent of $5.

Finally, we have been able to considerably ease traffic jams. Numerous interchanges, miles of repaired pavement and plenty of underground parking built for the Universiade will free the city of traffic congestion.

The most important thing, though, is how people’s attitudes have changed. For many years, they have put up with the consequences of the construction boom in the city, familiarized themselves with the new symbols and signs, and learned to live in a completely different reality.

Every one of us – even those who are not directly involved with sports – can easily pass a test on all things Universiade with practically zero mistakes.

The youth has changed. They have been actively getting involved in preparations for the Games; many have joined the volunteer movement and are getting ready to welcome our guests.

A keen interest in Kazan’s history, in the annals of the international student sports movement and in learning foreign languages has emerged. In another great trend, living a healthy lifestyle has become popular. Up to 62 percent of the Tatarstan’s youth can’t imagine their lives without sports anymore.

RBTH: The Olympic Games are known to often run into the red. Will there be a return on investment in the Universiade?

V.L.: Of course the student games in Kazan are a nonprofit project. It’s impossible to break even or make money off of it. Such projects require huge investments to improve infrastructure.

How is it possible to expect a payback on, say, roads or an underground system? Obviously, in the long term, the investment will benefit the region’s development in general.

We have experienced both social and economic development over the past four years that would have otherwise taken 15-20 years to achieve. These competitions are a locomotive – a Usain Bolt that leads the way – and we all follow behind. People always need a perspective and some kind of stimulus.