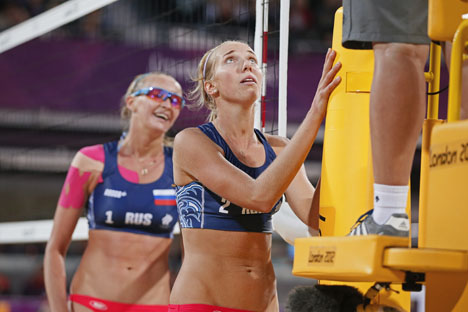 Yevgenia Ukolova (L): "We need some iconic figures and good results to spark the fans’ interest and attract them to our sport". Source: Reuters

Russian beach volleyball players are beginning to show their class at the world’s most prestigious tournaments, but their fellow citizens seem to have little interest in the sport.

On May 29, the first ever Beach Volleyball World Cup is set to kick off in the city of Campinas in Brazil. The tournament will gather together 10 doubles of each gender from every continent. Russia is bringing over its strongest tandem of Yevgenia Ukolova and Ekaterina Khomyakova.

The Brazilians and the Americans, dubbed the queens of the sand courts, are considered the favorites for the competition, whereas the Russians would be content to clinch third place.

The history of Russian beach volleyball goes back more than two decades, but its first major success came only after 2004, when the former coach of the Russia men’s national volleyball team, Gennady Shipulin, took charge of the beach version of the sport.

Shipulin was able to convince Igor Kolodinsky (then Belogorie club’s reserve setter) to try his hand on sand courts and pair up with Dmitri Barsouk, who was considered the best Russian beach volleyball player at the time. Italian coach Marco Solustri, who now works with the Russian women’s doubles, was hired to train the duo.

Kolodinsky and Barsouk stormed their way into the world’s elite by grabbing the 2007 World Championship silver medal and winning a high-profile Grand Slam tournament in Austria.

Back then, one Brazilian player gave Kolodinsky the nickname “Bazooka,” after his cannon-like serve: Igor had been awarded a special prize for the fastest serve for four years in a row and set the current world record of 114 kilometers per hour (70 miles per hour).

Unfortunately, the incomes of beach volleyball players are nowhere near the money their colleagues make playing the classic version of the sport. So, having achieved almost everything on beach courts in the heyday of his career a few years ago, Kolodinsky decided to leave the sand behind.

Even though Russia’s Belogorie and Zenit classic volleyball clubs in Belgorod and Kazan, respectively, signed him as second setter, he still earned much more than before.

Last year, Yevgenia Ukolova and Ekaterina Khomyakova won a Grand Slam tournament at Austria’s Klagenfurt. Even though the girls gave a weak performance at the London Olympics, they won two medals on the FIVB World Tour.

Ukolova, now 24, began her sports career in the Zarechye-Odintsovo club from Moscow Region. In the meantime, she took an interest in beach volleyball — a sport in which she ultimately established herself as a professional athlete and member of the national team. Her partner Khomyakova, though, chose sand volleyball from the very start.

“Russian people think that beach volleyball is some sort of a joke,” Ukolova says.

“But it is an extremely tough sport. First, no substitutions are allowed, so we have to keep ourselves in perfect shape throughout the year. And just think about the conditions we have to play in: In China, for example, where the humidity levels reach 100 percent, you melt like a candle on court. Or you might find yourself playing in the rain at nine degrees Celsius [48 degrees Fahrenheit]. No wonder we feel a little offended by this attitude.”

“Still, we understand why people feel that way: Russia is a vast country and the weather conditions may not always be appropriate for our sport,” says Ukolova.

“Even so, in summer, the beaches are always full of volleyball lovers. Let’s hope that sand volleyball gradually gains in popularity in the future. In this regard, much depends on the players. We need some iconic figures and good results to spark the fans’ interest and attract them to our sport.”

Ukolova’s criticism seems just: Even though Moscow hosts Grand Slam competitions every year, beach volleyball is not very popular among the Russian public at large. One reason for the low attendance rates is the rules enforced by the authorities.

Most Russian regions have banned the sale of alcoholic drinks during sporting events. But how can one survive the summer heat without a beer?

In Germany, for example, local beach volleyball tournaments bring together thousands of spectators, and beer sales help organizers recover most of the costs associated with such events.

As for Russia, however hard the country’s beach volleyball federation has tried, it has not been able to engage wider audiences. In many cases, such efforts have been ruined by the weather, as well as by the obvious fact that beach volleyball is overshadowed by its “big brother.”

Athletes playing classic volleyball are much more popular, whereas sand volleyball is still perceived as an exotic sport reserved for a small group of enthusiasts.

Russia’s primary, specialized, beach volleyball training center is called Volley Grad. It is located near Anapa in the Krasnodar Region.

The center features a number of indoor sand courts, where beach volleyball matches can be held even in winter. Volley Grad hosts most of the country’s key competitions — and most of them take place in front of empty seats.