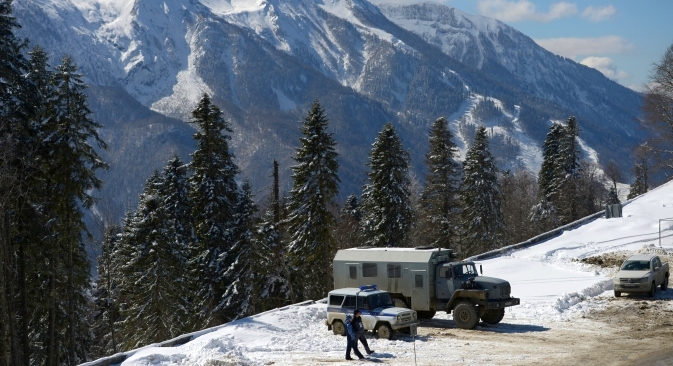 Russia's authority will do their best to prevent terror attacks at the 2014 Sochi Olympics. Source: RIA Novosti / Konstantin Chalabov

Russian officials have assured that there is no cause for concern regarding security at the Olympic Games in Sochi.

The deadly explosions that hit the Boston Marathon — one of the world's oldest — revived fears about security at the Winter Olympics to be held next year in Russia.

Even before the tragedy in Boston, many Western experts were unsure of the International Olympic Committee's (IOC) decision to award the Games to Sochi. Besides an almost total lack of world-class sports facilities, geographically, the city is located close to Russia's most troubled region: the North Caucasus, where the scars of recent wars and Islamic resistance remain to this day.

"It would be presumptuous to assume that we are ready for every contingency, but we will do everything to ensure that the Boston tragedy is not repeated," said Kozak. "We are carrying out a detailed analysis of every event, every situation."

According to Kozak, the introduction of special passports for spectators who pass a mandatory test will help protect against extremists.

Security at the Olympic Games will be implemented by Russia's formidable law enforcement agencies. In the words of Yuri Deshevykh, director of the Oversight Department of the Russian Ministry of Emergency Situations, a special group is being set up for the Olympics and the Paralympics. It will include about 1,500 rescue workers and firefighters, and around 100 vehicles, including four helicopters and five ships.

Security across the Greater Sochi region during the Olympics will be provided by 16 fire and rescue centers, of which 12 are already in operation, with four more to be built. All units are equipped with the latest in technology. For example, the 35th Fire Division will be armed with rapid-response ATVs, plus a unique fire engine with 10 tons of water and two tons of foam.

Public order will be maintained by 70,000 police officers on duty throughout the city. Special police units have begun alpine training, enabling them to serve in mountain regions and assist in emergency situations. Police forces will be divided into sections, each of which will have interpreters to help foreigners communicate with the custodians of the law.

So as to simplify the procedure for foreign guests to report incidents, the Russian Interior Ministry has drawn up a series of special forms in foreign languages. The forms are very easy to fill out — just check the boxes next to the options. It is worth noting that the forms will be available in all the languages of the participating countries of the Olympics.

In addition, there is a particular focus on training workers to operate hi-tech inspection equipment, which has already been purchased for the Olympics.  It is comparable to the equipment installed at all the world's major airports.

According to the head of public events at the Russian Interior Ministry, Sergei Borisov, safety standards at the Olympics must be at the very highest level.

"We are preparing our employees very thoroughly," he told RBTH. "A lot of training exercises are being held. They are improving their physical fitness and English skills. Only the top police officers from across the country will go to the Olympics. I think it is a great honor to represent your country at such a big event. The Boston tragedy was a blow to the entire global community. I hope such an incident will never happen again. Sports should be outside of politics."