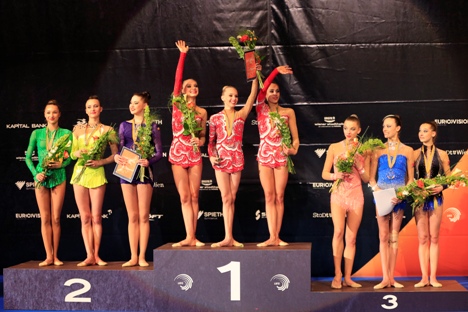 The young Russian competitors won all five gold medals that were being contested in the Rhythmic Gymnastics European Championships in Vienna.

The Rhythmic Gymnastics European Championships in Vienna ended in a clean sweep for the Russian team. The young Russian competitors — Margarita Mamun, Darya Svatkovskaya and Yana Kudryavtseva — won all five gold medals that were being contested in the championship, and Kudryavtseva became champion for the third time.

The Vienna championship was a powerful and convincing demonstration of the strength of the Russian school of rhythmic gymnastics, which has dominated the world for the last 15 years.

Everyone was already used to seeing the team, coached by Irina Viner, winning the team event with an overwhelming lead at every competition without exception. However, it looked as though the Austrian championship might be the event where the lead would turn out to be at least not as overwhelming as usual.

In pictures: Aliya Mustafina prepares to compete on the uneven bars

This suspicion was due to the fact that there had been some very serious changes on the Russian team since last season — the kind of changes that, even if not a disaster, would at least cause any team to moderate its medal ambitions.

The main change was that they were without Evgenia Kanaeva: the undisputed queen of the sport, who announced her retirement after winning her second Olympic gold in the individual all-round category in London last August.

After her departure, all hopes rested on competitors who were completely new faces to anyone who did not follow rhythmic gymnastics very closely.

Moreover, it could not even be said that the three girls representing Russia were recent graduates from the junior ranks, because they had not really left them: Margarita Mamun is 17, Darya Svatkovskaya is 16, and Yana Kudryavtseva is just 15!

They had all taken part in major competitions during the season, and they had all won prizes. Still, with the team being so young, it was difficult not to expect disappointment — especially since the Russians’ main rivals (the Belarusian and Bulgarian teams) included some experienced gymnasts.

But nothing went wrong. Seeing the highly complex routines that the Russian competitors performed so accurately and practically flawlessly, it was impossible to believe that it was the work of gymnasts who had barely reached the adult level.

As a result, the Russian team at this European championship officially performed even more successfully than at last year’s continental championship in Nizhny Novgorod, Russia. On their home turf, the team still gifted one gold to their opponents from Belarus; in Austria, they won them all.

Gymnastics star hangs up her ribbon?

Moreover, at this championship it was possible to speak in terms of the Russian team’s total hegemony. In theory, since the number of girls from the same country taking part in events with apparatus is restricted to two, the maximum result the team could have achieved was five gold medals and four silver. Thus, they came very close to the maximum.

In the ribbon exercises that closed the program, Kudryavtseva did not manage a podium place, finishing fourth. Nevertheless, Yana Kudryavtseva was the number one heroine of this championship, finishing ahead of her team competition gold-medal-winning teammates in terms of first places in the individual all-round events.

She was the best performer with the ball and clubs, while Darya Svatkovskaya was best with the hoop and Margarita Mamun with the ribbon.