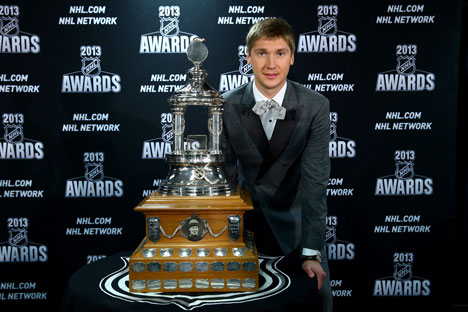 With the Sochi Olympics drawing closer, two members of the Russian national hockey team have been named the best players the National Hockey League.

It was no surprise for hockey experts that the title of most valuable player in the regular season (the Hart Trophy) went to Ovechkin; but the fact that the prize for best goaltender (the Vezina Trophy) was awarded to the 24-year-old Bobrovsky can, without a doubt, be called a landmark event for the whole of Russian hockey.

The Columbus goaltender is the first Russian to receive this prestigious award.

This was Sergei Bobrovsky’s first season as starting goaltender for an NHL club. Bobrovsky – a product of Novokuznetsk hockey – had previously spent two years with the Philadelphia Flyers in the shadow of his compatriot, Ilya Bryzgalov, and was unable to exploit his talent to the full.

After a move to the lower-ranking Blue Jackets, Bobrovsky managed to do something that was virtually impossible: For the first time in many years, Columbus challenged for a place in the playoffs, losing out to the Minnesota Wild in a tie-breaker.

A big part of this success was due to some excellent plays made by Bobrovsky, who pulled off save after save (with a save percentage of 93.2 percent) and was consistently named one of the “three stars” in his matches.

“Bobrovsky has had a wonderful season, and his reactions are something others can only dream of. He’s also got a high degree of stability,” said Nabokov. “Sergei deserved to win the Vezina Trophy. He made the right choice when he switched teams. Columbus is lower in the standings, so he can progress and grow into an outstanding goaltender. It would have taken him a few more years to get into the starting lineup for Philadelphia. The main thing for Bobrovsky is not to rest on his laurels and to keep making progress. He’s only 24, and he could become the starting goaltender for the Russian national team.”

Unlike his compatriot, Ovechkin is used to winning such awards: This is the third time he has won the Hart Trophy in his NHL career, having taken the honor two seasons in a row, in 2008 and 2009.

The 27-year-old Russian is only the eighth player in the history of the league to win the MVP prize three times. He is thus on a par with such North American hockey legends as Wayne Gretzky, Mario Lemieux, Bobby Clarke, Bobby Orr, Gordie Howe, Eddie Shore and Howie Morenz.

Legendary Russian forward Pavel Bure, who played nine seasons in the NHL, believes that Ovechkin has proven his rank once again.

“The way Ovechkin played proved to his critics once again that he’s just as good as Canada’s Sidney Crosby,” Bure told RBTH. “The former Dynamo player scored a lot, took the game upon himself and became a real leader with Washington. But even that wasn’t enough to compete for the Stanley Cup [Washington was knocked out in the second round of the playoffs, losing to the Boston Bruins]. My wish for Ovechkin is that he finally manages to scale that height too. He’s a top-class player who’s going to keep on writing his name into the hockey record books.”

Alexander Ovechkin and Sergei Bobrovsky will no doubt travel to the Olympics in Sochi, where they will try to help Zinetula Bilyaletdinov’s team win gold – something they have not managed to do since 1992.