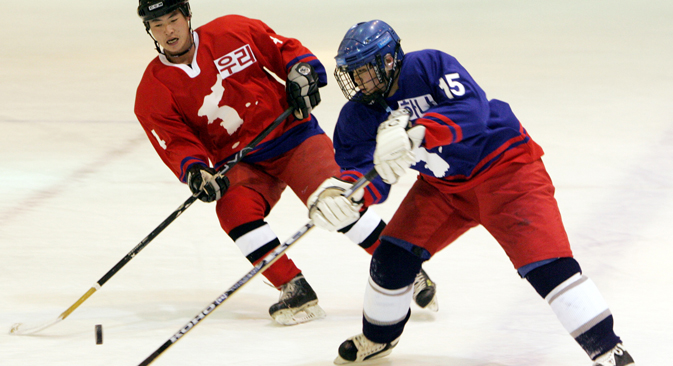 Ice hockey is only taking its first steps in many of the Asian countries. Source: AP

The HC Admiral Vladivostok, formed in summer, may be the first step in the Asian expansion of the KHL. China, Japan, South Korea and even North Korea are looking to create their own hockey clubs to ultimately join the KHL.

The recent formation of HC Admiral Vladivostok may be the first step in the Asian expansion of the Kontinental Hockey League (KHL). China, Japan, South Korea and even North Korea, which is virtually closed to the outside world, are looking to create their own hockey clubs to ultimately join the KHL.

Viacheslav Fetisov, a two-time Olympic champion and member of the Federation Council (upper house of Russian parliament), has been dreaming of going east with the KHL for years. He spoke about expansion plans back when he was Russia’s minister of sport and chairman of the board of the KHL.

He even once spoke in favor of creating the Eurasian Hockey League, which was supposed to include clubs from China, Japan and South Korea.

Yet this is the first time that Fetisov’s dream has been so close to becoming a reality. This summer, HC Admiral Vladivostok was formed in Russia’s easternmost city; it will join the KHL next season.

Previously, there had been only one hockey team in the Far East – HC Amur Khabarovsk. Although some call it a risky undertaking, the new hockey club on the Pacific coast clearly defines the league’s development pattern.

The KHL is apparently interested not only in the European hockey space, in which it brings together clubs from the Czech Republic, Slovakia, Latvia, Belarus and will include Croatian HC Medveščak Zagreb starting next season.

Now the league is also eyeing the multi-million Asian market. Ice hockey is only taking its first steps in many of the Asian countries; even so, an effective marketing campaign in China or Japan could result in attendance figures at least as high as the average for the KHL, if not higher.

“Developing a pan-Pacific KHL league is part of our long-term plan. It’s hard to speak about specific timeframes, but we may have two teams from Japan, Korea and China each in our league in a couple of years,” the International Ice Hockey Federation (IIHF) quoted Fetisov as saying on its website.

International ice hockey will obviously benefit from this move, but it is hard to say what it will bring to Russian hockey. As long as the KHL clubs live off state corporations and regional budgets, the league will never become truly cosmopolitan.

Currently, the only way for Asian clubs to join the KHL is to find local sponsors and have the league monitor the construction of arenas and management of players.

The case of HC Slovan Bratislava proved that this option is doable – although the Slovak club, with its army of fans, was founded almost a century ago and was already popular.

Statements by Russian officials make it clear that the plans for the KHL to expand eastward are real. Valery Kan, a member of the legislative assembly of Primorsky Region, said in an interview with ITAR-TASS that not only the developed Asian economies are looking to have their own hockey teams in the KHL, but North Korea as well.

“We have spoken to the South Korean parliament speaker about Korea’s own club, and some MPs asked us whether we might invite North Korea to found a club as well,” Kan said. “They are interested in promoting friendly relations with the DPRK.”

“North Korea itself is interested. They keep calling and inviting Fetisov at the level of the president of the Olympic Committee, minister of sport and presidents of all winter sports,” said Kan. “By the way, there are enough rinks in North Korea.”

Although they have rinks, North Korea, which is stuck in the 1960s, is clearly unable to play in the continent’s strongest league. For one thing, the national team is extremely weak. It became an IIHF member in 1970 and, since then, has remained in the lowest Division III.

In 2010, team North Korea had its only chance to move up a notch. After winning Division III, North Korea was invited to play in Division II, but could not go to Melbourne for financial reasons.

As a result, North Korea was given a technical defeat of 0–5 in all its games and, since then, has not had another chance to move up the rankings.

A North Korean club in the KHL might only be considered as a joke, giving fans enough room for countless more jokes, which include speculations on the name of the would-be North Korean club – HC Missile, HC Juche or HC Beloved Team of the Beloved Leader.