Russians with no one to root for in the Stanley Cup 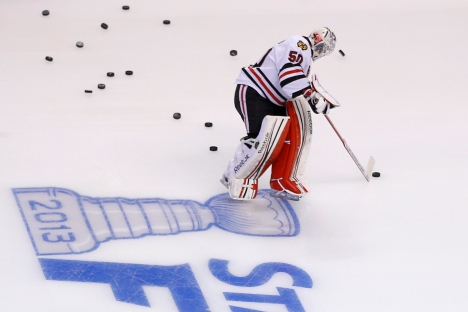 Not a single Russian player will be on the ice at the Stanley Cup finals between Chicago and Boston.

Stanley Cup Playoffs Game 6, which may give us the Cup winner, will start today at 8 p.m. (ET). The Boston Bruins will play the Chicago Blackhawks, who lead the series 3:2 and have home advantage.

Fans and specialists agree that this year’s finalists have put on the best game in recent years: An average 5.3 million viewers watched each game in the series, which is a new NHL record since 1995.

“I saw almost all of the games, and I can say that these are great finals. There’s not as much body-checking as we normally see in NHL games. There is lots of passing and lots of individual brilliance. I believe the Gagarin Cup finals [of the Kontinental Hockey League] and the Stanley Cup playoffs are equal when it comes to skill. Yet we still have problems with referees. The KHL is a new league; it’s been taking its first steps, so some negative things can distract us from the game,” says Aleksandr Kozhevnikov, who won two Olympic gold medals with the Soviet team.

Unlike in the Gagarin Cup finals, however, Russian fans must feel something is missing in the NHL’s crucial playoffs this year: There are no Russian players on the ice.

The only Russian who might make an appearance is goaltender Anton Khudobin, playing for the Bruins; but he is still on the bench, behind Finnish starter Tuukka Rask.

In all fairness, the average Russian hockey fan can hardly name a single Chicago or Boston player. Hockey legend Jaromir Jagr currently plays for the Bruins, but the Czech right winger moved to Boston as late as this April.

Having played for two clubs since he left the KHL, his career has been hard to follow across the ocean.

In addition, despite their recent success, neither the Blackhawks nor the Bruins have too many fans internationally, unlike some other NHL clubs.

The most popular clubs – Montreal, Edmonton (with the awesome Wayne Gretzky) and Philadelphia – owe their fame to their history and marketing.

Still, the main reason for Russians to watch a game and root for a club is the Russian players on the ice. Russia will certainly freak out if Evgeni Malkin’s Pittsburg ever plays Alexander Ovechkin’s Washington in the Stanley Cup finals.

These games would be the top sports news in Russia for a month – especially if spiced up with some rumors and scandals.

This year, Boston beat Pittsburg in the semis, while Chicago managed to defeat Los Angeles, whose defenseman, Slava Voynov (originally from Chelyabinsk), scored six goals during the playoff run.

“I’m sorry that there are no Russian players in the finals, but you have to understand that competition is intense in the NHL and any club making it into the playoff run from the first or eighth seed is capable of winning the Cup,” Valeri Kamensky, KHL vice president, tells RBTH.

“As for the finals, I watch the games and enjoy the show. Both teams are playing fast and with lots of tackling. I like the Blackhawks better; they have better teamplay. I also know their coach Joel Quenneville very well: He worked in Colorado when I played for the local club.”

Valeri Kamensky won the Stanley Cup during the 1995/1996 season, with Quenneville as assistant coach. He contributed generously to the Avalanche victory, scoring 38 goals and collecting 47 assists.

It has been a long time since Russian stars led their clubs to Stanley Cup victories – not just being on the team, but hurling their clubs to the coveted prize.

Only Pavel Datsyuk and Malkin come to mind: The former won the title in 2008 and the latter in 2009.

Yet it is the other way around these days: Russian forwards beat scoring records in the regular championship, but, as soon as the playoffs start, they seem to lose their magic – the way Cinderella’s carriage turns into a pumpkin when the clock strikes midnight.

Ovechkin seems to know this tale only too well.