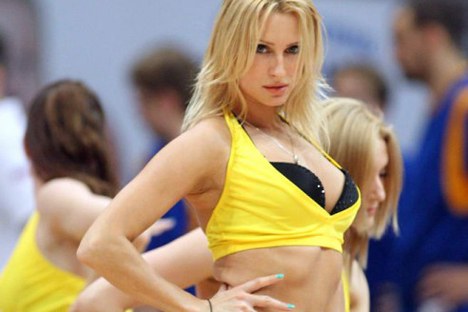 Cheerleading in professional sports is relatively new in Russia; appearing first in 1996, the phenomenon has recently gained mainstream popularity.

Cheerleaders love basketball which, by its very nature, offers many opportunities to shine: the sport is practiced indoors, includes considerable down time and features a parquet floor. “Our style is different. We don’t chant or shake pompoms like U.S. cheerleaders. Here, the focus is on offering a high-quality dance performance,” says Elena Solodovnikova, head cheerleader of Moscow’s BC Khimki.

Her squad is famous for performing a spectacular routine to the beat of Depeche Mode’s “Personal Jesus” at the end of the third quarter; the routine ends with a cheerleader climbing up to the rim of the hoop.

PHOTO OF THE DAY: U20 World Junior Hockey Championship in Ufa

“Our group is unique because all 10 cheerleaders are professionally trained in rhythmic or artistic gymnastics,” says Maria Drozdova of Moscow’s BC Triumph Lyubertsy. She combines cheering with a second job as a personal trainer at a gym in the capital city.

This is a common occurrence: Although Russian cheerleaders are usually paid for their work, cheering is a part-time job that does not cover the entire cost of living. Only one cheerleading squad— the CSKA Red Foxes (famous not only in Russia, but throughout Europe)—can boast pay of over €1,000 (about $1,300) a month.

Most cheerleaders are students in their last years of college, former gymnasts who fell by the wayside, or, like Maria, personal trainers or dance instructors.

Cheerleading squads are usually formed two months before the start of the season, to permit time for organizing tryouts and designing clothes and choreographed routines. Squads include at least seven members. When teams play international competitors, cheerleaders often prepare routines specifically for their team’s opponents.

The Red Foxes’ repertoire, for example, includes a flamenco-inspired number they perform when CSKA plays against Spanish teams in the Euro League, which has already occurred at least five times this season.

In the past, each Russian basketball cheerleading squad had the opportunity to present five choreographed routines before a jury, as part of an annual contest. CSKA’s squad won several times, prompting rumors that they enjoyed an unfair advantage.  Some Russian clubs, like their U.S. counterparts, include clauses in their contracts that explicitly prohibit cheerleaders from having relationships with any of their team’s players. In fact, practices are scheduled to prevent overlapping use of the court.

However, at least one relationship has blossomed between a CSKA player and one of the team’s cheerleaders. Indeed, cheerleaders draw the attention of fans and players alike. In 2011, for example, Spartak’s Diniyar Bilyaletdinov married Maria Pozdnyakova, who was a member of the Red Foxes squad when they met.

This year, the Baltic League organized a beauty contest based on popular vote, allowing fans to vote for their favorite “Miss Cheerleader” on the official website. After months of preliminary rounds, BC Tsmoski-Minsk’s Veronica Teplyakova was declared the winner. Teplyakova is a student at the Belarusian State University and, on the heels of this year’s win, has signed with a modeling agency.

More about women in sport:

Although low temperatures on the ice pose some challenges, they do not prevent Russia’s hockey teams from including cheerleading squads as part of their matches. The cheerleaders make the most of the situation, stationing themselves on a platform in the stands (when not performing) and sometimes wearing pants to combat the cold. Occasionally, they limit their choreography to cheering with pompoms, as the stands are often too cramped to accommodate more complex routines.

There are even cheerleaders at volleyball matches, although their league is smaller and therefore fails to garner as much attention. Recently, cheerleading has also broken into the sacred sport of soccer. Clubs like Zenit and Spartak have cheerleading squads, whose members take control of the turf before the game and during halftime.

Inclement weather (cold and rain), of course, is one challenge for cheerleaders. However, the greatest obstacle is the distance to the stands. From the cheerleaders’ platform, you can barely see what happens on the field without binoculars—particularly if the stadium has a track, as is the case at both Petrovsky and Luzhniki.