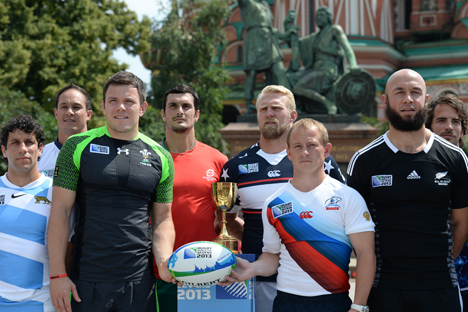 Russia, clearly short on experience—many of the players came to the team less than two years ago—were not discouraged by the losses. Source: Alexey Filippov / RIA Novosti

The sixth edition of the World Cup Sevens held in Moscow on June 28-30 saw New Zealand claiming both the men's and women's titles. Russia wins the Bowl title.

The 2013 Rugby World Cup Sevens was held at Moscow’s Luzhniki Stadium on June 28–30. Russia’s men came up short of the Cup, but carried home the Bowl, while the women’s team put a little more experience under their belts. New Zealand had the most to celebrate: The women’s team beat Canada, 29-12, and the men’s team had a comprehensive 33-0 win over England.

The Russian men’s team, led by Alexander Alekseyenko, had hoped to make it through to the final round, to compete for the Cup rather than the Plate or the Bowl, which are given to the winners of consolation events. However, following the 0-31 defeat by South Africa and a 5-21 defeat by Scotland, Russia’s only hope was to beat Japan and get into the second group of eight. The draw pushed Russia into the last eight, and the only prize it lifted was the Bowl.

The team began its quest for the trophy early on Sunday, June 30, first beating Spain, 17-7, and then Uruguay, 38-0. Russia had to play Japan again, this time in the final; but, unlike the group stage game, Japan did not put up a fight and Russia won the trophy, 29-5.

PHOTO OF THE DAY: Rugby World Cup Sevens in Moscow

“It doesn’t matter which of the finals we played. It’s always good to win, even in the Bowl final. It did matter to the guys. I’d like to thank them all; we managed to come back after the poor first couple of days and played for our fans, for our country,” Alekseyenko said after the final game.

Russia’s women, coached by Pavel Baranovsky, had hoped to make it at least to the top eight, but they only barely managed to do so. Russia beat Japan, 14-10, in the first game and needed to defeat France in the second to get into the quarterfinals; however, they missed three attempts while leading 26-7, ending with a draw at 26-26. This meant a third game had to be played—this time against England—and Russia needed a victory or a draw.

“We managed to achieve the benchmark goal, and new highs are ahead of us,” player Marina Petrova said after the 17-14 win over England.

Rugby in Russia: Bringing the gentleman’s game to the people

On Sunday, Russia was close to getting into the semis, but it missed one attempt and lost to Canada, 12-15. The tournament was not over yet, though, and Russia had to play in the Plate semifinals, where they lost to Australia, 5-7.

Russia, clearly short on experience—many of the players came to the team less than two years ago—were not discouraged by the Sunday losses.

“We played decent games. We never failed a game. We need more experience; we only have six or seven world-class players; the rest of the girls are taking their first steps. The games were quite serious, and it’s hard to find substitutes, so we shouldn’t be too hard on them,” Baranovsky said.

Games were played in the burning heat during the first two days of the tournament, with temperatures rising to 93 degrees Fahrenheit. On Sunday, the weather tested the players in a totally different way: During the first semifinal game between New Zealand and Fiji, a storm hit Luzhniki, followed by heavy rain. The players and technical staff had to leave the field.

After an hour-long recess, the games continued, but the conditions were already different: The turf had become cooler and puddles got in the way of attempts. The conditions remained unchanged until the end of the events.

“The weather changed, and the game changed, too. There were lots of fouls. It must have been more interesting for the fans, but the players had more problems: The ball is slippery; the turf is slippery, too. I hope the fans liked the show, though,” said Russia’s team captain, Alexander Yanyushkin.

The next major rugby sevens tournaments will be held at the 2016 Olympics in Rio, and the next World Cup will be held in 2018.