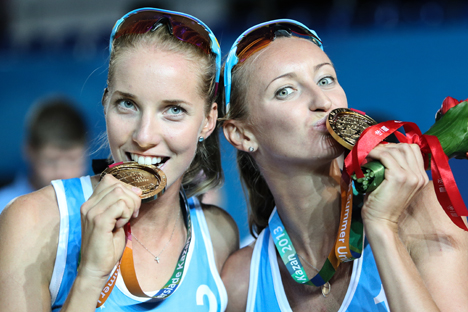 The World Student Games in the capital city of the Republic of Tatarstan have become a unique practice platform ahead of Russia’s main winter event — Sochi 2014. In Kazan, the Universiade organizers have a chance to fine-tune the organization of the competitions and security, as well as interactions with the press, fans and local residents.

However, many things have been far from ideal. The press has had seriously restricted access to the athletes, many competitions were left without any spectators, and athletes' sleeping quarters were not always consistent with international standards.

Russian gymnast Maria Paseka, who won gold in team competitions, was frustrated that the arena was half empty. "We were informed a month ago that tickets for all competition days were sold out," she said.

Photo of the day: Summer Universiade Opening Ceremony in Kazan

However, starting with the opening ceremonies, the ticketing system has been having serious problems. Many tickets were bought by scalpers who sold them for 10 times higher ($260 instead of $26).

In the middle of the games, many people were stuck standing in lines for several hours. As a result, fans gave up and left for home, and competitions were held in front of half-empty stands.

"Of course, as a patriot of Kazan, I am glad that we are hosting such an event; but why give spectators such a nerve-racking experience? It is very hard to buy a ticket," Kazan resident Myasrur told RBTH. Still, he added that he is happy about the new Kazan Arena, which will be the official field of Kazan's Rubin soccer team.

Opened in time for the Universiade, Kazan Arena holds 45,000 spectators and was the site of the opening ceremony of the games. Today, the stadium has the largest capacity in Russia, since Moscow's Luzhniki Stadium (82,000) is being remodeled.

In connection with the World Student Games, Kazan also received a new gymnastics center that holds more than 3,000 people, as well as a tennis academy with a capacity of 7,000 spectators. Universiade events were held at 31 sports facilities, and they have received praise from athletes.

"The infrastructure at all of the sports arenas amazed me. I got the feeling that Kazan is ready not only to host the Universiade, but also the Olympic Games," said Victor Chegin, coach of Olympic champion Elena Lashmanova (racewalking), who won gold at the Universiade.

On the other hand, the Olympic Village has raised some questions. Russian Universiade champion Valentin Smirnov (1,500-meter race) was extremely dissatisfied with the living conditions: "We had three people living in our room, the shower was often occupied. It all reminded me of a student dormitory."

The director of the Universiade Organizing Committee, Vladimir Leonov, believes that such problems occur in any international event. "Yes, we had some small oversights, but every sporting event has them," said Leonov. He drew attention to the fact that, in any case, Kazan enjoyed a real holiday, and, after the Universiade, the city will get to keep all of the sports facilities.

Yet another issue at the Universiade was the composition of the Russian delegation, which included three-time Olympic champion Svetlana Romashina (synchronized swimming), Olympic judo champion Arsen Galstyan, Olympic champion Yulia Zaripova (1,500-meter hurdles), and many others.

Other countries brought mainly students, who are professional athletes, but who have never come close to an Olympic medal. As a result, after five days of competition, the Russian delegation has won 62 percent (72) of all gold medals, leaving the competition far behind.

Leonov believes the success is not due to the Olympic champions on the Russian delegation, but to the extraordinary mood of the games: "Russians want to win in their home country. I do not see anything wrong with this. We observed something like this in 2011 in China."

Indeed, in 2011, China also put forward a large number of Olympians to compete, all of which were still officially students.

"Svetlana Romashina is a great competitor that I admire; I simply was not expecting her to still be studying at a university," Japan’s Yukiko Inui told RBTH. Inui became the Universiade’s synchronized swimming silver medalist, after giving up the gold medal to Romashina.

Last year, Romashina graduated from MIESI (Moscow Institute of Economics Statistics and Informatics) and participated in the Universiade quite legitimately. Yet did such a seasoned champion need a competition like Kazan’s student games, right before the aquatic sports world championships to be held in Barcelona at the end of July?

"For me, it was important to win in my country. For the first time, I competed live in front of my parents," said Romashina. "I had great support, and, for the first time in many years, I understood the expression 'home court advantage.'"

"Home court advantage" could help Russia win the Universiade medal count by quite a wide margin — and winners, as we all know, are not judged.