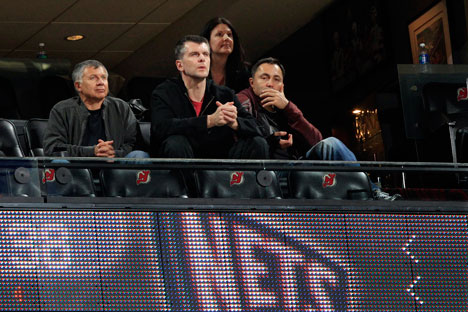 Mikhail Prokhorov’s basketball team could break the NBA record for a single team’s luxury tax by substantially exceeding the salary cap next season. Experts predict that Brooklyn will pay the league and its other teams about $75 million.

ESPN recently released data on which NBA teams will be required to pay the league a luxury tax as a result of last season’s payroll totals.

Unlike the NHL, for example, the NBA has a soft salary cap rather than a hard one, meaning that teams are allowed to exceed it and pay the luxury tax. In fact, it is often painless for them to do so; the collective bargaining agreement describes a number of situations in which a player’s contract does not count toward the cap. Last season’s cap was $58 million, and the so-called threshold (past which the luxury tax was levied) was $70.3 million.

The vast majority of teams stopped short of the salary cap, with only six of them paying a luxury tax as a result of having crossed the threshold. At $29.2 million, the Los Angeles Lakers will have to pay more than any other team; their $100-million payroll barely brought them into the 2013 playoffs, where they were swept in the first round. Following them are the 2013 champions, the Miami Heat ($13.3 million), then the Brooklyn Nets ($12.8 million), New York Knicks ($9.9 million), Chicago Bulls ($3.9 million) and Boston Celtics ($1.1 million).

Revenue from the luxury tax is divided into two halves. One half is added to the league’s revenue, while the other half goes directly to the teams which stayed below the threshold. Thus, each of the 24 more frugal teams will effectively receive $1.4 million of charitable assistance from the less financially conservative squads.

Luxury-tax payments could increase substantially next year. While the NBA’s salary cap will stay at practically the same level as the tax threshold, the system’s methods of calculating the tax will change. It used to be simple: Every dollar exceeding the threshold was matched by a dollar in tax payments.

ESPN’s experts have already predicted which team will pay the highest luxury tax. While the rosters have not yet been completed, everything points to Russian businessman Mikhail Prokhorov's Brooklyn Nets overtaking the Lakers in its total payroll. In late June, Brooklyn agreed with Boston on the conditions for a major trade, wherein it gave the Boston Celtics five players in exchange for famous Boston veterans Paul Pierce, Kevin Garnett and Jason Terry.

Of the three players, only Terry cannot truly be considered a highly paid player: He earns $5.2 million per year, whereas Pierce’s annual salary is $15.3 million, and Garnett’s is $12 million. That being said, despite having been eliminated in the first round of the playoffs last spring (like the Lakers), it seems that the Nets have no plans of losing their most expensive starters: Joe Johnson ($21.5 million), Deron Williams ($18.5 million) and Brook Lopez ($14.7 million).

So it follows that Brooklyn’s payroll ($84.9 million last season) will surely exceed $100 million this season, and, in accordance with the new scale, it will have to pay a luxury tax of approximately $75 million.

This will be a new NBA record. The last record was held by the United States’ largest city: New York. Seven years ago, the Knicks’ payroll was $124 million, or $62.3 million above the luxury-tax threshold. In accordance with the old, dollar-for-dollar rules, it was exactly this amount that Knicks owner James Dolan gave in assistance to the league and to less rich well-off teams than his own.