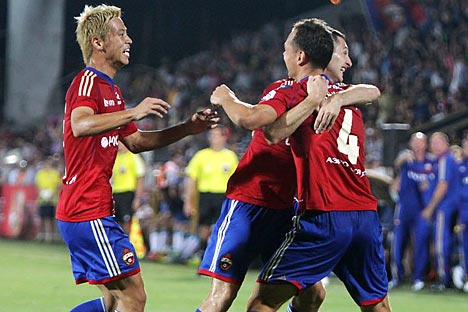 The new soccer season has kicked off with the Russian Super Cup match in Rostov. It was opened by Premier League champions and Russian Cup winners CSKA Moscow and Premier League runners-up Zenit St. Petersburg. After scoring against the St. Petersburg team twice in the first half, CSKA finished them off with a third goal after the interval, winning 3:0.

As for the Russian Premier League, which got under way on Sunday, all three matches were a draw: Dynamo Moscow and Volga Nizhny Novgorod tied 2:2 at the Khimki stadium, and the game between Anzhi Makhachkala and Lokomotiv Moscow finished with the same score.

Read more about soccer in Russia

The most even game in terms of quality of play proved to be the one in Krasnodar, where Kuban Krasnodar played Rubin Kazan; here, as well, neither side could secure a win, and the match finished 1:1. Thus, the first day of the season ended without even a nominal leader in the table.

The first round will not finish until Wednesday, when CSKA’s match against Ural and Zenit’s game against Kuban Krasnodar will be played, both having been postponed due to the Super Cup match. Then, on Friday, the second round program opens with Dynamo versus Anzhi.

The Super Cup match in Rostov followed the Russian soccer trend: Matches that would not attract a big crowd in the capital, which is saturated with sports, are delegated to the regions. The first competition to do this was the Russian Cup, which has staged its final outside the capital since 2009.

Two years later, the Super Cup was a sell-out in Krasnodar and almost filled the stadium in Samara. It was logical that the next southern city to have the honor of opening the soccer season should be Rostov.

In soccer terms, the Super Cup in Rostov could not be called a full-scale curtain-raiser for the new season. Too many players were absent for various reasons in the Moscow and St. Petersburg squads. CSKA were without Rasmus Elm, Mario Fernandes, Zoran Tosic, Seydou Doumbia, Aleksandr Caun and newcomer Georgi Milanov.

Zenit had a similar number of injuries: they were without Nicolas Lombaerts, Hulk, Roman Shirokov, Domenico Criscito and goalkeeper Vyacheslav Malafeev. Considering that Zenit was lacking their two main Russian players and the new goalkeeper Yury Lodygin, who has dual citizenship, the St. Petersburg club had a serious problem in complying with the limit on foreign players.

No one was surprised when, on the day of the match, Zenit’s official Twitter account published the hot news that the limit on foreign players would not apply in the Super Cup. Apparently the tournament’s regulations interpreted this rule fairly freely. Zenit, however, decided not to tempt fate and still fielded four players with Russian passports at the start of the game.

CSKA had no problem keeping within the limit. Injuries to their foreign players meant the team’s starting lineup included six Russian players: the goalkeeper Igor Akinfeev, the entire defense and Alan Dzagoev, who was playing as one of two holding midfielders. Dzagoev’s new role created a very attacking lineup for CSKA: Ahmed Musa was up front, with in-depth support from Vagner, while newcomer Steven Zuber was on the left wing and Keisuke Honda was on the right.

It was on the flanks where CSKA outplayed Zenit, with Honda playing particularly well. The Japanese midfielder outwitted the Zenit defense, again and again. Two of Honda’s shots went just past the post, and his third found the net. The second goal went to Sergey Ignashevich, who picked up the rebound from a free kick and drove it home.

Zenit regained the initiative for a while, but the advantage was illusory. CSKA simply waited for a suitable moment to counterattack, and, as the game was drawing to a close, Honda got his goal.

CSKA defeated one of their main rivals for the Premier League title, and, by winning the Super Cup for the fifth time, they have the privilege of keeping the trophy permanently. The presentation ceremony ended with a fireworks display, its brilliant explosions filling the dark Rostov sky for a long time after the end of the game.