Kazan looks ahead as successful Universiade comes to a close 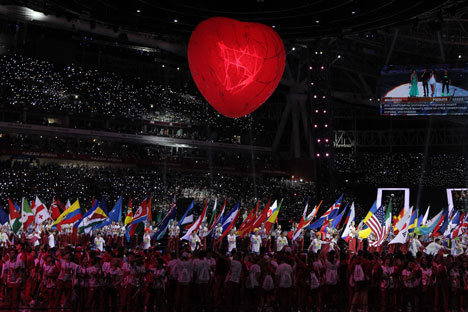 The longer-term plan of Kazan is to make a bid to host the 2024 Olympic Games. Source: Rossiyskaya Gazeta

As the Universiade ends Kazan is already looking forward to the World Aquatics Championship in 2015 and the FIFA World Cup in 2018. The city also plans to cast a bid for the 2024 Olympic Games.

“There is no ‘probably’ about it – this has without a doubt been the best Universiade in the history of the event,” said International University Sports Federation (FISU) President, Claude-Louis Gallien, during the Games.

PHOTO GALLEY: Records of Kazan Universiade in faces and figures

Even before the Universiade had kicked off, people were predicting that it would be the most ambitious in the history of the Games. More than 10,000 athletes from 162 countries battled it out for over 350 sets of medals.

A total of 228 billion roubles (around $7 billion) was earmarked, and 64 facilities built, for the Universiade in Kazan. To put that in perspective, the official budget for the 2018 FIFA World Cup, which will also be held in Russia, is 664 billion roubles (about $20.5 billion).

The tone for the event was set by the opening ceremony, which wouldn’t have been out of place at Olympic Games. And there was Olympic-style coverage of the Games to boot. Record viewing figures were recorded on the very first day by Eurosport, FISU’s official partner for the Universiade, doubling those achieved during the previous games in China. But that’s not all: the Games were also the most watched Universiade in U.S. television history, with ESPN transmitting 115 hours of the competition. The Games were shown in around 110 countries in total.

The Russian team topped the final medal table, setting a mark that is unlikely to be beaten; the previous record of 75 gold medals, set by the Chinese team two years ago, had been surpassed by the halfway point.

Its closet rival, China, came in second with 77 medals, of which only 26 were gold. It would be misleading to suggest that the reason for Russia’s triumphant performance was some kind of home field advantage, but the fact is that the team fielded the strongest athletes possible – world and Olympic champions – and the event program consisted of a number of Russian folk sports, with Russians often taking a clean sweep of the medals.

Russian athletes had great incentive to perform well, with competitors receiving 160,000 roubles (around $5,000) for a first place finish in addition to grants offered by the regional governments. The students who came from abroad to compete, however, were not here just to win, but also to make friends and have a good time. Throngs of student athletes could be spotted around town in Kazan at all hours of the day – but Russians were few and far between.

“There was no time for sightseeing, it was all about training sessions,” explains synchronized swimmer Alla Shishkina who, after immediately collecting her gold medal for the Synchronized Swimming Combination, hopped on a plane to join her teammates in their preparations for the World Championships.

Incidentally, the organization of athletes’ accommodation was one of the high points of the 2013 Universiade. Those who had competed in the London Olympic Games did not hesitate in giving the edge to Kazan. And this goes for the living conditions too, particularly the food, which the athletes praised in just about every interview they gave.

“Just look at how the Universiade has changed Kazan. Fifteen years ago or so, it was just another unimportant town, but now it’s one of the most beautiful cities in Europe,” noted Russian President Vladimir Putin when meeting with the athletes.

And you can’t deny the fact that the city has been given a new lease on life. They have fixed up the roads and built new interchanges. Even the eternally dissatisfied taxi drivers grudgingly admitted that all the inconveniences associated with preparations for the Games – the annoying construction work, the traffic jams and other expenses – were worth it in the end.

Not everything was finished on time, however. The unfinished embankment, for example, was covered with banners. And the locals joke that, instead of the 66 Italian carriages ordered for the new high-speed tram service, the city got lumped with 22 Belarusian ones. The tram came off its rails a couple of times during the Universiade.

The event itself received a rather unexpected warm welcome from the citizens of Kazan. After all, everyone knows that Kazan, just like Moscow, has more than enough sporting events as it is, and the locals’ interest is waning; ice hockey, basketball and soccer games are often played to half-empty stadiums here. But the Student Games proved to be a roaring success, for which the organizers were simply not prepared.

A rather paradoxical situation arose during the first few days of competition – spectator stands at the venues clearly had empty seats, but there were no tickets available.

Ticket queues were so long that many people working at the desks had to quit, saying that fans eager to get into the stadiums would not even let them take a lunch break. “Admittedly, our system has proven to be ineffective,” said the President of the Republic of Tatarstan, Rustam Minnikhanov, during the Games.

The Universiade is just the first of a series of sporting events that are set to take place in Kazan. The World Aquatics Championships will be held here in 2015, and the city has been named one of the host cities for the FIFA World Cup in 2018.

"Looking at the experience of previous Student Games, it is fair to say that, as a rule, the cities that have hosted the Universiade also tend to be chosen as the venues for world championships in all the sports featured in their programs within five years of hosting the Games. I have no doubt whatsoever – and we are engaged in active negotiations right now – that the next major sporting event to be held in Kazan will be the World Aquatics Championships, which will surpass the Universiade in terms of length and the number of participants,” said Kazan Mayor, Ilsur Metshin.

The longer-term plan is to make a bid to host the 2024 Olympic Games. “If Kazan puts its candidacy forth, then I think it has a good chance of winning,” said Marat Bariev, General Secretary of the Russian Olympic Committee.