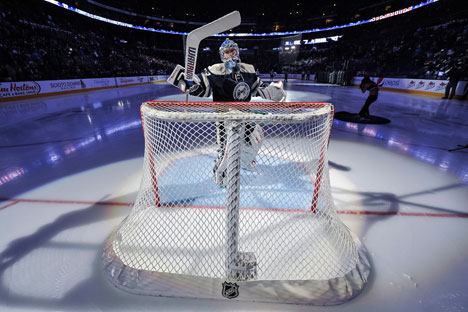 Sergei Bobrovsky prepares for the start of a game against the Minnesota Wild on April 7, 2013 at Nationwide Arena in Columbus, Ohio. Source: Getty Images / Fotobank

Last season's best goaltender in the NHL, Sergei Bobrovsky, has signed a new contract with the Columbus Blue Jackets. Gazeta.ru takes a look back at the Russian goaltender's career.

The Novokuznetsk trainee made his debut with his hometown club at the age of 18, having played in several games in the 2006/2007 season. The following season, Bobrovsky started tending Metallurg’s goal increasingly often. Lacking a big budget, his team was doomed to remain an underdog: This proved to be a major plus for the goalie.

Bobrovsky progressed so rapidly that he was invited to the Russian Superleague's All-Star Game. He completed his first contract in the spring of 2010. Many Russian hockey clubs had long dreamed of getting their hands on the goaltender, who had proven himself so well in Metallurg. He chose to go conquer the NHL, instead.

No overseas team drafted the Russian goaltender, but that did not stop Bobrovsky from signing a three-year contract with Philadelphia. The Flyers faced difficulties in the goalie lineup, following the loss of Ray Emery. Head coach Peter Laviolette had been looking over potential goalies at the team's summer training camp, and the Russian caught his eye.

Bobrovsky was pitted against Brian Boucher for the job of second goalie until an unexpected event occurred: The day before the season started, the Flyers' main goaltender, Michael Leighton, was seriously injured. The Russian rookie was sent out onto the ice in the opening match of the season.

His NHL debut proved to be astonishing. In his first season, he tended the goal in 28 winning Flyers games. The coaching staff played Bobrovsky in the playoffs, about which Leighton's local fans were not terribly pleased.

Flyers fans were even more displeased with Philadelphia's next acquisition: Ilya Bryzgalov. The Russian goalie signed a multimillion-dollar contract, whose remainder, the Flyers announced this summer, will be bought out. Bryzgalov immediately fell out with Philadelphia journalists, who did everything they could to make sure his stay in America's first capital was seen as no cause for celebration.

Having sent Leighton to a farm team in the fall of 2011, the club's leadership held a contest of sorts between the two Russian goalies. They chose to keep Bryzgalov and trade Bobrovsky.

The first reports of the Blue Jackets' interest in Bobrovsky surfaced immediately after the news of Leighton. In the summer of 2012, Philadelphia traded Bobrovsky, which it most likely now deeply regrets.

After the NHL lockout ended and the brief season began, Bobrovsky shared playing time with Columbus goalie Chris Mason. In March, the Blue Jackets had a record-breaking winning streak—at least in regulation time—and the Russian became the team's main goaltender.

Despite his team's failure to make the playoffs, Bobrovsky became the first Russian to receive the Vezina Trophy, which is awarded to the NFL's best goaltender.

Blue Jackets general manager Jarmo Kekäläinen was quoted on the team's official website as having said, “The Columbus management made a tremendous effort to hold onto the league's best goalkeeper. Re-signing Sergei Bobrovsky was a top priority for our organization. Bob is a terrific player and an outstanding young man. He was a big part of the progress we made last season, and we expect him to play an important role in the growth of our team.”

Not only Columbus's general manager, but also managers at SKA St. Petersburg were ready to sign Bobrovsky.

VIDEO: Metallurg Mg: One of the most famed KHL team

During the NHL lockout, Bobrovsky tended the SKA (Hockey Sports Club of the Army) goal and distinguished himself in the regular Kontinental Hockey League (KHL) season as a truly great player. It may be that the lack of such a strong goalie played a key role in the St. Petersburg powerhouse's failure to win the KHL’s Gagarin Cup.

This summer, SKA management has made an enormous effort to lure Bobrovsky away from Columbus. After the season's end, Bobrovsky and his wife spent a week in St. Petersburg, where they were preparing to buy an apartment. Negotiations with the goalkeeper were led by KHL president and SKA Council of Directors member Alexander Medvedev.

“I spoke with Sergei and his agent,” Komsomolskaya Pravda quoted Medvedev. “I reasoned for his need to return to SKA. If he were to play for the St. Petersburg club, Bobrovsky could play as the goalkeeper of the national team in the 2014 Olympic Games in Sochi. Returning to SKA would not shut off future opportunities in the NHL for Bobrovsky; rather, it would give him the opportunity to better unlock his potential.”

St. Petersburg was willing to offer Bobrovsky a very reasonable contract, but the Columbus managers' counter-proposals managed to beat out Medvedev's.

Although the president of the KHL has suggested that he sees Bobrovsky as the national team's primary goaltender at the 2014 Olympics in his home country, the coaching staff is far less enthusiastic about this idea.

It does not appear that Bobrovsky will be involved with the national team. He was invited to the team for the first time by Vyacheslav Bykov, before the 2010 world championship, but he did not make it onto the roster.

Bobrovsky's debut on the Russian national team in official games took place at the Karjala Tournament in Turku, where he played as SKA's goalkeeper. Zinetula Bilyaletdinov played Bobrovsky in only one of three games.

Even stranger events took place leading up to the 2013 world championship. All Russian goalies in the NHL had the option of going to the championship, but, for some reason, the roster included Bryzgalov and Semyon Varlamov, but did not include the Vezina Trophy holder.

The national team's coaches have attributed this to Bobrovsky's fatigue, which he has categorically denied. By the goaltender's own words, he truly wanted to play in the world championship.