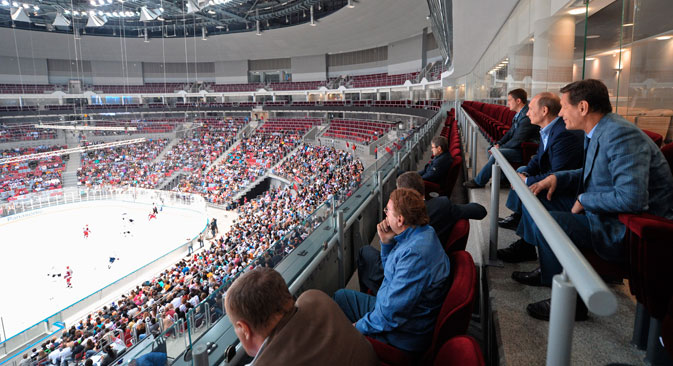 Around 120 NHL players are expected to be on the rosters at the Sochi Games. Source: AP

Fans have been waiting for the NHL to make its decision, ever since the Games in Vancouver. After long and difficult negotiations, the NHL and the Players’ Association have managed to come to an agreement with the International Ice Hockey Federation, ensuring the Games in Sochi will be the fifth in a row to feature the world’s best players.

Just a few months ago, sources close to the negotiations were assuring the world that the NHL had, in principle, agreed to release its players for the Sochi Games—provided that certain conditions be met with regard to player accommodations, insurance, ticket allocation, opening face-off times, etc. And, as always, the most sensitive subject was money. For NHL players to compete in the Olympics, the league has to adjust its schedule and shut up shop for over two weeks—and the North Americans wanted to make sure they would be amply compensated for the money they would likely lose during that period.

Still, such losses are only in the short term: Having your athletes compete at the biggest sporting event in the world can only work to your favor, as interest in ice hockey will increase. The Vancouver Olympics are testament to this. Despite this, no one was in a hurry to make the announcement. Most experts thought that it should have happened back in May, during the World Championships, when active negotiations were taking place. Yet handshakes between IIHF President René Fasel, NHL Commissioner Gary Bettman and NHL Players’ Association Executive Director Donald Fehr were not exchanged until now, just in time for next year’s ice hockey calendar to be finalized.

“The National Hockey League features the most international player population in professional sports, and our outstanding athletes take tremendous pride in representing their homelands on the global stage,” Gary Bettman was quoted as saying on the NHL’s official website. “The decision to participate in the XXII Olympic Winter Games in Sochi was, in many ways, a difficult one, but one that we know will be well received by our players and, most importantly, by the vast majority of our fans and sports fans everywhere.”

INFOGRAPHICS: Sochi 2014: Tickets to the Olympics

This sentiment was repeated by Donald Fehr. “The players are very pleased that an agreement has been reached that will allow the world’s best hockey players to compete at the Winter Games in February. Having the opportunity to wear their nation’s sweater in Sochi is something the players look forward to.”

The NHL will thus take a break from Feb. 9–26, to allow players to compete for their national teams. Around 120 NHL players are expected to be on the rosters at the Sochi Games.

As part of the newly inked agreement, the NHL will be sending seven referees and six linesmen to the Games, to work alongside their European colleagues. However, matches will be played on IIHF-regulation size rinks, which measure 98 feet by 196 feet. This is slightly larger than the rinks used in the NHL; those who have played in Europe, including Russians.

“I’m happy that all the best players will be coming over to Sochi to compete in the Olympics. I think the ice hockey competition will be the most popular competition at the Games. The last two Olympics have shown the level that modern ice hockey has achieved. The final attracted a record number of viewers for any Winter Olympic event ever,” said the Russian ice hockey legend and two-time Olympic champion, Viacheslav Fetisov, in an interview with RIA Novosti.

The news that NHL players will be arriving in Sochi for the Games was surely welcomed not only by the players and fans, but also by the coaching staff of Team Russia. Zinetula Bilyaletdinov now has three superstars of world hockey at his disposal: centers Pavel Datsyuk and Evgeni Malkin, and forward Alexander Ovechkin.

The men’s ice hockey competition will take place on Feb. 12–23. The top 12 ice hockey nations in the world will be split into three groups of four teams for the opening round. The Russian national team will play Slovakia, Slovenia and the United States in the group stage. Its main competition will come from Canada, as well as Sweden, the United States, Finland and the Czech Republic.