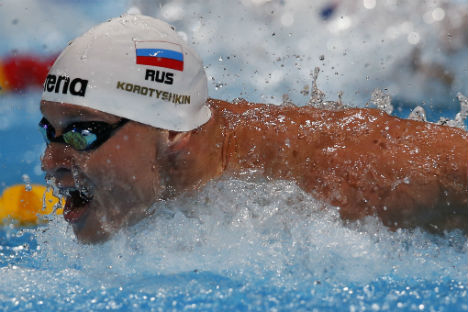 Russia's team received third place in the medal count at the World Aquatic Championships, which came to a close in Barcelona.

Altogether, Russia won nine victories, including seven gold medals for synchronized swimming, and another two by Yulia Yefimova for the women’s 200 breaststroke and the women’s 50 breaststroke. The U.S. took home the most medals at the world championships (33), with China in second place (26). The Russian team won a total of 19 medals (9 gold, 6 silver, 4 bronze).

The Russian synchronized swimming team reaffirmed its status in the sport by winning seven gold medals out of the seven possible, just as it did two years ago in China. However, much was different in Beijing: The team that competed there in 2011 had dazzled in the previous season at the London Games.

Head coach Tatiana Pokrovskaya brought a team to Barcelona on which half were new members. In addition, soloist Natalia Ishchenko did not compete, due to pregnancy. She was replaced by Svetlana Romashina in the solo and by Svetlana Kolesnichenko in the duet.

Still, the Russians did not give the judges a reason to deny them a gold medal in even one of the seven programs—even in the combination that Pokrovskaya had worried about down to the last minute. Moreover, their "Carmen," "Rock," "Marilyn Monroe" and "Michael Jackson" programs were greatly admired by all who came to see the synchronized competitions in Palau Sant Jordi.

Diving: The effect of fatigue

Many believed in the absolute superiority of China in diving, but things turned out differently. The Chinese lost one gold medal to the Germans in the 10-meter synchronized dive. The Russians came to this event immediately following the Universiade, which had been preceded by the European championships and the World League championships. Therefore, they were fatigued while competing in the Catalonian capital.

In addition, the women's team lost their leaders Yulia Koltunova and Nadezhda Bazhina one week before the event, due to injuries. The men's team was able to win two silvers in synchronized events: Viktor Minibayev and Artem Chesakov were left one step away from victory, as were Yevgeny Kuznetsov and Ilya Zakharov on the trampoline. Kuznetsov won silver in the individual event.

Water polo: One step away from a medal

The Russian water polo team did not lose a single match at the world championships until the semifinals, where they went up against the Australians. It was obvious from the beginning that the struggle to reach the finals was going to be difficult, and head coach Mikhail Nakoryakov had mentioned the psychological difficulties of facing this opponent.

PHOTO OF THE DAY: The FINA Swimming World Championships in Barcelona

Unfortunately, these fears were realized. The Russian national team lost not only Australia, but also to Hungary in the match for third place. However, analysts all recognized that the new Russian team has good potential, and Australian coach Greg Macfadden noted that Russians' match with Spain was a highlight of the competition.

Particular attention in these championships was focused on high diving, where the winners were the Colombian Orlando Duque and the American Cesilie Carlton. Russia was represented by Artem Silchenko, who went third before the last jump.

Silchenko received only sixth place, after deciding to take a big risk. However, the Russian diver assured journalists that he is not yet going to end his career and hopes to compete in high diving at the 2015 Aquatic World Championships in Kazan.

Records in the breaststroke and relay

Yulia Yefimova also beat the record for the women’s 50 breaststroke, but it stood only a few hours—from the morning swim until evening. However, the Russian beat Meilutyte and Pedersen, winning two gold medals in the women’s 500 and 200 breaststroke.

The swimming competition started for the Russian team with a bronze medal in the men’s 4x100 freestyle relay, and continued with individual medals in freestyle for Danila Izotov (bronze in the 200) and Vladimir Morozov (silver in the 50).

The day before the last day, the Russian team was one step away from victory in the men's 4x200 relay, and completed the championships with a long-awaited bronze in the women's medley relay.