Naturalized athletes bring in the medals 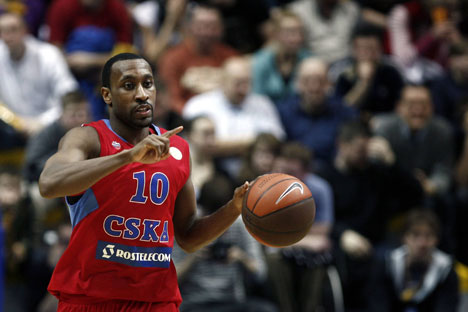 Naturalized champions successfully represent Russia at international competitions. RBTH has compiled a list of the most famous Russian naturalized athletes.

By the end of this season, the Russian athletic team plans to naturalize runners from Kenya and Ethiopia who specialize in medium and long distances. This was announced by head coach Valentin Maslakov, who added that negotiations are already under way with the athletes.

"We are talking with medium- and long-distance Kenyan and Ethiopian runners, and I think that, in the near future—already this year—young athletes will come to us from these countries," Maslakov said in an interview with P-sport. According to him, the African athletes will arrive with their coaches, but Russian specialists will also be involved in their training.

It is common in many countries of the world to naturalize foreign athletes who compete in events in which domestic athletes do not excel. Russia started actively attracting foreigners to compete for its national teams starting in the 2000s.

When he came in 2012 from Athens АЕКА to CSKA Moscow, American John Robert Holden could hardly have guessed that he would be playing in a Russian national team uniform in just a year. However, the talent of this African-American point guard impressed the heads of the army club and coaching staff of the national team so much that he was granted Russian citizenship in the fall of 2003. In a special decree of the president of the Russian Federation that issued the American a passport, it was noted that Holden's skills "hold interest for the Russian Federation."

Naturalization proved a good decision for Holden: The American will be remembered by fans as one of the most exciting CSKA players of the last decade, and it was his shot with two seconds left until the final buzzer that brought the Russian team victory at the European championship in 2007. Holden ended his career in 2011, having, in addition to the Eurobasket victory, nine Russian titles and two Euroleague victories to his credit.

Yuko Kawaguchi came to Russia in 2002, at the invitation of the Russian coach Tatiana Moskvina.  It was in Russia that her dream to compete under the tutelage of the famous Russian trainer came true. Prior to this, from 1999 to 2002, the Japanese athlete lived in the U.S. and competed for the land of the rising sun in pairs skating with Alexander Markuntsov.

Just one year after her debut with the Russian national team, Yuko stood on the pedestal at the European championships and, after another year, at the world cup as well.

Traditionally, many Brazilians have played in Russian futsal clubs.  In 2005, one of the best clubs in Russia—Moscow Dynamo—decided to naturalize its best player, Cirilo Tadeus Cardozo Filho. The brand new Russian not only helped the capital’s club to solve the problem regarding the limit on foreigners, but he also successfully integrated into the national team: At the 2007 European championship, the Russian team won bronze and Cirilo was the top scorer of the games.

Five years later, with the help of the Brazilian-born athlete, the Russians won the silver medal at the 2012 European championship.

Indian Ashwani Chopra basically created the Russian national cricket team from scratch. In 2004, Chopra founded the Russian United Cricket League, and, in 2007, the team played its first game in the sport that is so exotic for Russia. Originally, the team was made up of only Indians and Pakistanis; however, at the 2012 European championships, captain and coach Ashwani Chopra attracted a few indigenous Russians to the team.

The naturalized American basketball player Rebecca Hammon was specifically recruited by the Russian organization to play in the 2008 Olympic Games in Beijing. The national team at that time was sorely in need of a classic point guard.

The 6-foot-5-inch bearded man from the Melbourne Rebels first joined the Russian national team for the 2011 world cup. The colorful Australian received Russian citizenship by proving he had Russian roots through his mother. No one doubts that Burns is highly skilled—he played in the Super 15 League, which includes the best five teams from the strongest rugby countries (Australia, South Africa and New Zealand). However, Burns has not yet been able to become a real leader of the Russian national team.

In 2012, the Korean Ahn Hyun-Soo came to Russia as a real star. He had already won three gold medals at the Olympic Games while playing for the South Korean team.  The only problem was that he had not competed for the national team successfully since 2008—first because of operations on his knee, and then due to stiff competition.

In the words of Alexei Kravtsova, president of the Union of Speed Skaters of Russia, the Korean contacted the Russian officials himself and offered his services to the Russian national team. Bearing in mind the achievements of the Korean and "his profession, which is of interest to Russia," the commission of the president of Russia accelerated the naturalization process. Ahn Hyun-Soo became Victor Ahn. His first start in the 2012/2013 pre-Olympic season demonstrated his level, and he brought Russia a victory at the world cup in Calgary.