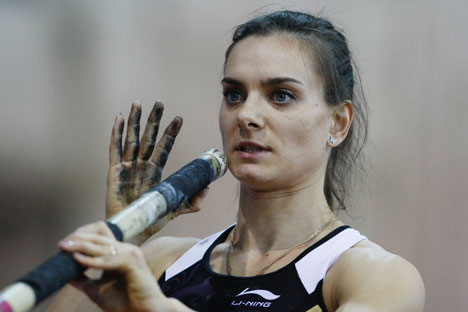 The World Championships in Athletics will be the last competition for Yelena Isinbayeva. Source: PhotoXPress

On Aug. 10, perhaps the most important sporting event of this sports season will begin in Moscow. For Russia, which is hosting its first World Championships in Athletics, this is an opportunity to finally get ahead of the U.S. team at the top track-and-field tournament.

The main stars of this tournament are, of course, Usain Bolt and Yelena Isinbayeva, who can be seen all over the championships’ promotional posters. The sprint king from Jamaica and the "space" pole vaulter from Russia seem to have firmly decided to leave the sport after this tournament.

From Bolt, as usual, the world is awaiting a phenomenal record with the "side dish" of an accompanying pantomime. From Isinbayeva, a beautiful end to a distinguished career is expected—and to end it with gold would be preferential.

Despite these individual dramas, the number one topic of the Moscow championship is something bigger. The history of athletics since the late 1990s is also the story of one remarkable team chasing after another. After the collapse of the Soviet Union, the gap maintained between the leading American team and the Russian team was enormous.

However, by the end of the last decade, the gap actually closed, and Russia nearly beat the U.S. at the World Championships in Edmonton in 2001, having produced the same number of gold medals.

At the next championship held in Paris, Russia was very close to America again. Then followed a period during which Russia handed over some of its position, but the current decade has revived this exciting race.

At the two championships preceding Moscow, Russia was again breathing down the back of the U.S. At the previous World Cup in Korean Daegu, American athletes took only three more gold than Russia. At last year's London Olympics, the advantage (if only top honors are counted) was minimal: America received nine and Russia took home eight.

Thus, the start of the competition in Moscow is an absolute chance to break through the Russian–American barrier. The U.S. team arrived in Moscow in similar form as they showed up to the Olympics—but, perhaps, not stronger than that.

It can be assumed that the outcome of the American athletes’ performances will be about the same. The Russian national team, so as to beat the competition, needs to raise the bar a little — to about 10 gold medals. These 10 victories are actually easily achieved “on paper.”

Before the Moscow championship — due to doping and other reasons far less controversial—several high-class athletes were dropped. For example, the anti-doping services caught almost half of the Jamaican delegation (fortunately, not Bolt), as well as top American sprinter Tyson Gay.

The Russian team also suffered quite serious losses. So, heptathlon world champion Tatyana Chernova will not perform at Luzhniki stadium because of health problems. Yuri Borzakovsky, who, at 800 meters, can always give opponents a nasty surprise, also will not be competing.

However, the ammunition of the Russian team, even with those missing, still looks solid. It includes half a dozen athletes who own season best in the world, a few whose results are only centimeters or a tiny fraction of a second worse than the best, and also the Olympic champions in the 800-meter and 3000-meter steeplechase, Maria Savinova and Julia Zaripova. These athletes are half of the national team.

A gold formula is simple. The Russian team will need to not give away events such as the high jump and walking trails. It needs to minimize the number of misfires in the disciplines in which there is severe competition, such as in the women's hammer throw, where Russian Olympic champion Tatyana Lysenko is one step ahead of the rest.

According to this formula, the Russian team should expect not just 10, but 15 winning performances in Moscow. Tickets to the championship event sold quite well, and the crowd factor also cannot be discounted: The Russian team has, as a rule, slightly raised chances.