Anzhi prepares for a sell-off? 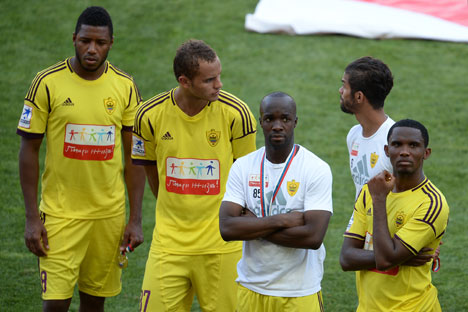 Soccer analysts believe that, instead of being a contender for first place, Anzhi will be competing for a spot in the top eight of the Russian Premier League. Source: RIA Novosti

Makhachkala Anzhi has fallen from the soccer heights and is preparing for the Financial Fair Play of the UEFA. The financial problems of Suleiman Kerimov — head of Uralkali manufacturing and owner of the Dagestani club — have made serious changes in the most talked-about soccer club in Europe.

Makhachkala Anzhi began the current season as the favorite — not only of the Russian Premier League, but of the UEFA Europa League. The club retained their head coach, the experienced Dutchman Guus Hiddink, and made a number of high profile acquisitions.

It seemed that the last names alone of the Anzhi players would intimidate their rivals. Instead, the old soccer saying — "people play soccer, and not money" — once again proved to be true. In the first two rounds, Anzhi was not able to win, and, after the home-field defeat by Moscow Dynamo, Guus Hiddink resigned.

René Meulensteen from The Netherlands — former assistant to the well-known Alex Ferguson for Manchester United — was signed as a replacement. The loss of such a strong and influential leader like Hiddink upset Anzhi fans, but they could not have guessed what else was in store for their favorite team.

Under the leadership of Meulensteen, Anzhi continued to lose points. Then, on July 31, Suleiman Kerimov's Uralkali — the world's largest manufacturer of mineral fertilizer — was devalued by almost 30 percent, losing $5.5 billion.

Read more about soccer in Russia

The drop in value of Uralkali shares on the stock exchange propelled the company back to the value it had when it was first transferred to its current shareholders headed by Kerimov.

Just a week later, Anzhi was defeated in a home game by Krylia Sovetov Samara. On Aug. 6, the chairman of the board of directors of the Dagestani club, Konstantin Remchukov, made several sensational statements: The first was that Anzhi would be "reformatted." Emphasis would be placed on players from the club academy, and the highest paid players would leave the team.

Second, Anzhi's budget would be $66–93 million; by comparison, it was about $160 million last season. Third and finally, the new head coach would be Russian Hadji Hadjiyev, who has been with Anzhi four times already. Previously, he worked on the Makhachkala main team in 1999–2001; he also worked with the team in 2003 and from 2010 to 2011.

The next day, world media outlets were reporting about possible trades of some other Anzhi players. Russian reported on the trade of Yuri Zhirkov and Igor Denisov to Moscow Dynamo; in France, they discussed the transfer of Lassana Diarra to Monaco; in Italy, the talk was about the return of Samuel Eto'o to Inter.

Remchukov tried to reassure fans and analysts, saying there would not be a complete sell-off of players; however, in the same press release, Anzhi leaders announced that Suleiman Kerimov was sick and could no longer be involved in soccer.

The news was like a crash of thunder on a clear day. Kerimov, who owns businesses in various fields, saw his shares begin to fall. After literally half an hour, Kerimov's press secretary stated that the Russian businessman was completely healthy and ready to handle his financial affairs. These serious contradictions between the leaders of the soccer club have left many unanswered questions.

"Kerimov spent more than €300 million [$400 million] on the club and wanted instant success. However, instead of results, he saw a team in which the foreign players and the Russians players don't talk to each other, and top managers are constantly asking for money," said Varga.

"Apparently, Kerimov held a number of business meetings with soccer people and decided to change the recruiting style of Anzhi. In two years, all European clubs will have to adhere to the new Financial Fair Play of the UEFA: Clubs will be able to spend only as much as they earn; private owners of the clubs will be allowed to invest their own money only to develop junior soccer teams, and not in new players. Anzhi should be ready for this, because Russian clubs earn very little, and all of them except CSKA operate in the red.   Kerimov probably took this advice into account and now wants to teach his club to live within its means," said the expert.

Kerimov has been the owner of Anzhi since January 2011. During this time, the entire soccer world has come to recognize his last name. First, the honorary citizen of Dagestan invited famous Brazilian Roberto Carlos and Dutch coach Guus Hiddink to his club; then, he made Cameroonian Samuel Eto'o the highest-paid soccer player in the world ($26.6 million per year); finally, he began to buy up all of the best Russian soccer players.

Catching everyone by surprise, the next step was to invite a Russian coach and slash the budget. Soccer analysts now believe that, instead of being a contender for first place, Anzhi will be competing for a spot in the top eight of the Russian Premier League.