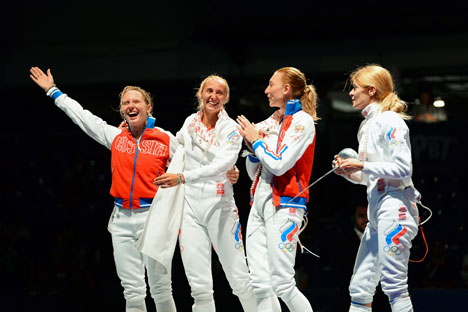 The success of the Russian fencing team at the World Championships gives reason to hope for a shower of gold medals at the 2016 Summer Olympics in Brazil. Source: AFP / East News

Team Russia has come away from the Fencing World Championships in Budapest, Hungary, with a total medal tally of 11 – three gold, five silver and three bronze – comfortably taking first place in the final medal count. China, heavily favoured before the championships, finished way behind.

The tournament began on August 5, with two days of exhausting qualification rounds before the medals went up for grabs. Team Russia was clearly out for revenge after a disappointing performance at the London 2012 Olympic Games, which saw the team scoring only one bronze in the men’s competition and two silvers in the women’s competition.

Inna Deriglazova won Russia’s first medal, winning a bronze in individual foil. After tearing through her tournament bracket, she lost out to eventual winner Arianna Errigo from Italy.

Team Russia added two more medals to its tally later that day, when Veniamin Reshetnikov topped compatriot Nikolai Kovalyov by a score of 15–13 in the all-Russian individual sabre final. The medals were the first of their professional career for both men. Pre-tournament favourite Nicolas Rousset of France went out during the second round.

The next day, Team Russia strengthened its position at the top of the leaderboard. Anna Sivkova narrowly missed out on a gold medal in a dramatic women’s épée final against Estonian Julia Beljajeva, while Pavel Sukhov took bronze in the men’s competition.

Meanwhile, Dyachenko had a real shot at the gold; in the final against Ukrainian Olha Kharlan, she trailed 8–1 after the first period, but was able to take the initiative in the second period and tie the score at 12–12. A miracle was not in the making, however, as Kharlan ended up closing out the contest with a score of 15–12.

The Russian women’s épée team decided to avenge Dyachenko’s loss by beating China in the final. Meanwhile, the men’s épée team finished 13th after a lacklustre performance in a competition eventually won by Hungary.

The final day of competition turned out to be the most exciting. The women’s team sabre event will be remembered for a long time. The Russian and Ukrainian teams traded point for point until the very end.

The final duel was fought between Olha Kharlan and Dina Galiakbarova. Towards the end of the contest, the Ukrainian won three consecutive points that put her team in the lead with a score of 44–42, before Dina pulled back and drew level at 44–44. It was Kharlan who had the final say, winning the deciding point and bringing her team to victory.

Women’s épée head coach Aleksandr Glazunov was extremely proud of the Russian team’s achievements. “The girls performed really well in the individual events, and they were simply outstanding in the team competitions. Every single girl went out there with a great attitude and the desire to win. And they all come from really strong fencing school. These things played a significant role in their performance at World Championships. As far as the season is concerned, our preparations for the competition turned out to be spot on. The men’s team didn’t do badly either, but they know they still have some improvements to make.”

The success of the Russian fencing team at the World Championships gives reason to hope for a shower of gold medals at the 2016 Summer Olympics in Rio de Janeiro, Brazil. “We have a young team that is capable of achieving a great deal. We’ve just got to keep improving, as well as strengthening the team’s mental toughness,” Glazunov said.