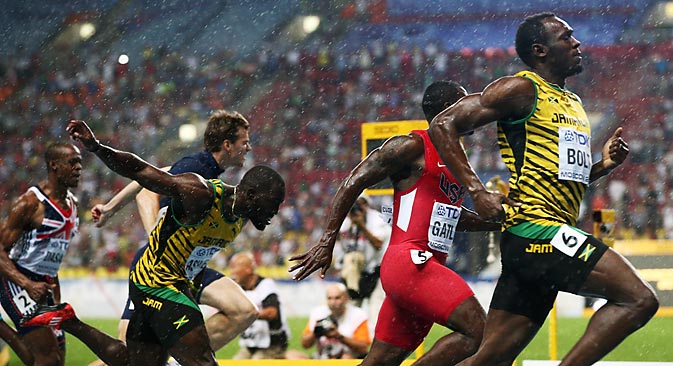 The final jump of Isinbayeva, the lightning-fast run of Bolt, the double finish of Lashmanova and other memorable moments of the World Athletics Championships.

The Moscow competitions will be remembered not only for the medal count, but for many other highlights and emotions: pain, frustration, tears, and intense joy.

Victory seemed assured in Moscow for the fastest person in the world — Usain Bolt.  The Jamaican sprinter did not disappoint the Russian crowd. The men’s 100-meter winner was not deterred by rivals or the weather.

Even with lightning and sheets of rain, Bolt did not give the other competitors a chance. The Jamaican runner won his favorite 200-meter event and gave Muscovites a Russian-style farewell dance afterwards.

Bolt left Moscow an eight-time world champion, and his plans for the future are no less grandiose:  “I don't count medals, just try to do something that no one has ever done before. That is why I want to go to Rio. I had a dream to become a legend. I fulfilled my dream at the Olympic Games in London. I want to be undefeated!”

Yelena Isinbayeva did not set 28 world records, but she nevertheless left the Moscow audience wild with excitement after her 4-meter-89-centimeter jump. Her victory in Moscow was a perfect finish to the Russian pole-vaulter's outstanding career.

“I wanted to leave a good mark,” she said. “And I had a decent result, winning the gold medal. Now, if I'm not able to return, I will know that I left with a clean heart ... This victory is the most special to me in my career.”

Tears and an Anthem

The Russian women's team victory in the 4x400 meter relay has been a very long time coming: Therefore, after the finish, the athletes did not hide their emotions.

Antonina Krivoshapka, the final leg of the Russian four, did not hold back her tears in front of reporters: "For the past few years, we have come in third, second, and I really wanted finally to win. Until today, I ran in so many relays, stood on the pedestal and heard someone else's anthem. And today I heard ours, on the home field, when there was such wild support from the crowd. And I started to cry."

London's Olympic champion Yelena Lashmanova was almost deprived of Moscow gold in the 20-kilometer racewalk because of an unfortunate misunderstanding.

After she entered the stadium, she ran 100 meters and stopped — but there was still a full lap to go before the finish.

Fortunately, someone told the athlete that the race had not yet ended, and the drama did not become a tragedy.

Many athletes in Moscow did not hide their feelings. Robert Harting of Germany, winner in the discus throw, tore off his shirt immediately after his victory, as he has been known to do before. After winning the steeplechase, Ezekiel Kemboi tied the Kenyan flag to himself and did a national dance.

The Moscow World Championships became a nightmare for many recognized favorites.

An entire group of London Olympic champions failed to pull off the same victorious results. Disappointing failures, however, were offset by some pleasant surprises.

One of the pleasant surprises was the success of long jumper Alexander Menkov. The 22-year-old from Krasnoyar not only became the world champion with a jump of 8 meters and 56 centimeters, but he beat the Russian record twice and is now ready to think about beating the world record.

“The last attempt today was very long, but I was too emotional, had so much adrenaline in my body that I just overran,” said Menkov. “But I am sure that, one day, I will have the perfect jump, and it will be close to the world record!”