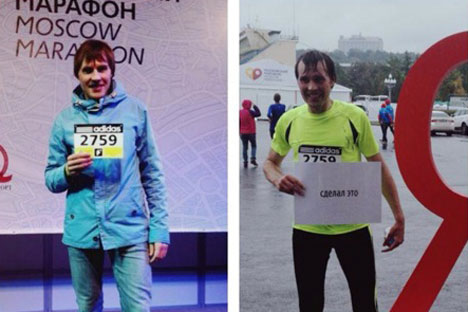 Business coach who ran in the city’s first ever marathon talks to RBTH about how goal setting and focus brings about results in sports and the corporate world.

Victor Salamatov before and after the Moscow Marathon. Source: Personal archive

On a cold and cloudy Sunday morning, when the roads of the Russian capital wore a deserted feel, Victor Salamatov, like a few thousand other Muscovites, ran in the city’s first marathon. Conditions were far from ideal in the city, where autumn has well and truly set in, but there was a determination on the minds of many of the capital’s residents who saw the run through.

As the pain of more than 41 kilometres caught up with him, Salamatov, put in one final burst as he raced on the athletic track of the famed Luzhniki stadium to complete the Moscow Marathon.  “It’s all about unlimited human potential, setting goals and overcoming challenges,” says the 30-year old, who ran his first marathon in an impressive 3 hours and 47 minutes.

Salamatov, a professional coach, runs his own executive coaching and leadership development firm. He works with private and corporate clients, varying from Russian state-run organizations to small and very successful businesses as well as major international firms.

Photo of the day: Moscow International marathon in Luzhniki

The concept of business coaches originated in the United States and famous life coaches like Jack Canfield, author of the ‘Chicken Soup for the Soul’ series and Robin Sharma, author of ‘The Monk Who Sold His Ferrari’ and ‘Lead Without a Title,’ also coach corporates. In Russia, however this is still a new and novel concept that is just beginning to become acceptable for organisations.

Salamatov says that some corporates think that coaching doesn’t fit into their professional culture, as they are used to being managed from the top. “They are not used to giving people space to grow, innovate and lead by themselves.”

Running the marathon was in a way, a reinforcement of the main principles that he applies in coaching his corporate clients. “The first principle is that our potential is only limited by ourselves and we are capable of doing almost anything,” Salamatov says. “The second- clarity of where you are and where you want to be is critical to success. And the third- action is the only thing that matters.”

In this way, long-distance running and business have a lot in common, he says while adding that the core element that binds them and brings success is goal-setting and the ability to overcome challenges and find inner and outer resources for that.

Setting a goal for a finish time between 3 and a half and 4 hours, he finished within that range. “Whether it’s running or business, you have to make measurable and precise goals,” says Salamatov.

“Often, you talk to a client who says ‘I want to be more successful in my career.’ When you ask a question ‘what does that mean?’ he or she starts to formulate this ‘more successful’ definition. And surprisingly, it comes to more balance between work and life or more new projects, or a greater impact on the organisation or society. So more successful is a very broad definition and we all imply different things into this.”

He stresses on goals with corporate clients setting guidelines such as when, how much time resources the client can invest. “It makes you think differently,” he says. Essentially business coaches work on setting the goals with clients and the follow through process to seeing them through and help overcome challenges that they face along the path.

“In a marathon, you set a goal in timing, then set a pace and follow that through to the desired result. You have challenges to overcome too, you have you physical body which may not be trained well, but if your mind is firm, you can ignore any of the tempting thoughts to stop, take a break or decrease the speed”

‘Road to Sochi’ project set to run across the US

“There is always scope for improvement in life as well as in business,” Salamatov says adding that the biggest corporate growth comes from constant improvement and innovation.

Russians have a tendency of thinking big and aiming for the cosmos. Such attitudes helped the country win the Space Race and send he first man and woman into orbit. But what is often lost in the country is the ability among many decision makers to carve out small steps to reach the bigger goals.

“We are more interested in external changes, than internal,” Salamatov says. “And we forget that many great strategies, fail on the implementation stage – where you have to make the real steps, one after another until you reach your goal. And this is boring… It is much easier to make up another huge goal, write another great strategy and then again and again.”

More: Making Moscow a city for runners, one step at a time

Running marathons according to the business coach is as much about taking responsibility for and control of a current situation. Many Muscovites complain about the weather, the lack of running facilities or even a non-sporting culture among those who are not professional athletes.

But more than 7,000 enthusiastic participants turned up in the early hours of Sunday morning to run in the marathon. With a renewed focus on sports in Russia as living standards improve, the country looks set for fresh thinking both in healthier lifestyles as well as in professional and corporate attitudes.

“Now as the world becomes more open and interconnected, it is time to borrow the best practices from every sphere,” Salamatov says. “Professional athletes are the examples of the highest dedication, constant development, precise goal setting and hard work towards attainment of the goals. So businesses can borrow their principles too thus improving results and adding more fun and sport into their own routine to bring large goals in reality.”