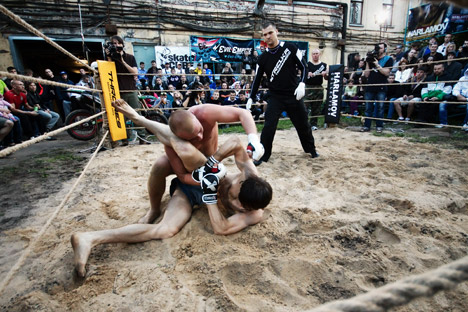 Each week, there are at least 10 MMA championships in Russia in which enthusiasts can participate. Information about these is disseminated through social networks and on forums of Internet websites that are dedicated to martial arts. Source: ITAR-TASS

Mixed martial arts (MMA) is booming in Russia. Fighting tournaments are held weekly, and even those who have no sporting experience are allowed to take part in them. A Russian Reporter correspondent found out why ordinary men are choosing to get in the ring.

"We made it so that some people began to fight here with us; others wanted to fight with us and started talking about us all around. It cost us $400," says Apinyan Greg, with pride in his voice.

Apinyan is a 29-year-old resident of St. Petersburg and the organizer of championships in mixed martial arts for The Arrow.

In two years of existence, his fighting tournaments have grown from a $400 get-together into one of the leading players on the Russian market for MMA. Eight million views of The Arrow accumulated on YouTube, winning the World Press Photo contest nomination for "Best History of Sporting,” the battles in the Petrovsky soccer stadium (the home field of St. Petersburg’s Zenith club)—these are just some of the achievements of Apinyan and the company.

The secret of the success of The Arrow lies in the arrangement allowing ordinary enthusiasts to participate, including those who have never engaged in combat. Furthermore, The Arrow is a street championship: Its participants fight in the open, on sand, grass, or on a bare ground.

"This is something that sets us apart from traditional MMA tournaments,” says Apinyan. “Their format scares off many viewers—an octagon, people in a cell, blood, all scary and dark. Our championships are another thing—sand, blue sky, the sun. And the most ordinary people sometimes exhibit such strength of spirit, it makes you wonder."

The combat rules of The Arrow do not limit fights with time: The fights go until one of the fighters gives up or the match is stopped by a judge. The record battle in the history of the championship lasted 40 minutes without a break. All the rest is the same as in classic MMA: Combatants wrap their hands, they are allowed to strike with their hands and feet, and fights take place in an arena.

In two years, The Arrow held 11 MMA tournaments in St. Petersburg and was noticed and taken under the wing of the American company Tron, which specializes in the organization of tournaments in MMA.

Each week, there are at least 10 MMA championships in Russia in which enthusiasts can participate. Information about these is disseminated through social networks and on forums of Internet websites that are dedicated to martial arts. The geography of these tournaments is extremely broad.

Altogether, this means that an impressive number of men for whom fighting is not a profession finish their work-related duties on Friday, say goodbye to colleagues until Monday, and go to earn extra money with their fists. Or, if money is not offered, they go to prove themselves to the world.

Alexander Anisimov is a 30-year-old employee of a construction company in Vladimir. To debut in MMA, he chose the harshest of the versions: T-1. The letter "T" stands for "total." According to the rules of T-1, opponents fight in shoes with hard soles. Strikes with the head are allowed, as well as finishing off an opponent with feet, if he does not give up. The organizers had originally required participants to fight with their bare hands, without gloves, but the fighters themselves opposed this. "Not everyone was ready to overcome the psychological barrier for bare-knuckle fighting," says Herman Lviv, president and promoter of the T-1 league.

When asked what forced him to leave his wife and infant son in Vladimir to travel to a foreign land to fight, Alexander Anisimov said: "It became interesting. The interest was satisfied." And, at least in the near future, there will be no more fighting in his life.

Interest is what attracts many amateurs to MMA. However, participation in the matches can become a way to earn money. According to the Russian Federation of Pankration (the organization aiming to obtain Olympic status for MMA), the pay for first place in the amateur tournaments varies around the country in the range from 30,000–50,000 rubles ($940–$1,570). Members themselves recommend far more modest amounts— around 10,000–20,000 thousand rubles.

Illegal fighting is a theme that somehow, sooner or later, pops up as soon as it comes to the topic of MMA fights. Internet searches for "underground fights in Moscow" provide links to a series of journalistic reports. All of them are written in an extremely hard manner, are full of details and, most likely, contain not a word of truth.

"In the shadows of a nightclub, guys are gathering with fists like sledgehammers. Losers often leave the arena on a stretcher," writes one of the authors. Another depicts an atmosphere even more ominous: "Moscow police started to discover the bodies of young people. Clear signs of a violent death indicate that the boys were killed in fights. After some time, a terrible truth was revealed: In Moscow, clandestine fights were held. Most real battles are to the death."

The capital's police department of the Arbat district denies the existence of bloody, clandestine battles. This was the very area that created legends in the late 1990s. There were rumors that the most terrible tournaments took place in the gambling establishments on Arbat. "Even if it ever was, it has been gone for time,” says a department officer who asked not to be named. “Today, we hold no data on the informal fighting tournaments.”

The President of the Russian Federation of Pankration, Vladimir Klenshev, agrees with this assessment. "There is more noise around so-called street-fighting games than actual facts,” he says. “Yes, we have the information about these tournaments. But almost always this is an initiative of young teenagers who have seen too many movies. The fights there end with a couple of broken noses, and, the next day, the same youngsters start to do parkour or something else that they have seen on TV."

A boom around amateur MMA makes official organizations cautious. "All of these battles lack the main component of sports: children's sections; systematic, comprehensive work with young people. All that I can see is the desire to earn,” says Klenshev.

Alexander Yemelyanenko to enter the ring in November

Klenshev proposes following the example of Fjedor Emelianenko, the legendary MMA fighter. He has set it all the right way, believes the president: Fjedor trains youth and, by example, directs them toward the right sporting channel.

Tolga, a 21-year-old from Uzbekistan, arrived in Moscow and, unlike the president of the Federation of Pankration, met the amateur tournaments in MMA only with enthusiasm. Six days a week, Tolgat repairs sidewalks on Leninsky Prospekt as a member of a construction team. Then, if he still has some strength left, he goes to the park to train. After pull-up work, Tolgat begins mastering strikes.

In his homeland, Tolgat was involved in Thai boxing, for just a year and a half. He had heard that, in Moscow, even that could be enough to enlist in the fights and become a star. "Building—this is not my life,” says Tolgat. “The main thing is fighting.”

The same way as Tolgat, other men work out their attacks. They do it in gyms, in parks, in the corridors of apartment buildings while waiting for the elevator, or in their own kitchens, while no one is looking. They may be working as programmers, sales managers, freight forwarders, at any job: But the main thing is that this is not their job. The most important thing is fighting.