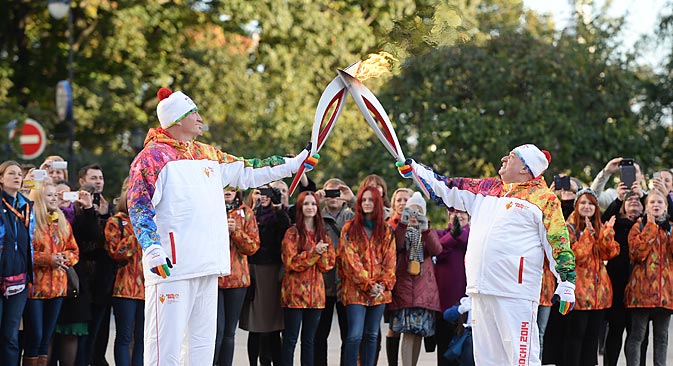 The Olympic torch relay through the streets of the Russian capital ran into some problems: The torch’s flame died out four times in the hands of torchbearers. Athletes and officials, however, are asking that this situation not be dramatized.

On Sunday, Oct. 6, the most ambitious Olympic torch relay in history began in Moscow. However, unusual events occurred on the very first day. The flame died out in the hands of Shavarsh Karapetyan, an 11-time world champion in diving who was one of the first participants of the relay.

Almost immediately, the Olympic flame was ignited again with lighters, but strange photos of this incident quickly spread all over the world.

The problems with the torch did not end there. On Monday, the flame of the 22nd Olympic Winter Games in Sochi died out for the second time, during the relay through Moscow streets. The incident happened on Raushskaya Embankment, not far from the Kremlin.

In videos filmed by witnesses and posted on YouTube, the audience welcomes the torchbearer, he waves back, and, shortly afterward, the torch dies out; the relay support team runs up to the torchbearer with spare torches, and then the athlete continues running.

The third incident took place during the Moscow relay on Mosfilmovskaya Street, when the flame went out as the torchbearer was transferring it to a woman. The final case of the flame extinguishing was in front of the Mosfilm building itself.

Dmitry Chernyshenko, Sochi Olympic Organizing Committee president, noted on his Twitter page that the cause of Sunday's incident was the fault of an employee who failed to open the valve fully. There were no official comments about Monday’s incident. 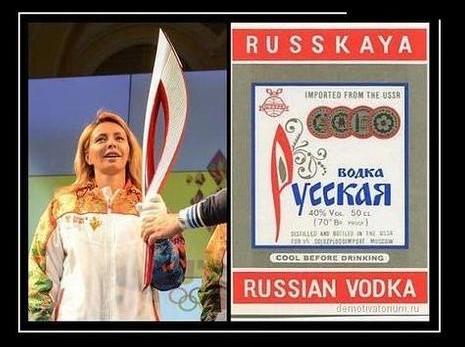 Viral in Russia - Olympic flame: Off to a flaky start?

The story is doubly unpleasant, since the designers of the torch recently asserted that the Olympic flame would never die out under any circumstances.

“Our fire must not die out after covering the long distance from Kamchatka to Sochi, and it must withstand different climatic conditions. The torch may die out only by the will of man,” Andrei Vodyanik, the designer of the Olympic torch, told Vedomosti in January.

This nine-month-old quote was spread around by Russian bloggers, focusing on the lack of correspondence between the significant expenditures for manufacturing the torch and the quality of the final product.

Historically, there are many other instances of the Olympic flame dying out during the torch relay. On April 8, 2012, the flame of the London Olympic Games died out while the British junior rafting team was passing the training track, as RIA Novosti reported.

The names of Olympic torchbearers are announced

Shavarsh Karapetyan, in whose hands the Olympic torch died out for the first time, does not consider this incident to be a bad omen. “I have never paid any attention to superstition. If a gust of the wind extinguished the torch for a moment, that's not a reason to look for some mystique in the occurrence,” the athlete told Gazeta.ru.

“There are guys throughout the entire distance of the relay who have special lamps with the real Olympic flame. The beginning of the story of lighting of my torch with a lighter spread over all TV channels and news feeds, but this had a happy conclusion as well.

The temporary fire was also extinguished and my torch was re-lit from the real Olympic fire. The great tradition was not broken,” said Karapetyan.

The three-time Olympic figure skating champion and State Duma Deputy, Irina Rodnina, also does not see anything wrong in the fact that the Olympic flame died out. “You should not look for the negative side in this incident: It happens many times and at different stages of the relay.

The same happened at the rehearsal for the Moscow Olympics 1980, but everything was all right, we conducted the Olympics, everything went great,” Rodnina said.

Video: The Olympic Flame begins its journey across Russia

Meanwhile, in Vladimir, where the Olympic flame will arrive only on Oct.16, one of the relay participants is already trying to sell his torch via the Internet. Timur Rahmizyanov, an ordinary student, won the right to run 655 feet through his city for the Olympic relay.

Rahmizyanov put the torch on the Internet auction site at an initial price of $500. In the “Item condition” section, Timur noted that the torch is brand new, unused and undamaged. Formally, there is nothing criminal in this story, as each participant of the Olympic torch relay receives a torch and a relay uniform as gifts.

The relay, which began on Oct. 7 in Moscow, is the most ambitious of the national Olympic torch relays in history. It will pass through nearly 3,000 towns and last for 123 days, over which time the flame will have covered more than 40,390 miles. The relay will end in Sochi on February 7, 2014, on the opening day of the Olympics.

Based on materials from Gazeta.ru, Izvestia and RIA Novosti