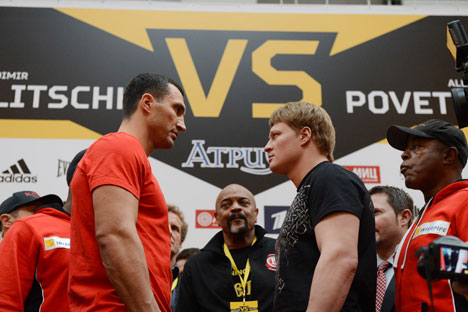 The Klitschko-Povetkin fight was more than a battle between heavyweights – it was class warfare.

“Don’t listen to the referee - smack him!”

With those words, a star was born.

When Wladimir Klitschko pummeled Alexander Povetkin to defend his heavyweight titles earlier this month, the result was no surprise and the action rather drab, but the ringside heckling was pure class.

Povetkin-Klitschko: A fight 5 years in the making

As Ukrainian Klitschko used his superior reach to keep his Russian challenger at bay in the early rounds, an unknown man sitting near one of the ringside microphones found his voice.

“Keep it calm, Sanya, keep it calm,” he shouted, anything but calm, using Povetkin’s pet name, then turned it up a notch when a Povetkin jab found its target: “Again, man, do it again!” - all of it crystal clear to the millions watching the broadcast.

Fed up with Klitschko’s habit of clinching when Povetkin got it too close, the Russian challenger’s booster screamed: “Coward! Come on, hit the coward!”

But then the Ukrainian champion caught Povetkin with a vicious left hook at the end of the second round - not enough for a knockout blow, but enough to send the Russian to the canvas, giving Klitschko undoubted control of the fight.

Three more knockdowns followed in later rounds, and the overactive fan’s belief in his hero Povetkin began to sag. He kept up the volume, but much of the energy was gone as he implored the challenger to find the strength for a knockout blow.

With the sound of the bell in the 12th round, the previously unbeaten Povetkin suffered a unanimous loss on points and his fan shot to Internet stardom.

From inside the hall at Moscow’s Olimpiisky Sports Complex, the heckler was inaudible, drowned out by hundreds just like him - loud, fiercely nationalist and probably none too sober.

For them, Povetkin was a hero. A kindred spirit, patriotic and uncomplicated, the essence of a Russian muzhik.

Muzhik-ness is a curious concept  - the best equivalent is an ordinary Joe, a bloke if you’re British, but with something more. From a word originally referring to a peasant lad in Russia’s centuries of serfdom, muzhik has become a way of life - anti-intellectual, chain-smoking, a man who’s happier with a beer in the yard than a fine wine in a restaurant and who wants the world to know it.

Povetkin is the muzhiks’ hero precisely because he is one of them, a rough-hewn nationalist who entered the ring Saturday to a kitsch medieval-style folk song celebrating a semi-fictional Russian golden age.

The man who beat him could not be more different. The Klitschko brothers are unique in boxing history, urbane champions comfortable to converse in at least four languages. Older brother Vitali has the WBC heavyweight belt and a PhD.

The Klitschko brothers’ multilingualism and globetrotting - childhood in Poland, based in Germany, frequent spells in the U.S. - are reminiscent of emigre Soviet intellectuals, and their commercial acumen in the cut-throat world of boxing has echoes of the oligarchs.

Povetkin’s image is built around rejecting all of that. He rarely speaks in public, let alone in a foreign language, preferring to the stridently nationalist messages on his T-shirts do the talking.

Wladimir Klitschko and Alexander Povetkin’s paths both began in the 1980s Soviet Union, but what has happened since their fight shows how they have diverged.

Klitschko has been confirmed as half of a full-on Hollywood power couple after his girlfriend Hayden Panettiere confirmed their engagement, while Povektin has largely disappeared from the scene.

His muzhik identity, though, is all over the news. As race riots gripped southern Moscow this week, some of the slogans shouted (“Russia for the Russians!”) were not a million miles from the ethnic-Russian sentiments of Povetkin’s entry into the ring.

The final bell may have rung for Klitschko-Povetkin, but the post-Soviet culture war rumbles on.