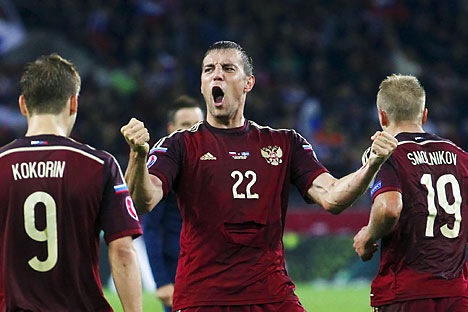 Reuters
With discredited FIFA President Sepp Blatter and his associate and UEFA boss Michel Platini having been banned from soccer administration for three months, new fears have surfaced about the future of the 2018 World Cup in Russia. However, Russian analysts do not believe the latest scandal to hit football’s corruption-plagued governing body will affect Russia’s tournament.

Speculation about the fate of Russia’s 2018 FIFA World Cup has again surfaced after Joseph “Sepp” Blatter, president of FIFA, soccer’s international governing body, and Michel Platini, head of UEFA, the European league football administration authority, were both banned from football for 90 days.

Since the ban order of October 8, both officials are not only prohibited from coming to their offices, but also from taking any assignment related to football.

The FIFA ethics committee decided to ban international soccer administration’s two top officials after launching an internal investigation into their conduct. The Swiss Federal Justice Bureau opened a criminal case at the end of September against Blatter, who is suspected of negligence and theft, and of bribing Platini, the former French soccer captain. Investigations are on but no accusations have yet been levelled against either Platini or Blatter. Their disqualification can be extended for another 45 days, if required.

FIFA has spent much of the last few years mired in accusations of corruption. The decisions to award the 2018 and 2022 World Cups tournaments, to Russia and Qatar respectively, have widely been viewed by global media and senior sports administrators as having been done irregularly, and suspicions of bribery continuing to hang over the process.

Russia is not under suspicion

Sports lawyer Valery Fedoreyev said the ethics committee has made the right decision but does not believe that the investigation will have “any impact” on Russia.

“In order to take away the World Cup from Russia the decision must be made at the level of the FIFA Congress,” said Fedoreyev. “So even if Blatter is found guilty of corruption, this will not affect Russia. The investigation does not include Russia, or Qatar.”

He added an internal FIFA investigation had found no evidence of wrongdoing in the voting process for the two tournaments.

Could economic reasons have an effect?

There has been only one time in the history of organised soccer when a hosting country was deprived of the World Cup. Colombia in 1984 was forced to forfeit the 1986 tournament, for economic reasons, after which the championship was transferred to Mexico, which had already hosted it in 1970.

Alisher Aminov, football expert and Vice President of the International Foundation of Legal Initiatives, believes that given its current position, Russia should follow in Colombia's footsteps, independent of what happens to Platini and Blatter's.

"Blatter and Platini's reputations are under threat. Russia is not affected by this process and the championships will take place. But in the context of the economic and political situation this entire story is creating mixed feelings,” he said.

“The mad expenses on soccer and the possibility of a social explosion – these are phenomena from the same reality. In the conditions of political isolation and with the Russian banking system on the verge of collapse, these enormous expenses on the World Cup are self-destructive.”

Deputy Sports Minister Yury Nagornykh does not agree with Aminov: "We are completely realizing all the plans concerning infrastructure construction and are respecting the budget. Which is why talk about opting out of holding such a prestigious tournament looks groundless. As for Blatter, no accusations have been made against him. It is not excluded that very soon the prosecutors will close the case."

Is Platini still in the game?

The new FIFA presidential elections are set for Feb. 26. By then Platini's disqualification will have ended, but a special FIFA committee will have to confirm the candidature of the main contender for the presidential seat, conducting an additional check on the Frenchman.

In the view of Valery Chukhry, ex-director of FIFA's Moscow's office, Platini is the only person who can create order within FIFA. Chukhry is also certain that the UEFA president views Russia in a positive light.

"Just take the story of Crimea for example, when UEFA was able in this extremely difficult situation to respect the interests of all sides, demonstrating [its] equidistance from all political forces. [In view of the disagreement over Crimea's political status UEFA has decided to create a separate championship on the peninsula – RIR] Also, St. Petersburg has received [some] Euro 2020 matches. When Platini was pressured to impose maximum sanctions on Russia, he adhered to the sporting principle."

Targeting FIFA and Russia: Why the US is playing foul