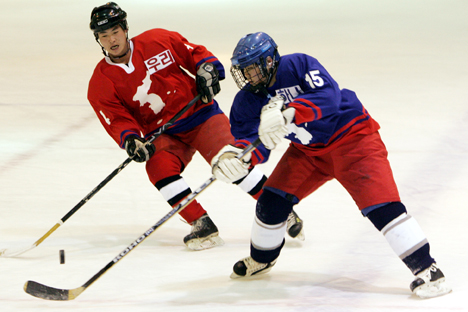 Ice hockey is only taking its first steps in many of the Asian countries. Source: AP

An ice hockey club being established in China for participation in Russia’s Kontinental Hockey League will be financed by Russian and Chinese business.

The development of ice hockey in China with Russia’s assistance is supported at the top state level, First Vice-President of the Russian Ice Hockey Federation Roman Rotenberg said at a TASS press conference on Russia-China strategic partnership on Monday.

Soviet ice hockey legend and member of the board of directors of Russia’s Kontinental Hockey League (KHL) Vyacheslav Fetisov said earlier the issue of including one or two Chinese ice hockey clubs into KHL had been a decided matter after talks between the leaders of Russia and China.

"I was in Beijing recently together with Chairman of the KHL Board of Directors Gennady Timchenko and we held a lot of meetings at the state level. The focus is on infrastructure and the number of ice hockey players. This is the foundation. So far, there are not many persons in China playing ice hockey. There is support for that. Serious work is under way in this direction," Rotenberg said.

"The task is to build a hockey vertical: a KHL team, a second team playing in the Chinese league, a team in the youth league and mass involvement so that all who wish can play ice hockey and there should be more ice rinks that are public and open for all. This is a priority task," Rotenberg said.

A working group has been established to deal with these issues, the first vice-president of the Russian Ice Hockey Federation said.

"We’re also looking at the commercial aspect. So, we get two different roadmaps, which we’re uniting," Rotenberg said.

"A Chinese club will be playing KHL ice hockey matches on the arena that houses the Beijing basketball club. Basketball and figure skating show that the Chinese can achieve success in ice hockey as well," Rotenberg said.

Currently, 28 clubs are playing in the KHL, including Barys from Astana (Kazakhstan), Dinamo from Minsk (Belarus) and Dinamo from Riga (Latvia), Jokerit from Helsinki (Finland), Medvescak from Zagreb (Croatia) and Slovan from Bratislava (Slovakia).

An ice hockey club being established in China for participation in Russia’s Kontinental Hockey League will be financed by Russian and Chinese business, Rotenberg said.

The first vice-president of the Russian Ice Hockey Federation said earlier the Chinese club would be based in Beijing and was scheduled to play its first KHL game in September 2016.