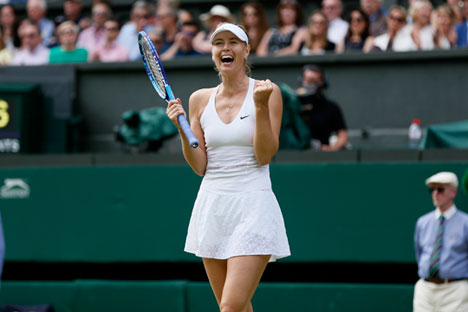 Reuters
Media reports cited Sharapova’s agent Max Eisenbud as saying that this year’s quarterfinal match between Russia and the Netherlands would be allegedly the last for her playing for the national squad.

Russia’s titled tennis star Maria Sharapova told TASS on Friday it was too early to speak of her career’s end as part of the national team and the 2016 Federation Cup’s quarterfinal encounter against the Dutch team this weekend would be possibly not her last time playing for Russia.

"It is very premature to say that I will be not playing for the Russian national team at the Federation Cup [series] and the encounter against the Netherlands will be the last one for me," Sharapova said in an interview with TASS.

Earlier media reports cited Sharapova’s agent Max Eisenbud as saying that this year’s quarterfinal match between Russia and the Netherlands would be allegedly the last for her playing for the national squad.

"The season has just kicked off and I do not know how it will be developing for me," the 28-year-old tennis star said.

Sharapova, who is currently World’s No. 6 in the ranking list of the Women Tennis Association (WTA), repeatedly stated earlier that her main goal this year was to play at the 2016 Summer Olympics. However, the 28-year-old tennis star, needs playing for the national team in order to qualify for the 2016 Summer Olympic Games in Brazil’s Rio de Janeiro.

In line with the regulations of the International Tennis Federation (ITF), a player must perform for the national team at least three times over the course of a four-year period. Last year, Sharapova played for the national squad twice and it was the 2015 Fed Cup quarterfinal encounter against the team from Poland and then the final match against the Czech team.