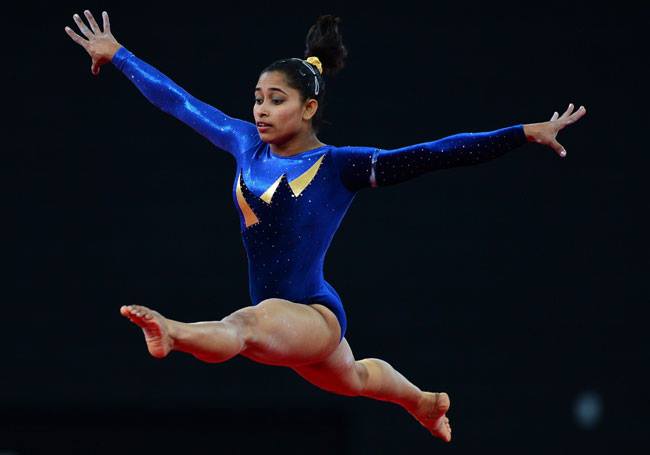 Press Photo
Not only in the strategic sphere, Indo–Russian partnership extends to sport and is giving India hope that the country may finally win a medal at the Rio Olympics. There has been cheer for Russian gymnasts, with the men’s team coming second to Japan and winning the silver medal. Indians are hoping for similar cheer from the first ever Indian gymnast to qualify for an Olympic final, using a very difficult manoeuvre named after its Russian creator, Yelena Produnova.

India has faced only disappointment so far at the Olympic Games at Rio de Janeiro, with not a single medal to show after a week of the games. Russia, too has faced disappointment with many of its iconic athletes, like pole vault queen Yelena Isinbayeva, unable to compete at Rio because of a doping scandal over some Russian sportspersons.

Indian fans have their hopes pinned on Dipa Karmakar, the first Indian gymnast ever to find a place in the Olympic finals. The 23-year old Karmakar qualified for the finals with her performance of an extremely difficult manoeuvre, the ‘Produnova’ on the vault horse, named after the Russian gymnast Yelena Produnova, who perfected the exercise.

It was in 1999 that a Russian woman gymnast managed to successfully complete a handspring double front vault, after which the vault came to be known as the Produnova vault. Russian gymnast Yelena Produnova was only 19-years old when she tried the very dangerous double somersault manoeuvre on the vault at the World University Games, also known as the Universiade; an event for university level athletes from across the world.

Karmakar last Sunday (August 7) literally sailed through the double somersault on the vault to land a berth in the vault finals in Rio, becoming the first Indian woman to have achieved that feat.

The Indian from the north-eastern state of Tripura is one of only a few women in the world who have been able to successfully complete the Produnova vault, because it is so difficult and dangerous. To perform the Produnova vault, a gymnast must run up to the vault and first do a handspring or literally toss herself into the air, using the vault as a jumping board. The gymnast must then do two somersaults in mid-air, after which she has to land on her feet.

Other than Produnova herself and now Karmakar, only two other female gymnasts have successfully performed this vault in competition: Yamilet Pena from the Dominican Republic and the Egyptian, Fadwa Mahmoud. The US star gymnast, Simone Biles, declined to do the ‘Produnova’ vault, saying she did not want to die!

The Produnova vault is considered to be one of the world's most difficult and dangerous athletics feats. The chances of someone landing on her head or neck are high. It exposes the athletes to life-threatening injuries.

Karmakar spoke to NDTV in an interview after qualifying for the finals, scheduled on Sunday (August 14).

"I will have tough competition in the final, as there will be top gymnasts from DPR Korea, USA, Russia and Uzbekistan. Some of them had even won gold at the 2008 and 2012 Olympics. The vaults final will see gymnasts like Uzebekistan's Oksana Chusovitina, who is competing in her seventh Olympics. Their experience is huge, so it will be tough," Dipa said in the interview to NDTV.

Her coach, Bisweswar Nandi, who is with her in Rio, said Karmakar qualifying was a big achievement.

Whatever the outcome on Sunday, Karmakar’s feat is historic as she has become the first Indian woman gymnast to qualify for Olympics. Performing the difficult and high risk Produnova vault; a double-front somersault which has the highest degree of difficulty for a women's vault; she has captured Indian and international attention.

"Every event in gymnastics is a risk, accidents may happen anytime but Dipa has mastered the Produnova and we're very hopeful," Nandi said.

Karmakar, who is flat-footed, follows a strict regimen with training sessions of four hours each in the morning and evening sessions. Her story of overcoming so many odds, including poverty and lack of infrastructure, to come this far is one of determined dedication. Her choice of the most difficult exercise on the vault will have many, many of her well-wishers holding their breath when she attempts the Produnova again.