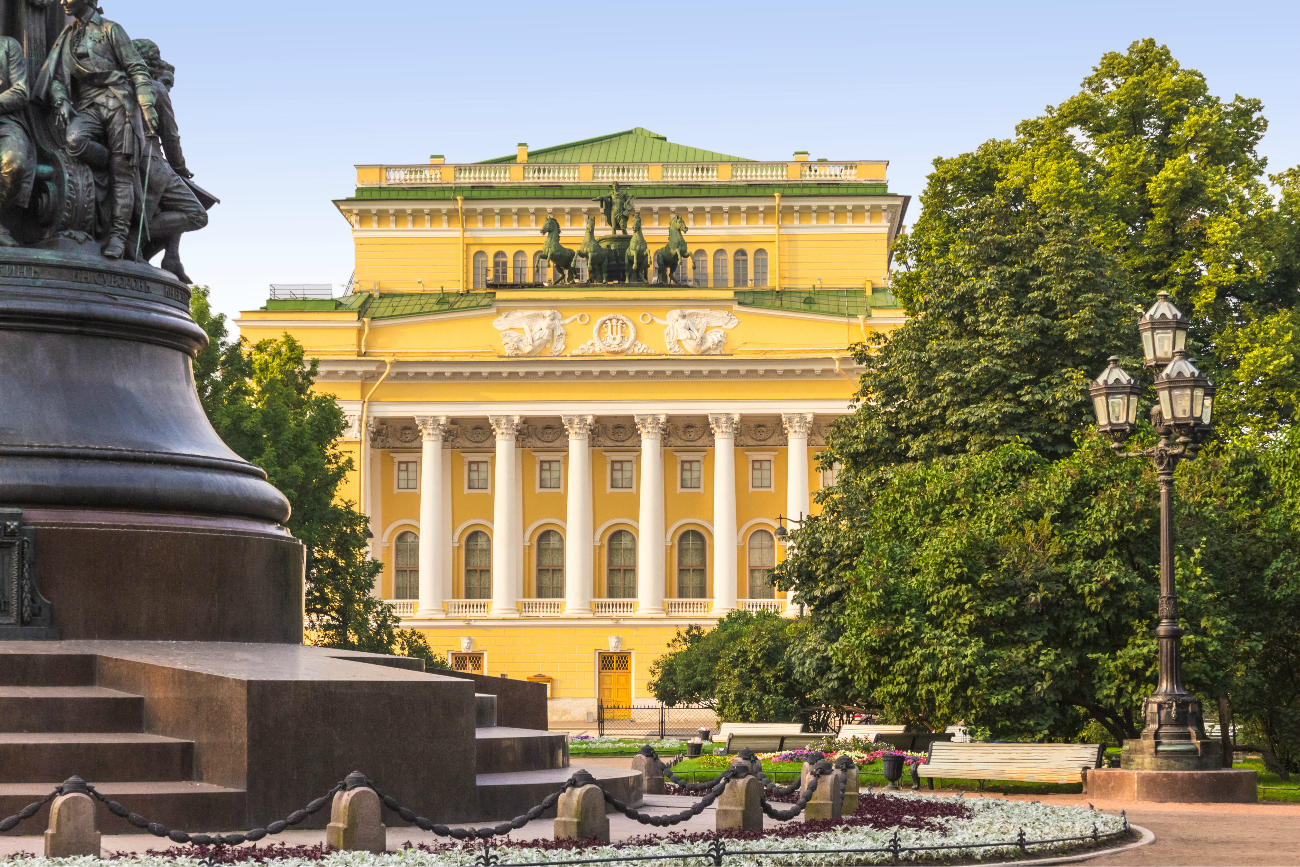 Press Photo
St. Petersburg’s storied Alexandrinsky Theater and its well-known artistic director Valery Fokin are celebrating a double anniversary in 2016. Fokin spoke to RBTH about the state of theater in the country, and how he is trying to forge closer cultural ties with Russia’s neighbors despite the political climate.

The Alexandrinsky Theater in St. Petersburg turns 260 this year, making it the oldest theater in Russia. Founded on Aug. 30, 1756 on the personal order of Empress Elizabeth, the first state-owned theater in the Empire would go on to become a model for most other Russian theaters, with a permanent professional troupe, a fixed repertoire and financial support provided by the state.

The theater has now been headed for over a decade by director Valery Fokin, who by happy coincidence also celebrated a significant birthday this year – he turned 70 on Feb. 28. It was Fokin who managed to transform the “Alexandrinka” from an archaic theatrical backwater into one of Russia’s most flourishing cultural venues.

‘Envied the world over’

“The model [of the fixed-repertoire state-funded theater] is a good one, and we should stick to it,” said Fokin. “We’re still envied the world over. Having said this, the state has been less helpful of late. In light of the financial crisis, our state funding went down by 30 percent this year, and we had to turn down a whole string of projects.

“Government bureaucrats don’t want to give money to modern art projects, but that’s where our future lies – in experimental theater,” he said.

Nonetheless, many large-scale projects are in the pipeline in honor of the Alexandrinsky’s double anniversary. One of these is a show named Masquerade: Memories of the Future, a contemporary revisiting of legendary Soviet director and theoretician Vsevolod Meyerhold’s well-known classic, which was first staged at the Alexandrinsky in 1917 on the eve of the Bolshevik Revolution and came to symbolize the epoch-forming changes of the time.

“When I began reading up about those years, I found there were a great number of similarities with our own times: war, an exhausted state budget, a political scene sharply divided into left and right, clashes with the church,” explained Fokin.

“I happened to read a note that the bishop of Tambov [a city 260 miles southeast of Moscow – RBTH] wrote about Meyerhold’s Salomé. The wording is exactly the same as in the ‘Tannhäuser’ affair [a 2014 production of Wagner’s opera in Novosibirsk that was canceled on the grounds that it “offended religious sensibilities” – RBTH].

“If you didn’t know that it was written in 1908, it would be completely impossible to tell the two apart,” said Fokin. “Everything seems to be repeating itself – there is a sort of apocalyptic mood in the air, a sense that we have reached some kind of limit, beyond which awaits only the unknown.”

Putin, Merkel and Obama on stage

The story sees aliens land on Earth and propose a program of general disarmament in order to save the planet, but they find little support for their peacekeeping mission.

“The world is ruled by ambition, so no one is prepared to be the first to back down. The leaders of the world’s great powers are unable to agree on how to disarm and would rather stay sitting on their powder kegs, ready to blow everything up at any moment. This is how man is made, and he doesn’t want to change,” said Fokin.

The director himself, aware of current tensions in international relations, is keen to promote cultural links with Russia’s neighbors.  The theater tours regularly, and in October of this year will be heading to Wrocław in Poland to perform Masquerade at the International Theater Olympics, which will be taking place in the city.

Fokin believes the trip to be of great importance, given the fact that Russia and Poland are not currently on the friendliest of terms: “We have lost the cultural link that has always joined us together. I believe that the ‘corridor’ of culture should always remain open, no matter what the political situation is like – otherwise, that’s it, it’s all over,” he said.

From France to Japan

The theater company seeks to set up this ‘corridor’ on every level possible, from tours and festivals to training programs for young people. A project to exchange knowledge and experience with the Theatrical Academy of Limoges is currently ongoing. Russian directors spent several weeks in France working with students from Limoges before presenting the results on the Alexandrinsky’s New Stage (completed in 2013).

French directors from the Conservatoire de Paris will now work with Russian artists, with the results of this collaboration to be shown in the fall.

Age of Enlightenment: The Alexandrinsky Theater glows in the dark

Other plans for the near future include cooperation with theater schools in Italy and Japan, as well as with the Klockriketeatern in Helsinki and the Backa theater in Gothenburg, Sweden.

The strengthening of international ties will continue in St. Petersburg at the traditional Alexandrinsky Theater Festival, where appearances will be made by Israel’s Habima theater, the Italian theater company Piccolo di Milano and the Japanese director Tadashi Suzuki with the première of his production of The Trojan Women.

“The Hungarians are currently behaving independently of the European Union and we are in close dialogue with them. Relations with the Poles, on the other hand, were once a lot more open,” said Fokin.

“We continue to work closely with Tadashi Suzuki, who is based in Toga in Japan – it’s a remarkable place, a whole village based around theater up in the mountains, where he lives and carries out all sorts of experiments. Next year we will be touring in Japan.”

Theater under threat from the state again?

Russian theater is not widely represented at many European festivals. At the Avignon Festival in France, for example, Russia is to be represented by Kirill Serebryannikov’s radical adaptation of Gogol’s Dead Souls for the second year running. Yet Fokin believes that this is entirely due to the tastes of festival organizers and has nothing to do with the international context or with any kind of backwardness in Russian theater.

“Theater in Russia is currently in rude health because there is a great deal of variety in it: We have talented young directors and experimental adaptations of plays as well as good quality shows of a more classical, academic style, including in the regions,” he said.

“The greatest risk that we face is the loss of this diversity. Those currently in power seem to want to systematize everything, to put everyone in the same box. There are many paths that theater can follow, not one main road that everyone has to march down in single file.”

It is interesting to note that something similar has already happened in the world of Russian theater. In the early 20th century, theatrical culture in Russia underwent a great blossoming with the avant-garde movement, but in the 1930s and 1940s the branch of Russian formal theatrical art represented by the likes of Alexander Tairov and Meyerhold was destroyed entirely.

“It is still a widely held opinion in some quarters that Russian theater is nothing but iron-cold tears and birch trees,” said Fokin. “In fact, the greatest breakthroughs in the field of theatrical form were made by us and continue to inspire many directors to this day.

“Just imagine the sensation that Meyerhold and Tairov caused when their productions reached Paris and Berlin! The most important thing is to learn the lessons of history, but we make the same mistakes time and time again. It must be our national characteristic.”

Secrets of the Bolshoi: The life and times of a Soviet claque>>>