5 things you probably didn’t know about the Bolshoi Theater 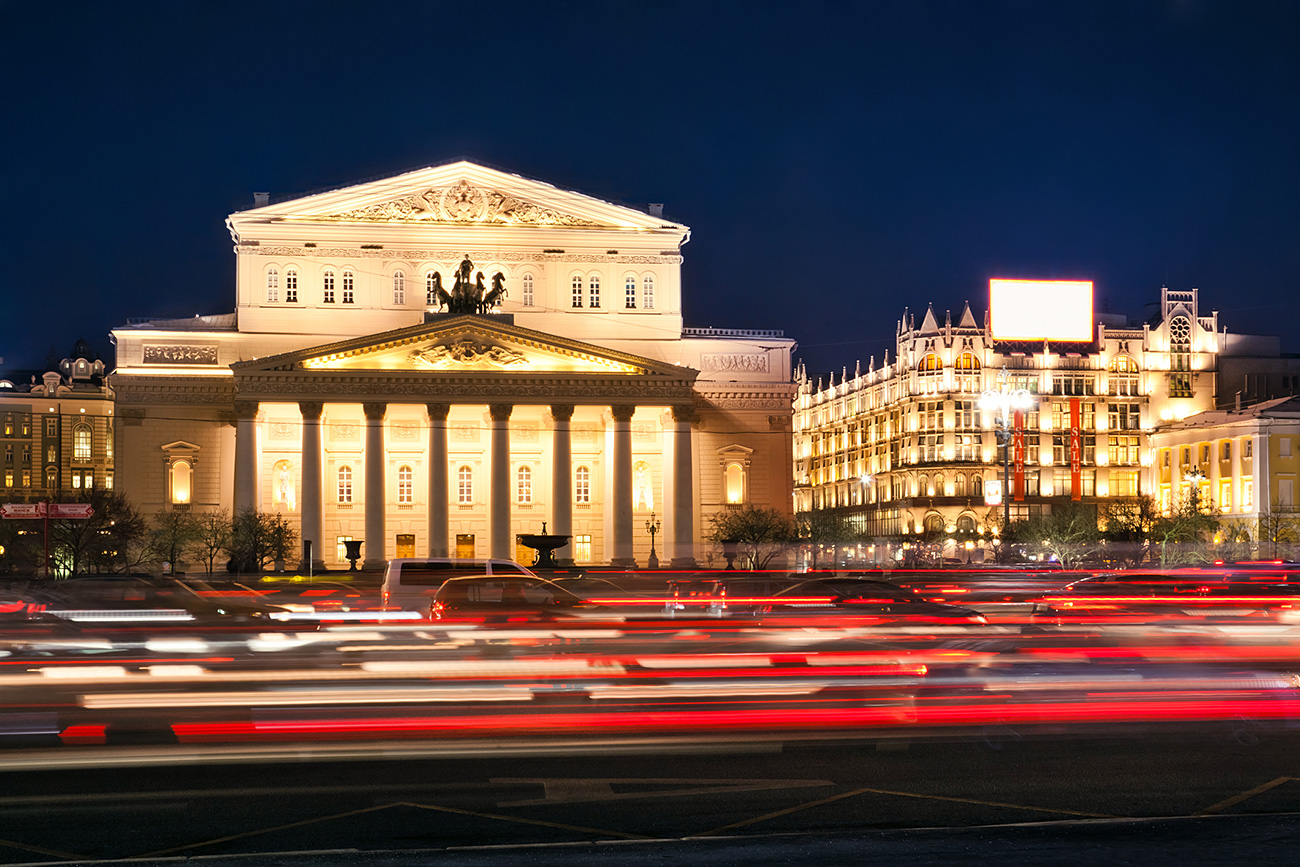 The Bolshoi Theatre is a historic theater in Moscow, designed by architect Joseph Bove, which holds performances of ballet and opera.

Getty Images
It’s easy to become so engrossed in a performance at the Bolshoi that fascinating details about the theater’s history and appearance can go unnoticed. Make sure to think of these five facts next time you visit.

1. The Quadriga of Apollo 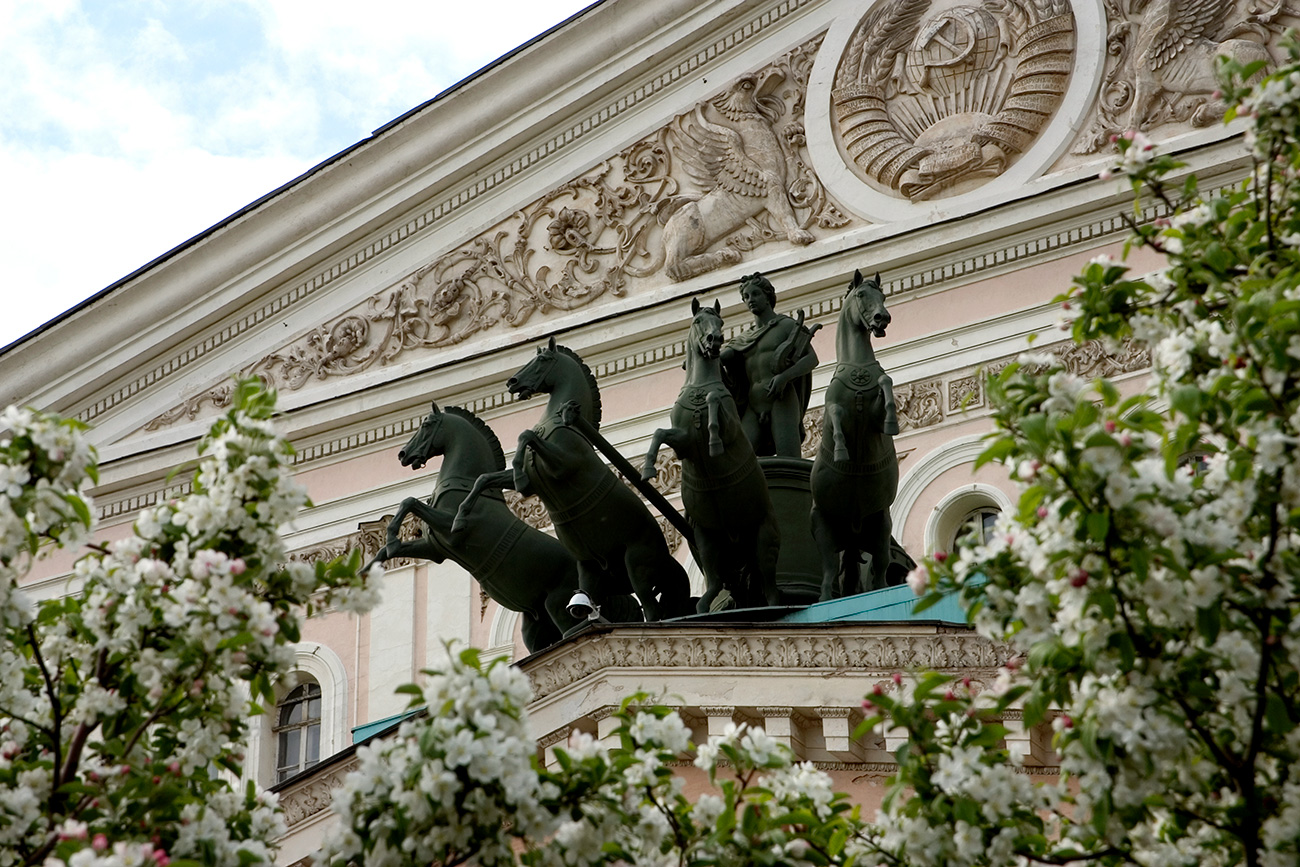 The Quadriga of Apollo has been a symbol of the Bolshoi - and Moscow - for a long time. It even holds court on the 100 ruble bank note. Despite the sculpture’s antique appearance, the four horses led by Apollo are not even 100 years old. Russian-Italian architect Alberto Cavos commissioned Pyotr Klodt (Peter Klodt von Jurgensburg) to create the quadriga in 1853, after a fire destroyed the original chariot adorning the theater’s facade, which was built by Osip (Joseph) Bove in 1825. Klodt also designed the famous flying horses on the Anichkov Bridge in St. Petersburg. 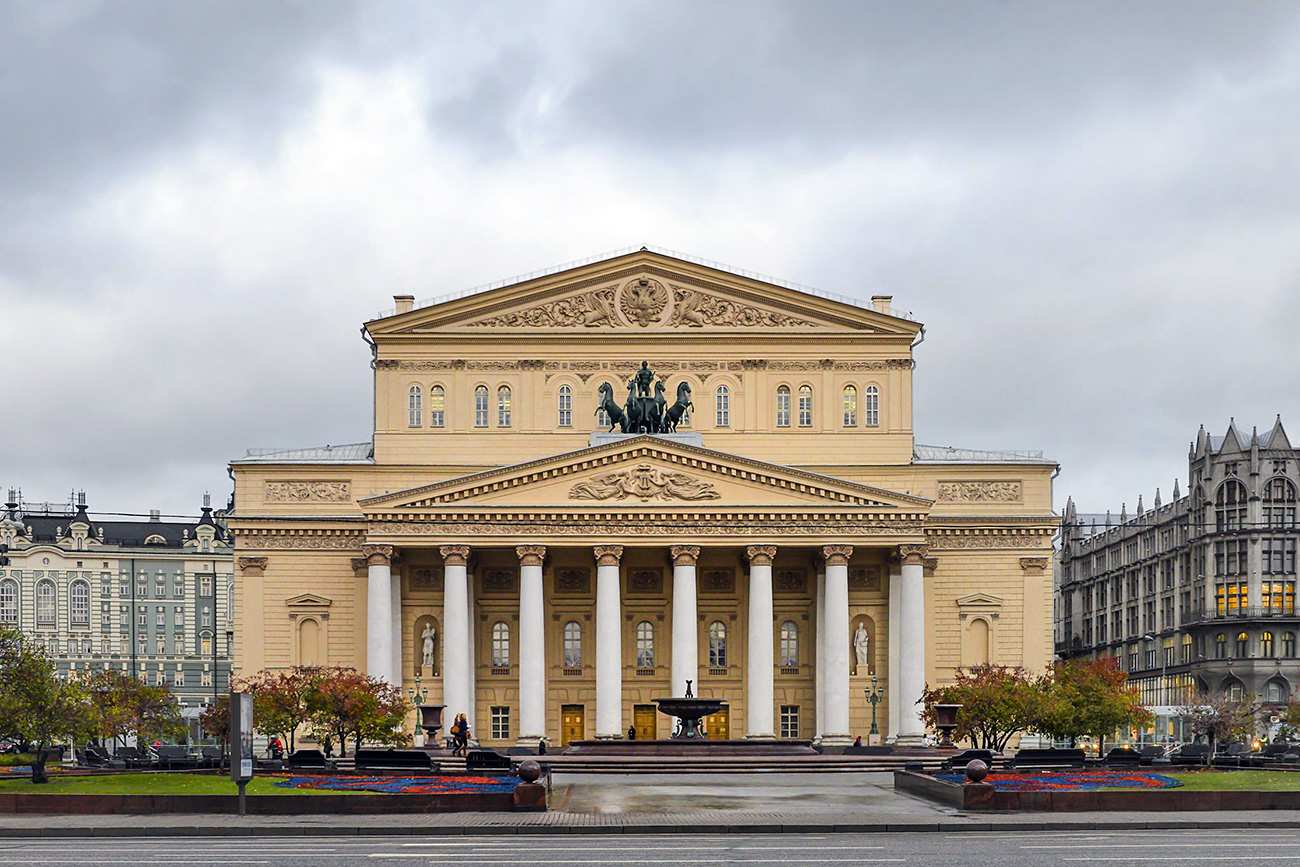 During World War II, the Bolshoi was hit by a bomb. The building survived and the quadriga was only damaged by shrapnel, a piece of which hit the head of Apollo. At the time only cosmetic repairs were carried out and the theater had to wait until recently to undergo a proper restoration. The original blueprints were studied and the building’s historical grandeur was restored - which meant the nude Apollo getting his fig leaf (and dignity) back! 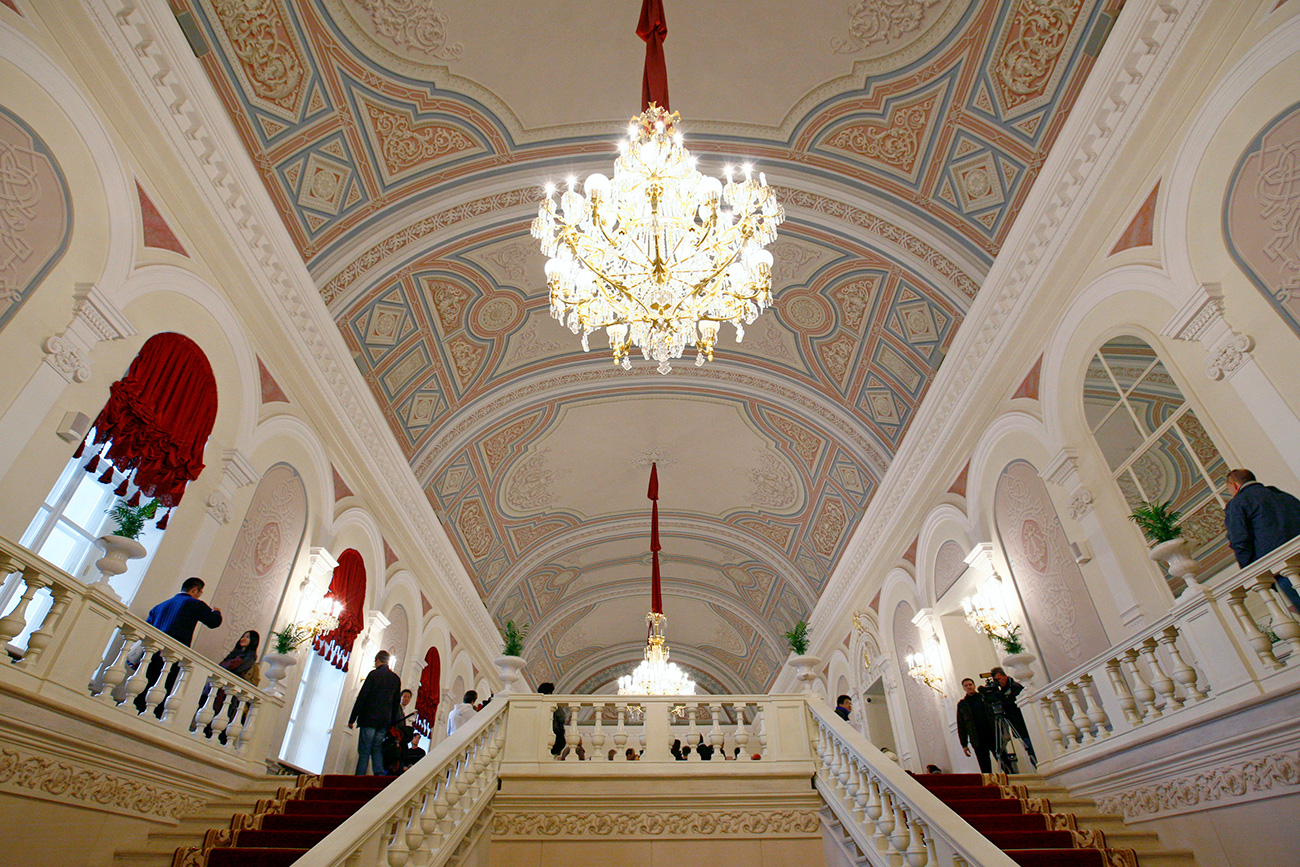 A general view of the foyer of Moscow's Bolshoi Theater. / Reuters

Magnificent ceilings painted en grisaille, walls decorated with red silk tapestries, gilded plasterwork, and 42 crystal chandeliers - the theater's Beethoven Room, complete with a bust of the composer, was only opened to the public in the late 1920s. 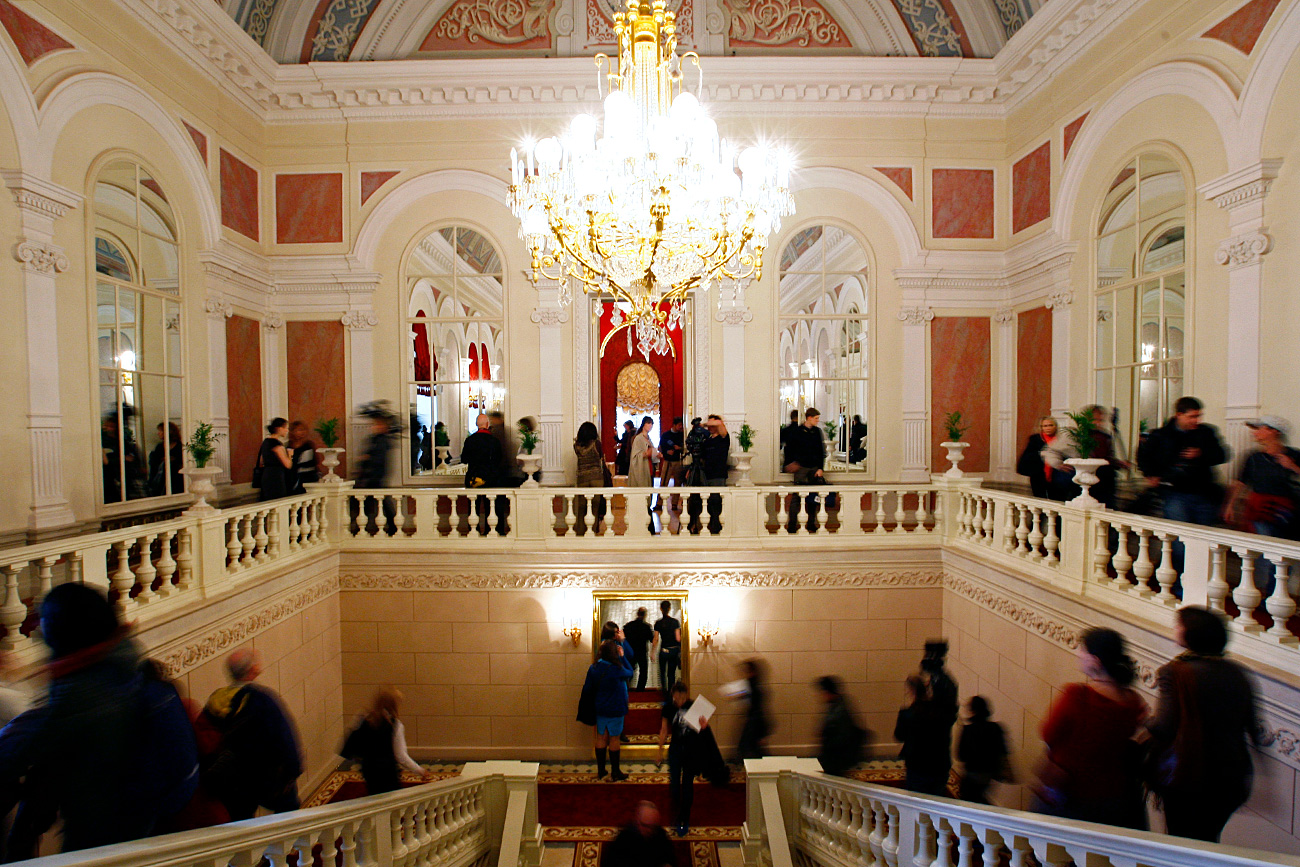 Visitors walk in the newly refurbished foyer of the Bolshoi Theater. / Reuters

Before the revolution it was part of the Imperial Theater where mere mortals were not allowed. The foyer's appearance adopted its final shape in 1895 when the theater was used to host the coronation festivities during Emperor Nicholas II’s ascension to the throne. 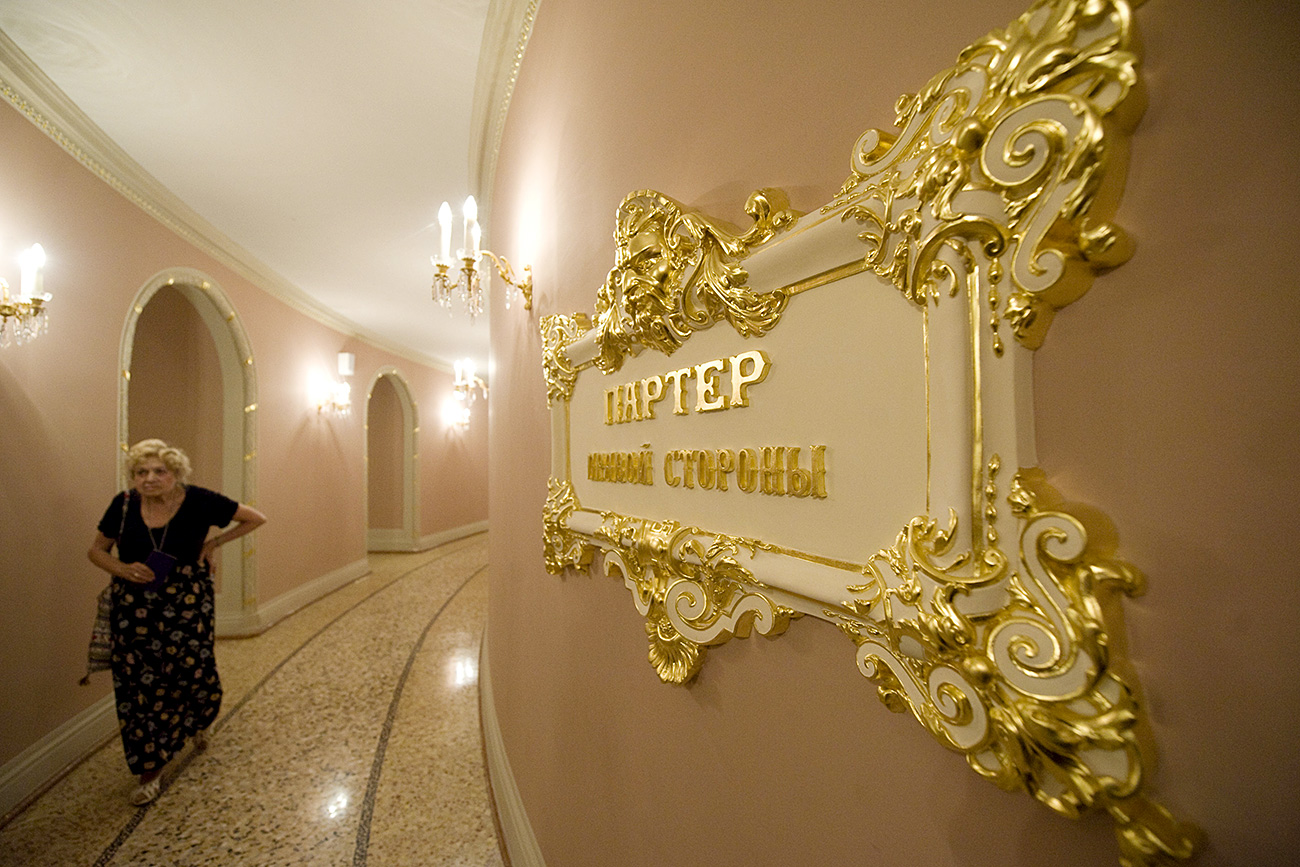 3. The chandelier of the main auditorium, the old stage 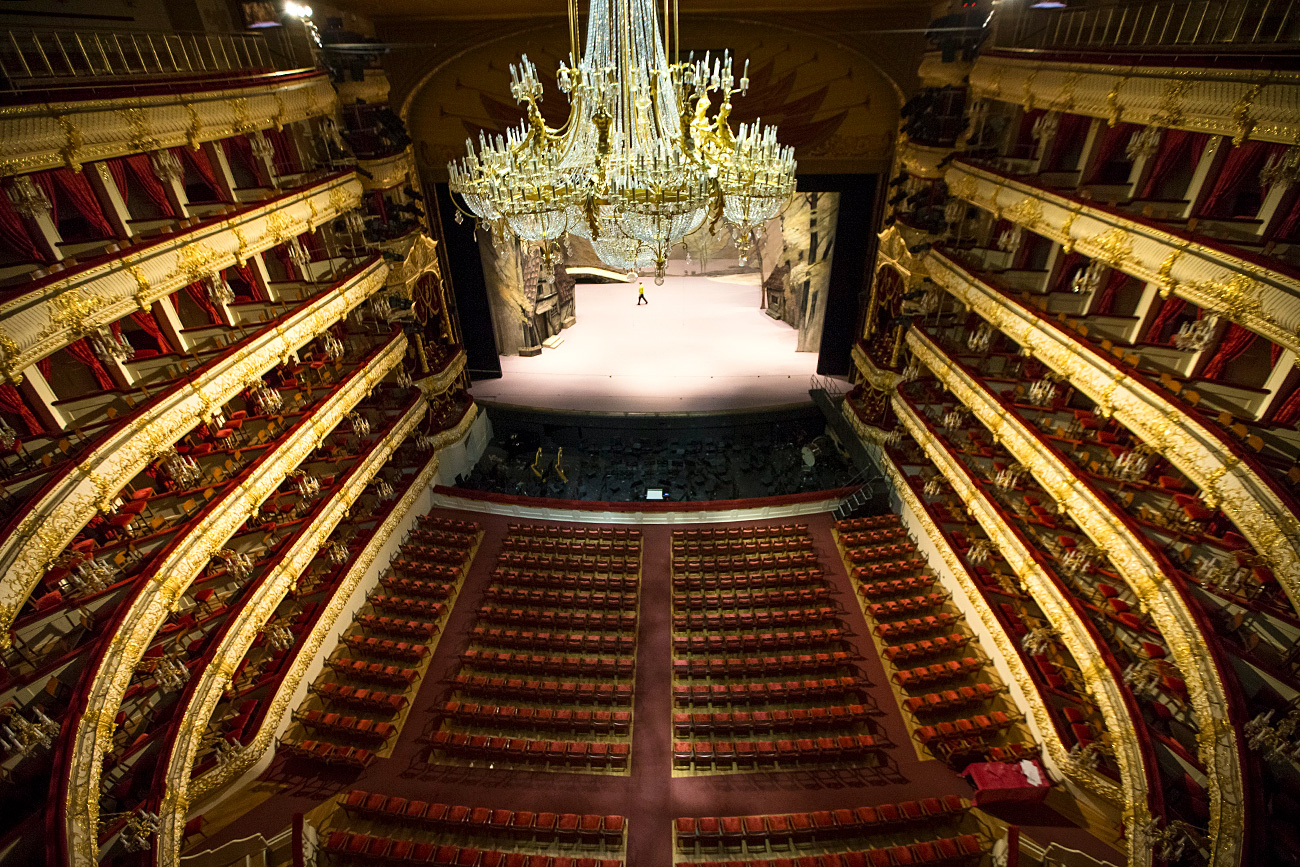 The main stage of the Bolshoi Theater. / AP

A gigantic gilded chandelier with crystal pendants has remained a symbol of the Bolshoi Theater since Soviet times. Many visitors come just to see the two-ton ethereal gem. It’s a whopping 65 meters in diameter and 8.5 meters tall. 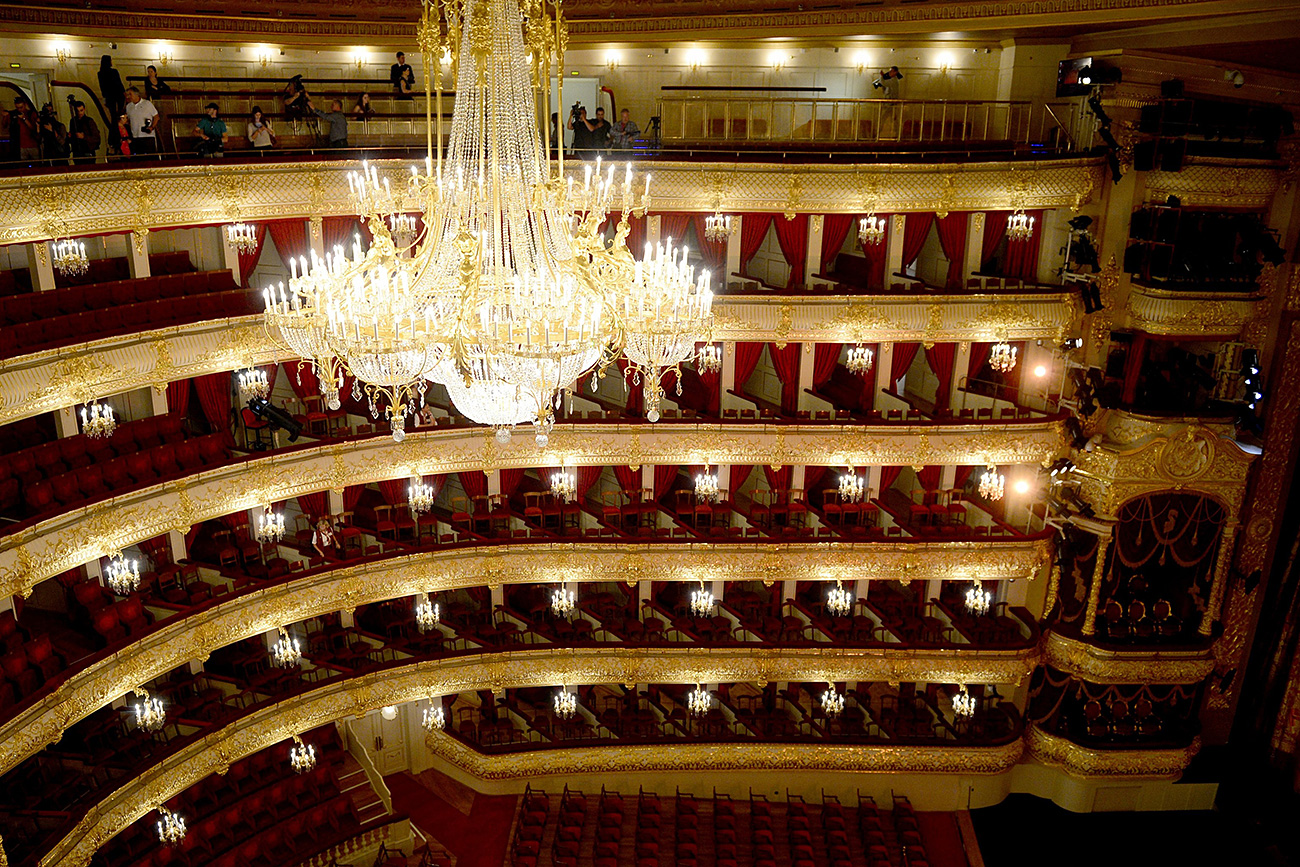 Created to celebrate the completion of Cavos’ Bolshoi design in 1856, the three-tiered chandelier was originally illuminated by 300 oil lamps, and each of the 24,000 pendants had to be cleaned by hand each year after the giant object was lowered into the auditorium. Luckily, the theater was connected to electricity in the 1890s, so less elbow grease is required these days. 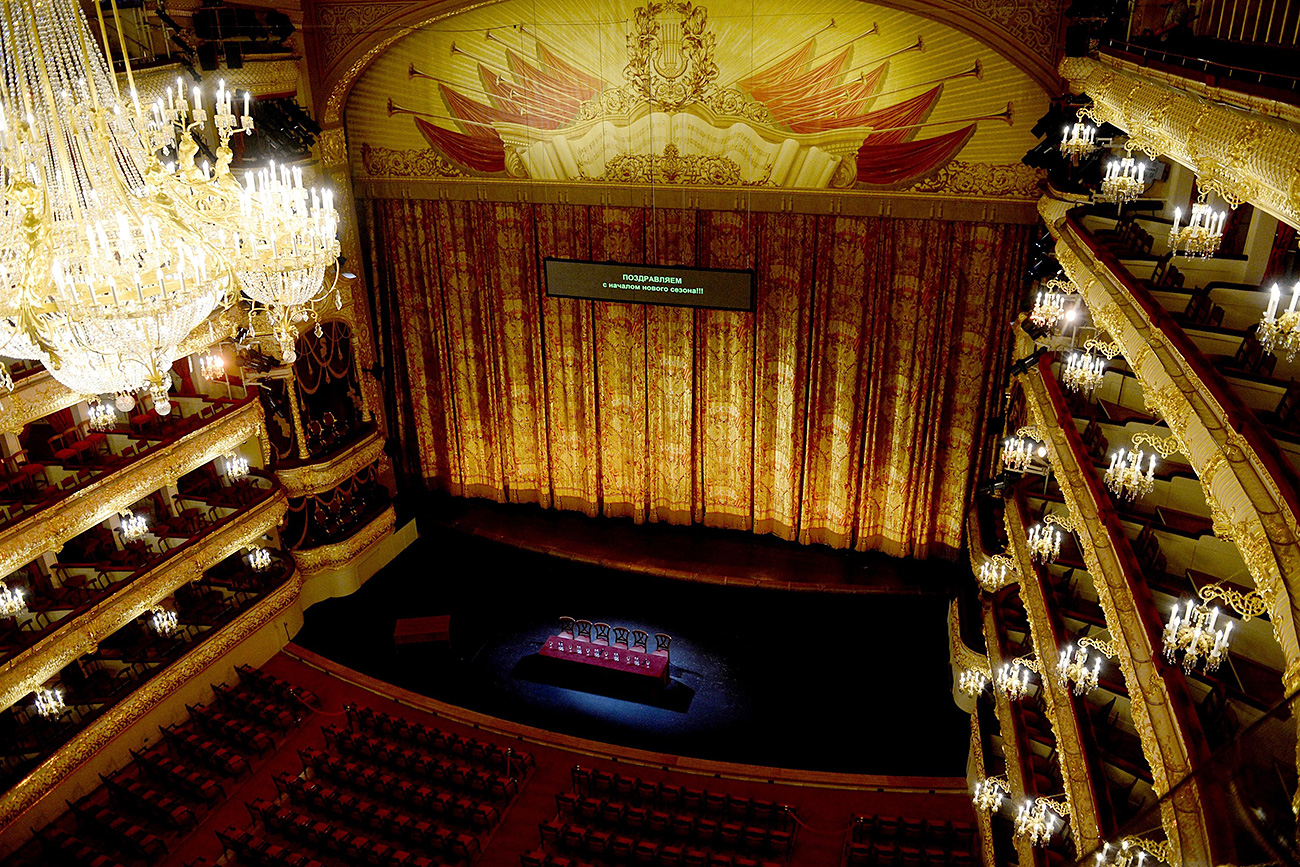 One can recall from television newsreels the legendary scarlet and gold curtain with Soviet emblems and "USSR" embroidered on it. However, it only appeared in the Bolshoi after the 1955 renovation. It was created by the theater's chief stage designer Fyodor Fedorovsky, who gained a reputation for implementing the “Stalin Empire” style. The canvas - made of natural silk with a metallic thread - was covered with a very thin layer of gold and measured 500 square meters, weighing more than a ton.

In the late 1990s, it was transferred to a museum and a new curtain, imitating Fedorovsky's style, was made with Russian symbols and the first notes of the "Glory to Our Tsar" chorus from Glinka's opera Ivan Susanin depicted on it. But it quickly deteriorated, so for the opening of the Bolshoi (after it was modernized in 2011) a new identical curtain made of modern acrylic - a tapestry imitating silk -  was commissioned from Italy. 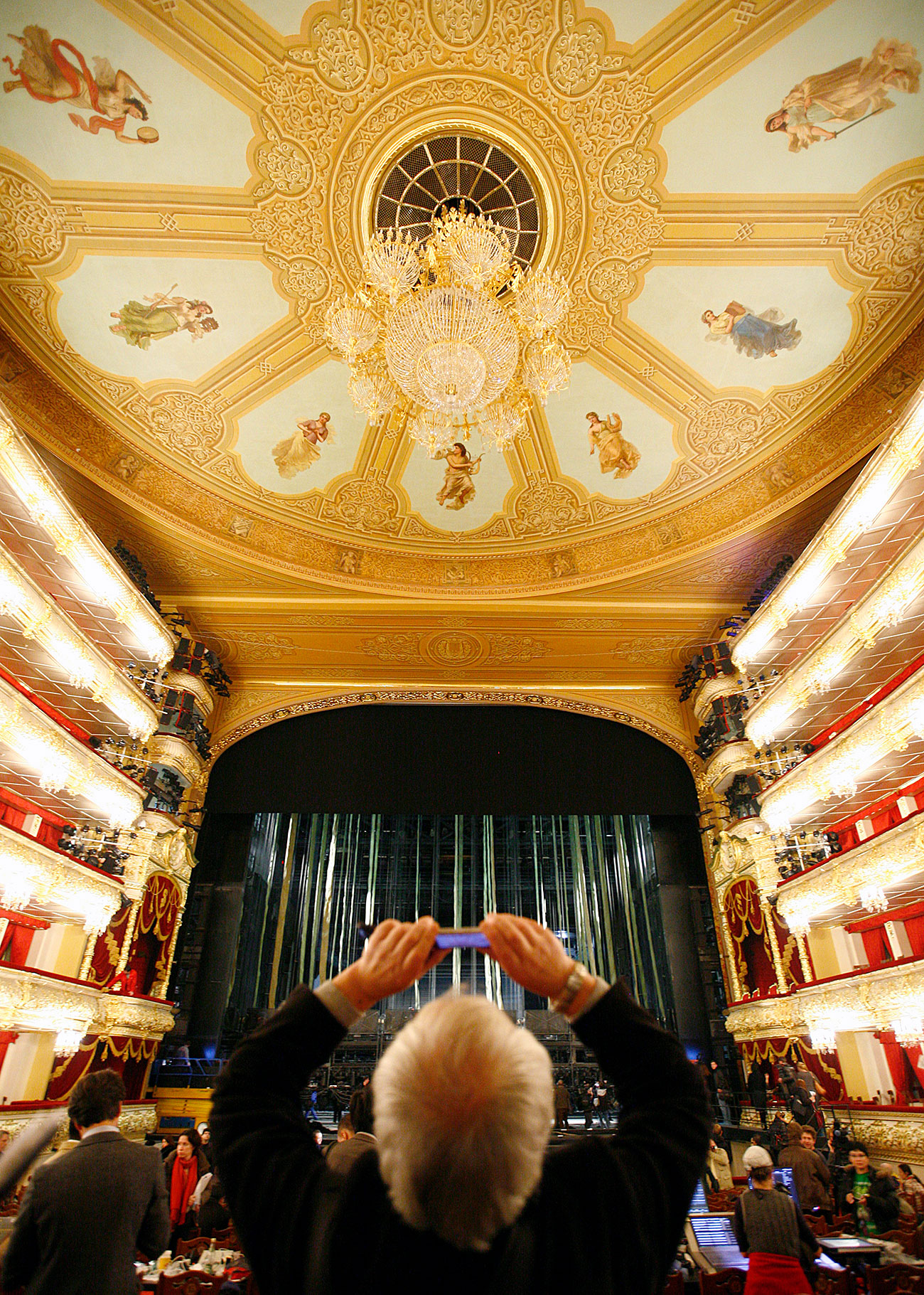 The architect Cavos, when creating the auditorium of the Bolshoi from scratch after the fire, employed old theater technologies as well as the latest ones available. In a bid to achieve pitch perfect acoustics, he followed the example of the old Italian masters to create an auditorium based on the principle of a musical instrument. In it, every detail, from the orchestra pit to the papier-mache adornments, was supposed to enhance sound. 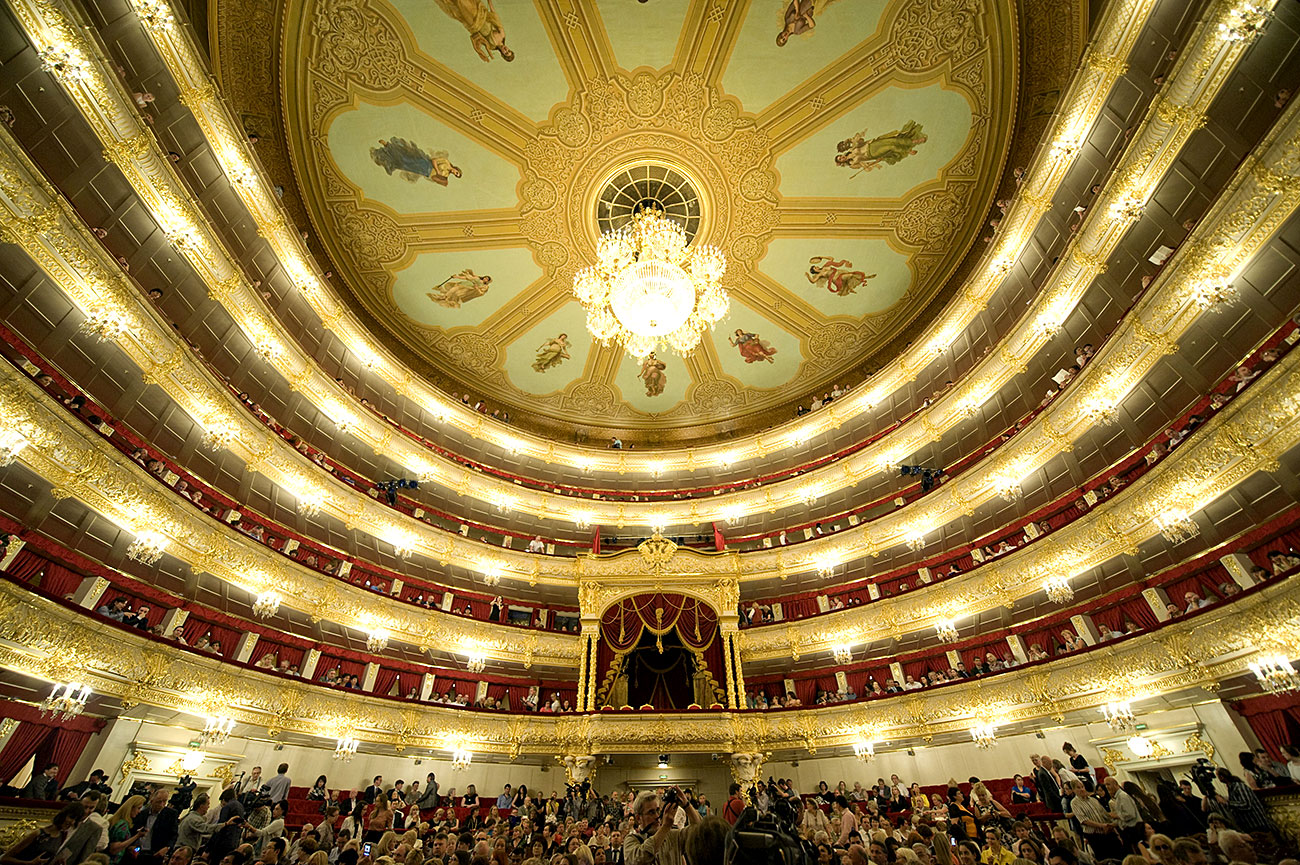 For the same purpose, a canvas was glued to the wooden surface of the ceiling. In the late 1850s artist Alexei Titov, entrusted with painting it, depicted a round dance by Apollo and his Nine Muses. The extravagant artist was unhappy that there was no patron Muse of painting - so he invented one. Titov added an unnamed Muse with a palette and brush in her hands.

Read more: 7 things to explore at Moscow's Red Square beyond the Mausoleum