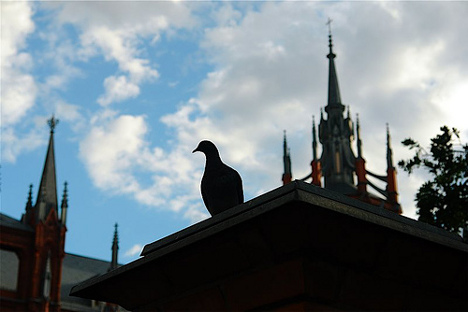 The Cathedral of Immaculate Conception of the Most Holy Virgin Mary. Source: inikitin.flicr

In Russian architecture the Gothic style is an uncharacteristic tendency. Yet you will find a number of Gothic buildings in Moscow.

In Russian architecture the Gothic style is an uncharacteristic tendency and a comparatively late one: the first Gothic buildings in Russia appeared only in the 18th century. Be that as it may, on the Moscow map you will find a number of buildings whose features clearly reveal aspects of the Gothic style.

This cathedral was built at the beginning of the 20th century. Westminster Abbey served as the prototype for the facade of this Gothic church. Work on the interior decorations and painting continued until 1917.

In 1938, when the Soviet campaign to liquidate religion was at its height, all of the church’s property was confiscated. The interior space was divided into four floors and used as a dormitory. Later, in 1956, the church was taken over by Mosspetspromproekt, a scientific research institute which made still more radical changes to the building.

In 1990, this cathedral held its first religious service in 60 years, right on the cathedral steps.

This cathedral is now open to all visitors. Do not to confine yourself to looking at the outside only, but spend some time inside as well, during a service. These services are conducted in a number of languages, including English, French, Spanish, Korean and Vietnamese. Moreover, the cathedral hosts well over 100 concerts every year, featuring church and classical music. Tickets to any concert may be reserved over the Internetor bought an hour beforehand at the church.

The mansion of Savva Morozov

Legends abound about the luxurious life of Savva Morozov, one of the most celebrated patrons of the arts from this family of rich industrialists. His mansion on Spiridonovka — a mansion in the style of a Gothic castle — played a large part in spreading his renown.

Morozov, who studied chemistry as an undergraduate at Cambridge University, was enchanted by English Gothic. In Fyodor Shekhtel, a young architect passionately enamored of the romance of the Middle Ages, Morozov found a partner. Morozov commissioned Shekhtel to design a mansion for his young wife, Zinaida.

Construction continued until 1898. Unlike any other building in Moscow, it immediately became one of the city’s principal sights, bringing the Russian capital architectural fame and professional success.

Later, after her husband’s suicide, Morozov’s wife Zinaida, having suffered greatly during the Revolution of 1905, sold the mansion.

Morozov’s mansion has gone down in history not only as an architectural gem but also as a structure of literary importance. In that famous episode when the heroine turns into a witch in the novel “The Master and Margarita,” she flies out of a second-story window — out of Morozov’s mansion. This is what Mikhail Bulgakov was describing, or so readers say.

Today, the Morozov mansion is used only for formal receptions by the Ministry of Foreign Affairs. Unfortunately, it is not open to casual visitors. Once upon a time, the mansion was open once a year, on the Day of Museums. Now, however, it is entirely closed to the public.

The Evangelical Lutheran Church of Saint Peter and Paul

Another gem in “Gothic Moscow”is theEvangelical Lutheran Church of St. Peter and Paul in Starosadsky Lane — one of two working Lutheran churches in Moscow and one of the oldest Lutheran parishes in Russia. Construction of the church began in 1817; it was financed by King Friedrich Wilhelm III of Prussia and by Russian Emperor Alexander I.

In the course of the

19th century, the building was remodeled several times: the church was made larger to accommodate increasing numbers of parishioners. Church services were stopped in 1936, and, three years later, the church had become a cinema. The interior was entirely destroyed and the church spire removed.

A new chapter in the history of this church, like so many others, was opened in 1991. Major restoration work on the exterior began then, continuing until 2010. Work on the interior continues to this day. Concerts of organ music that are held in the church are held periodically, with breaks in between for construction purposes. Tickets cost the equivalent of $20-40.

You can combine your architectural walking tour of Gothic sights with a shopping expedition to TsUM, one of Moscow’s most celebrated department stores.

The seven-story building on the corner of Petrovka Street and Theatre Square was built in 1908 by the Scottish merchants Andrew Muir and Archibald Merrilees, for their store Muir and Merrilees. The use of Gothic forms was partially for advertising purposes: this huge department store not only stood out among the surrounding buildings of classical design, but it also stuck in the minds of visitors.

In its entire history, TsUM has never changed its purpose: it has always been a department store, even during World War II. Today, TsUM is one of the most fashionable places in the capital. Here, more than 1,000 brands of fashionable clothes, perfumes and jewelry are on display.

The first Anglican parish in the capital was built in 1827. On that site in 1884, the British architect Richard Knill Freeman built a one-nave church of red brick, which is located to this day on Voznesensky Lane. At the insistence of the Scots — then the richest and most respected members of the British community in Moscow — the new church was consecrated in honor of the holy apostle Andrew, the patron saint of Scotland.

During the October Revolution, the Bolsheviks, in an effort to stop the progress of Provisional Government troops through Moscow, set up a machine gun in the church tower. After the revolution, this church shared the fate of all religious sites: it was used alternately as a warehouse and a dormitory. In 1960, the church was taken over by the Melodia record company and used as a sound studio. The church returned to its original use only in 1991.

Services at St. Andrew’s are conducted only in English. Every Thursday and Sunday, charity concerts of organ music are held; these are open to the public. Although the organ for which the church was renowned before the revolution did not survive the Soviet period, the superb acoustics remain. These are greatly valued by the soloists from the Philharmonic and the Bolshoi Theatre, who sing here for parishioners and guests to the accompaniment of the electric organ.