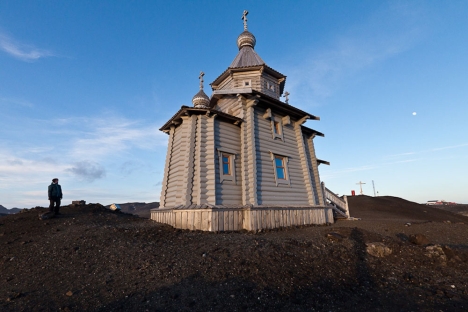 Bellingshausen Station is a location of Trinity Church, the only permanently staffed Eastern Orthodox church in Antarctica. Source: Dmitry Malov

In the southernmost continent on Earth, people get married, run marathons…and bless penguins.

With the current level of the world’s oceans, if Antarctica didn’t have its ice cover it would  be an archipelago like the islands of French Polynesia: a few volcanic peaks rising above the water, underwater rocks and wide straits.

King George Island (or Waterloo Island) would certainly form part of this Antarctic Archipelago, albeit on a much reduced scale. Most of it consists of ice with some small “oases”: hills of volcanic rock. This is the closest point in Antarctica to the real continents, and also the most multinational island in this entire latitude: the population consists of research station staff from Argentina, Brazil, Poland, Russia, China, Uruguay, Peru, Chile and South Korea.

For countries that have territorial claims to this continent, scientific stations are a way of marking their territory.

For others, they are an opportunity to join the Antarctic Treaty and become an Antarctic power. In comparison with the unpopulated wastes of the Arctic, King George Island is a real megalopolis: the Frei base and the Chilean polar village are separated from the Russian Bellingshausen station by a stream, and you can reach the appropriately named “Great Wall” Chinese base in less than an hour by snowmobile.

The other stations are situated not more than six miles from each other.

Scientists from Russia can go spend the winter in the Antarctic through the Arctic and Antarctic Research Institute. Most are doing research in Antarctic biology or glaciology. Glaciologists often come here in an attempt to find out whether the Antarctic ice cap is melting or, conversely, whether it’s getting bigger. When scientists first came to the Russian station in 1968, 11 people stayed here for the winter.

Now 23 people spend the winter at the base each year: because of the mild climate conditions (-6.8 degrees is the average temperature in the coldest month, August, and -1.1 is the temperature in a warm February), the Russian polar scientists call it a “resort.”

For tourists who like extremes, King George Island is a real paradise: charter ships are frequent visitors, full of people dreaming of seeing penguins and catching fish next to whales and seals. One of the three stationary hotels on Antarctica belongs to the Bellingshausen research station.

“It’s a simple set-up: two beds, linoleum on the floor, a table and chair, walls lined with wood… But if you’ve decided to go to the South Pole, you don’t need any more than that – just the essentials,” reads the blog of one Antarctic tourist.

When foreign airlines bring Antarctic tourists to King George Island, the travelers stay at Bellinshausen by arrangement with the Russian polar scientists.

The scientists are happy to put up with the travelers – if only because they bring fresh vegetables. “The food supplies are mainly tinned food, but we’re not complaining – after all, we do have electricity. We have diesel generators which take 11 or 12 cubic metres of diesel fuel per month,” said Ruslan, the research station’s mechanic, photographer, and administrator of the polar researchers’ blog on Livejournal.

In addition to the tourists, the island’s scientists are entertained by participants in the annual Antarctic Marathon. The first of these races was held in 1995 and in 2012, 145 people took part in the marathon – 26.2 miles of uneven, hilly ground. The weather conditions during the marathon, as on any Antarctic expeditions, are unpredictable.

The Antarctic is like a pie, “cut” by meridians into thin slices. People at the South Pole live on New Zealand time, since this is where the flights to the Amundsen-Scott base at the pole start from. But the time at the stations, which are located a few miles from each other, can vary by several hours. Ships arriving in the Antarctic change their clocks several times as they cross time zones. How to get there: The airfield is not far from the Chilean civilian settlement of Villa Las Estrellas. It receives hundreds of flights a year (ICAO, SCRM), operated from Punta Arenas by the private airline Aerovias DAP, and anyone who wishes to can buy tickets for the plane. This is not a civil flight but a charter: together with their ticket, tourists get an excursion and an Antarctic guide. You don’t need to turn up to check in, you just need to attend a briefing the previous evening.

Several years ago the athletes ran the race in hundreds of laps around the deck of their ship. It couldn’t dock at the island because of a storm.

The Antarctic’s first Orthodox church – the Church of the Holy Trinity – was built at the Russian base.

The church was built of logs in the Altai Region, then dismantled and transported in trucks to Kaliningrad, and from there on the ship Academic Sergei Vavilov to the Antarctic, where a team of eight people assembled it in 60 days. Beginning with its construction in 2004, the priests in the church have been replaced each year, on the same schedule as the research station staff. Some of them have been here more than once: Father Kallistrat spent two tours at the station.

“At Epiphany we blessed the water in the lake and then sprinkled the whole station with holy water, and Father Protoleon even sprinkled the penguins,” said Father Kallistrat.

However, the church now has a permanent priest, Father Grigory, who has 20 years’ service in the polar regions.

Father Grigory lives permanently not far from the church. The stream which divides the Chilean and Russian stations is known as the “Jordan.” It flows from the freshwater Lake Kitezh into the Atlantic Ocean. This is where the water for Epiphany comes from. The first wedding in the Antarctic took place in this church in 2007: Angelina Zhuldybina, daughter of a Russian polar researcher, married Chilean Eduardo Aliaga Ilabaca, who works at the Chilean Antarctic base.

The Antarctic has a special status: it doesn’t belong to anyone. There are no authorities here, no borders, and no fences. Here visitors can catch mackerel icefish, natoten fish and goby fish. They can look at whales, penguins and seals, which are quite unafraid of humans. In the summer, in temperatures of -1 degree, people swim in the sea and sunbathe in the light reflected from the ice.

Legend has it that this is where Atlantis, the cradle of human civilization, sank and was buried beneath the ice. Now on its shores you can meet people of various nationalities, coexisting peacefully in the space of this little Earth, where Chile and Russia find themselves neighbors and a trip to China only takes 40 minutes by snowmobile.