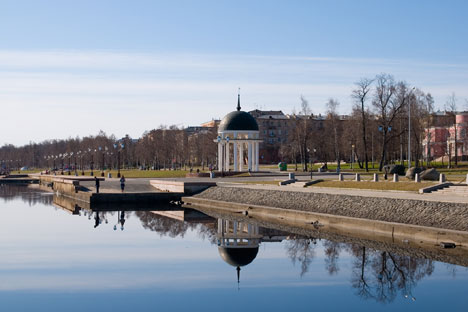 The landscape of this region in North-western Russia is an iconic mix of wide lakes and wild forests, wooden churches and heroic monuments

A weekend is just long enough to visit the beautiful island of Kizhi, sample some local cuisine, walk by Europe’s second largest lake and enjoy this distinctive Russian city.

Peter the Great first built a weapons’ factory at Petrozavodsk in 1703 to help his war against Sweden and the city’s name means “Peters’ Factory”. With two universities, the town has a youthful feel, while the nearby border with Finland gives it a European emphasis.

Head straight for the Onezhskaya Embankment for a late afternoon stroll along the shore of Europe's second-largest lake. Lake Onega, with its hundreds of islands and ancient rock-carvings, inspired the poet Alexander Pushkin to call the hero of his verse novel "Eugene Onegin". On Ulitsa Pushkinskaya, a monument to Pushkin, looking nonchalant in a frock coat with his arms crossed, is just one of many sculptures near the lakeside.

Petrozavodsk’s twin towns and sister cities donated several of these decorative monuments. The striking “Fishermen”, on a rock above the water with their fine metal nets flying in the wind, was a 1991 present from Duluth, Minnesota, also a waterside town.

Norway’s Mo i Rana, on a fjord near the arctic, contributed a group of stylised figures called “Meeting Place”; Sweden’s Umea sent a “Tree of Wishes” and neighbouring Finland an angular “Wave of Friendship”. The oldest sculpture is a classic bronze monument to the city’s founder, Peter the Great, pointing imperially from the windswept end of the embankment since 1873.

Having got a bit of fresh air and culture, head for the Karelskaya Gornica, ten minutes away in the town centre, to try some Karelian specialities. The restaurant is unashamedly touristy, decorated like a traditional, wooden Karelian house with waiting staff in costumes and as many peasant artefacts as a museum of local history, but don’t let it put you off: the food is tasty and the atmosphere is cosy.

You can kick off in style with a vodka-cranberry cocktail, before trying a bowl of pickled woodland mushrooms or salted cod with cucumbers. Karelia is famous for its rivers and lakes so it is no surprise to find several dishes based on freshwater fish, like local versions of ukha (fish soup) made from trout or salmon, or baked pikeperch with creamy mashed potatoes. You can even find elk stew, venison or bear meat on the menu, together with less exotic offerings such as buckwheat, turnips and radishes. For pudding, there are tarts, pies and sorbets incorporating blueberries, cranberries or the vitamin C-rich cloudberries.

A feast at Karelskaya Gornica won’t be particularly cheap; a three-course meal might set you back around 2,000 rubles ($65), but anyone who is used to Moscow prices won’t be too shocked. It’s open 11am to 11pm.

Choose one of the bars or cafes along nearby Prospekt Lenina for an evening drink, cakes or coffee. The studenty Kaffee House at number 23 and the associated Neubrandenburg Bar can cater to most tastes. Luckily the German theme and Oktoberfest-style waitresses don’t mean they only serve overpriced, foreign drinks.

You can get a decent Russian beer from about 70 rubles here and enjoy watching the world go by. You could try one of the flavoured pipes that add to the already-densely-smoky atmosphere or sample the strong Karelian balsam, a liqueur made with 20 different herbs. Or you could opt for a cup of coffee and cheesecake at the popular, new Déjà vu Bistro a few doors down.

10am: Icons, seascapes and national epics

The Karelian Museum of Fine Arts is on Prospekt Karla Marksa, with some handy breakfast cafes and canteens nearby. There is a good collection of icons, from the 15th century onwards, and colourful examples of local embroidery or painted distaffs. More excitingly, the museum has examples of work by Russia’s finest 19th century painters, from Isaac Levitan’s moody fields to Ivan Aivazovsky’s luminous seascapes.

Soviet art is well represented, especially the painters of the “Leningrad School”, with their evocative interiors and street scenes. It’s also worth taking a look at the art inspired by the Karelo-Finnish epic poem “Kalevala”, a creation myth with elements of magic and romance as well as kidnapping and seduction.

When you need a break, try the Café Parisienne, not far away at 22 Prospekt Marksa; here you can relax in leather armchairs and sample anything from pizza and pasta to steak in berry sauce.

If you want to know more about the Kalevala, visit the Karelian National Museum on Ploshchad Lenina, which has a whole hall dedicated to the epic poem, including manuscripts and musical instruments. There are also displays about the area's nature and history, with traditional wooden skis, prehistoric bowls or relics of Peter the Great’s military campaigns.

You could also pop into the Alexander Nevsky Cathedral. Nevsky, a medieval prince and now Orthodox saint, is shown in several of the gleaming new icons inside. The neoclassical building dates from the 1820s and originally served the nearby factory.

Alternatively, if it’s a sunny day, you might want to take a taxi out to a wood or waterfall, or simply sunbathe on the grassy shores of the city pond near Ploschad Kirova.

Karelia’s National Theatre, also on Ploschad Kirova, is a great place to spend a couple of hours. The architecture and décor are a wacky combination of classical, Soviet and baroque, with chandeliers and painted ceilings. The tickets are cheap and the shows range from musical extravaganzas and rock-opera to serious, Scandanavian dramas, taking in romantic comedies, grown-up fairy tales or Shakespearean tragedy.

If you still have energy to spare when the show finishes, check out some Karelian nightlife at Petrozavodsk’s latest club, Das Kapital, on adjacent Prospekt Karla Marksa. All-night music, two dance floors, live performers like local poet and musician Dolphin with his 1990s-style alternative rock and rap, legendary DJs, alcoholic ice cream and wicked cocktails make Das Kapital a magnet for the tireless young (or young at heart).

Don’t miss a trip to breathtaking, UNESCO-listed Kizhi Island. The hydrofoil from the Petrozavodsk Ferry Port takes an hour and 15 minutes each way, costs around 2500 rubles return, and leaves, if there are enough people, at 8.45am (or 11am) from May to September.

The most familiar landmark is the 22-domed Church of the Transfiguration with its gables silhouetted above Kizhi’s grassy shore, but there are numerous other buildings to see too. The State Open-Air Museum of Wooden Architecture at Kizhi, begun in 1951, is a 6km-long collection of churches and cottages, windmills, watermills, smithies, barns, bell towers and banyas in a beautiful natural setting. Tickets for the museum are 625 rubles ($20) for foreigners.

There have been churches on Kizhi for centuries, built using logs of scots pine, roofed with spruce wood planks and topped with a waterfall of aspen-covered domes. Traditional building methods involve no nails at all, but simply close-fitting notched logs. Legend also tells that the builder of the Transfiguration Church threw his axe into the lake when he had finished "there was not and will be never be another church to match it."

There are a few cafes near the pier where you can pick up blini (pancakes) or a cup of coffee. In summer bring a picnic lunch to eat among the meadow flowers by the water’s edge. You can even get to Kizhi in winter by helicopter (8142747566) or several tour companies run hovercraft or snowmobile safaris to Kizhi across the frozen lake, including the local Intourist office.

Back in Petrozavodsk, there is just time for some souvenir hunting. Shops like the Khudozhestvenny Salon at 41 Ulitsa Gertsena sell traditional Karelian crafts. Choose birch bark pictures, ceramics, knitwear, gold-work embroidery, dolls or toys. Or simply take a final stroll through the park by the Onega and a last drink in the Fregat bar at the end of Prospekt Marksa, overlooking the oceanic lake.

Transport: Petrozavodsk is accessible from Finland as well as other parts of Russia. Goldline buses run regular services across the border and Rusline flies in an hour from Helsinki for around 9,000 rubles ($295).

Rusline also runs domestic flights to Petrozavodsk Airport (12km out of town) from Moscow's Domodedovo. A return ticket from Moscow costs about 8,000 rubles ($262) and the flight takes 90 minutes each way.

Hotels: Bargain hunters could check out Hostel Kizhi, which offers dormitory beds for as little as 340 rubles ($11) and twin rooms from 2,000 ($65). It even has free wifi, a sauna and indoor pool, but it is a short bus ride out of the town centre.

We stayed in the central Hotel Severnaya (21 Prospekt Lenina; +7 8142-59-97-77) where you could get a family room for around 5,000 rubles. The Soviet era building has a distinctly dated feel, but it is handy and clean.

At the top of the range, the new four-star Onego Palace is right by the lake with great views across the water. It boasts a fancy restaurant, sauna, gym and spa. Prices start from 4,250 rubles ($140) for a single room and go all the way up to around 20,000 ($655) for a double suite.