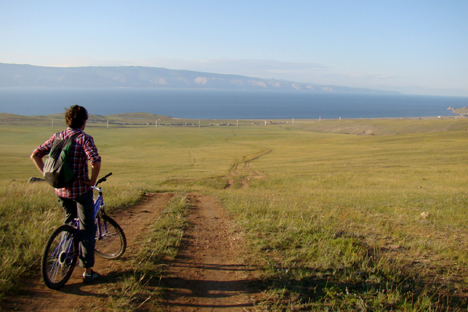 Breath-taking natural scenery and the richness of traditional Buryat culture make the largest island on Baikal, one of the most unique natural destinations in Russia.

Olkhon is the largest island in Lake Baikal and the only inhabited one. The name is rather appropriate as it means "dry" in Buryat. There is not a single river or stream on the island, which is bound by one fifth of the world’s fresh water resources.

To reach Olkhon you need to take a plane or a train to Irkutsk, where you can take a shared taxi or a bus to the island. The ride takes about 5 hours.

Jokingly dubbed “the capital” by the locals, Khuzhir is the largest location in Olkhon, with a population of 1,200.

It boasts a few grocery stores, a couple of restaurants, a church and even a night club. Yet, despite all these traces of civilization, life is peaceful and uneventful on the island.

In 2005, Khuzhir was finally wired for electricity. Since then, tourists have been flocking to the town, giving locals a chance to make some extra money by renting out rooms and bicycles.

The streets of Khuzhir are now as often filled with Russian as they are with French, German and English.

Church key-keeper, Sergei Yeremeyev, runs the Filoxenia hostel. One of the French girls staying there rode bicycles with her boyfriend from Paris to Moscow and then headed for Baikal.

Accommodation here is free and you can stay as long as you want, but Sergei and his wife welcome any help their guests can give. Some water the vegetables in the garden, clean, or insulate the hostel in preparation for the coming winter.

In the evenings, guests gather to cook dinner, trade stories and plan for upcoming travels.

Nikita Bencharov’s Usadba (Estate) welcomes visitors with wooden cottages, patchwork quilts in the rooms and interiors decorated with ancient knick knacks. Guests can watch films about Lake Baikal in its small library, play volleyball or relax on the terrace.

The host, Nikita Bencharov, is an anti-pollution activist who clears up unauthorized landfills in Khuzhir with his supporters, collecting plastic items and sending them to Irkutsk for recycling.

There is no official camp site on the island - you can actually pitch your tent wherever you want. One of the best places is a large clearing in front of a church: it has an excellent view of the church and the Baikal waters. But be wary of the tolling of bells in the morning.

Tatiana, who speaks fluent English, runs a small shop on Pushkin Street in Khuzhir. She and her husband rent out bikes, inflatable boats and wetsuits to keep tourists from getting cold in the freezing waters of Baikal. They can even help map out a route of the desired level of difficulty.

Four kilometers from Khuzhir, you can visit the open-air museum in Maly Khuzhir, a village of indigenous Buryats. Here, in one of the traditional Buryat tents, a yurt, they will treat you to some ethnic food, songs and even tarasun, a milk brandy.

Another popular route from Khuzhir goes almost all the way across the steppe to the Kurykan Wall. Olkhon has over a hundred archaeological monuments: burial grounds, sites of ancient towns and ruins of ancient walls, including the Kurykan Wall on the Khorgoi Cape in the south of the island.

Scientists are still undecided whether its purpose was to protect the locals from nomadic tribes or for offerings and sacrifices.

The Shara-Nur mountain lake is yet another destination for a bike ride. The mineral-rich waters of the lake are good for one's health.

Tourism aside, fishing constitutes the main business for Olkhon residents. Under the cliffs of Olkhon’s eastern shore, grayling, Arctic cisco, pike and perch await. The locals bait them with grasshoppers.

Local custom also prescribes scattering breadcrumbs and little candy once in a while. It's a simple rite intended to please the ghosts of the lake so they do not hurt the fishermen.

Olkhon, as well as the Baikal area in general, is rich in what may seem to an outsider to be curious traditions and rites.

In late July, the island becomes home to an annual gathering of shamans.

They arrive from Ulan-Ude, all over the Altai Region and Mongolia to perform their rites, which involve long drumming sessions to put them in a trance, sprinkling stones with the milk brandy and putting colored ribbons on trees.

This is worth seeing at least once.

Olkhon is widely believed to be endowed with magic powers to draw tourists back. No one knows the secret but dozens of tourists come to the island for a second – or even a third – time.

Parish of the Icon of Our Lady Derzhavnaya