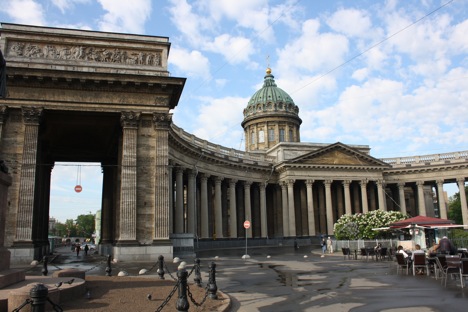 Cathedral of Our Lady of Kazan in St Petersburg. Source: Ajay Kamalakaran

Take advantage of the spectacular occasion called the ‘White Nights’ and make the most out of a 24-hour day in Russia’s opulent northern capital.

7:00 AM: Photograph the city’s great architecture

Those celebrating the White Nights have already gone home, while office-goers in the city are still trying to sleep despite it being bright outside. This is the perfect time to get out on the streets of the city centre and take photos of the city’s great buildings. Start off with the Our Lady of Kazan Cathedral and move on to the iconic St Isaac’s before walking over to the Church of the Blood of the Saviour and finally to the Hermitage and the city’s main square and the Neva embankment.  The light is absolutely perfect and the tourist hordes have yet to descend on the city centre.

Enjoy a coffee along with a fresh croissant or a bijou pastry at Du Nord 1834, a French café at the Oktyabarskaya Hotel. The café was named after one of the city’s first French confectionaries, which was housed in the same building in the 19th century and was popular with the city’s aristocracy, for whom fluency in French was essential.

This magnificent and tastefully restored series of palaces and gardens is on the southern shore of the Gulf of Finland and is away from the city centre, but the trip is certainly worth the effort. The area is unfairly called as the Russian answer to Versailles, although Peter the Great did get the inspiration to construct the estate from the French palace.

The main attractions at Petrhof are the Grand Palace and the Cascade fountain, but there is much more to see in this estate with its expansive gardens and paths that lead to the sea. The estate is a manifestation of Peter the Great’s dream to build a European cultural masterpiece. Petrhof is large enough to swallow the crowds that visit and still leave the visitor feeling like he or she has more than enough space and breathing room.

There are several smaller Russian cafes near the Church of the Blood of the Saviour. Since it’s summer, many of them serve cold borsch or okroshka, a refreshing and cold soup that is a mix of mostly raw vegetables, boiled potatoes, eggs, and sliced cooked meat.

If you’re looking for a traditional Russian meat and potato combination, then wash it down with kvass, a fermented beverage made from rye bread.

Winter, not summer, is the best time to visit museums, but a trip to St Petersburg just cannot be complete for a Dostoyevsky fan without visiting the house where he wrote the masterpiece Karamazov Brothers.

The apartment has been restored to look exactly the way it did when the great writer died there. There are many conspiracy theories as to how he died. Some have even suggested that he was killed by the police who found out about his alleged involvement in the murder of Czar Alexander II.

The house is a bit off the beaten track but a must-see for those who appreciate Russian literature. Make sure you take an audio guided tour.

5:30 PM: Make a Wish at the Chizik Pizik statue

Like the Trevi Fountain in Rome, St Petersburg has a spot where a wish may be granted if you drop a coin at a particular spot.  The city’s smallest sculpture is a monument to the Chizik Pizik, a tiny bronze bird is referred to in a popular folk song. If you drop a coin on the statue, which is below a bridge on the Fontanka, and it lands on the small ledge, your wish will come true.

The riverside lawn by the oldest citadel in St Petersburg is a great place to catch some early evening sun and do some serious people-watching in the city. The area is popular with sun-bathers, families, couples and groups of young people.

There are also great views of the Hermitage and the St Issac’s Cathedral, which are on the other side of the Neva. The adventurous can head down to the beach by the river and take a cold dip in the river. There are signs saying that swimming is forbidden but then this is not something one can get arrested for.

This 220-year old restaurant is a St Petersburg institution and the great service and food is worth the splurge. Enjoy dinner like the Russian elite of the 19th century. Get escorted through the halls and staircases before sitting at on old-styled large table.

This is a restaurant that takes its old school values very seriously so it is essential to dress for the occasion.

Also make sure you get a glimpse of the bathrooms, even if nature doesn’t call.

There is a great concert scene in the city during the White Nights as residents look to make the most out of every night in the short period. Many of these concerts are held in the courtyards of buildings. There is a wide variety of music on offer. Check with the friendly young people as to where they are headed.

Many of these concerts go on late into the night.

Cap off the long day with a trip to the riverside to watch the city’s numerous drawbridges open out to allow navigation on the Neva. There are very few sights as beautiful as the opening of these bridges on a White Night.

It may take a tremendous amount of stamina to make the most out a 24-hour day in Russia’s northern capital, but the aura and mystique of the much-written about White Nights makes it worth the effort.