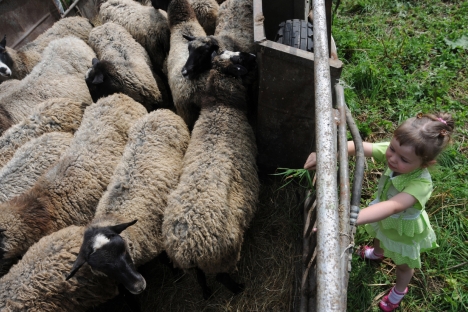 The town of Tutaev is seen as an idyllic place where sheep are roaming . Source: PhotoXPress

Most Russians have not heard of Tutaev, but the beautiful town in the Yaroslavl Region somehow found its way into the first part of Haruki Murakami’s celebrated trilogy.

We start our journey to Tutayev in the region’s capital – the ancient Russian city of Yarolslavl. This was also the capital of the influential medieval principality of the same name that was founded 1,000 years ago in a picturesque location at the confluence of the Kotorosl and Volga rivers.

Yaroslavl is one of the main stops on the Golden Ring tourist route, which includes a number of ancient Russian towns and cities.

Each stop on the Golden Ring route is interesting in its own way, although some places are more appealing than others: Five minutes admiring the scenery of overly touristy towns like Myshkin are often enough, for example, while places like Veliky Novgorod and the surrounding area might warrant a full two or three days. Yarolslavl certainly belongs to the latter category.

If you are traveling to Yarolslavl by car (186 miles or 5-7 hours along the M8, depending on the traffic), you will be greeted by a view so breathtaking that even the most hateful cyberpunk would be moved.

The view of Tutaev on the Volga river. Source: Lori / Legion Media

The futuristic-looking Novo-Yaroslavsky complex is one of the biggest oil refineries in Russia. Fortunately, it has recently been modernized and is located far enough from the historic city center so as not to be a hindrance to – or, indeed, pollute the air for – sightseers and locals alike.

In addition to the cool snapshots you can take against the background of the mysterious silver shapes, the factory gives Yarolslavl a huge advantage in terms of tourism.

Yarolslavl is not short of a buck or two, nor is it lacking fine restaurants and cafés. Here you can find everything, from cheap diners serving Russian pies and borsch, to exclusive, Moscow-style establishments with Moscow prices.

People do not come to Yarolslavl for the views of its chemical producing factory, though. You can spend hours wandering the rather compact city center.

The city is the birthplace of the Yarolslavl – or Upper Volga – school of architecture, whose influence can be seen on one of Russia’s most recognized symbols, St. Basil’s Cathedral.

The best examples of this school of architecture are the 17th-century St. John the Baptist Church (69 Zakotoroslskaya Embankment, open 10 a.m.–5 p.m., Wednesday–Sunday), which has been named a UNESCO World Heritage Site, and the St. Nicholas the Wonderworker Church, which was built around the same time (1 Tchaikovsky Street, visit for the times of services).

You should also check out the Holy Transfiguration Monastery in the city center (25 Bogoyavlenskaya Square). The monastery, which was built in the 13th century and houses a number of museums, is open 8 a.m.–8 p.m. during the summer and 10 a.m.–5.30 p.m. in the winter (closed Mondays).

There is also the Peter and Paul Cathedral, which was built more recently. And also...

There are, in fact, so may wonderful churches in Yaroslavl that some visitors begin to find it a little annoying – there is just no way of seeing them all. All we can say is that there is plenty in the way of architecture to keep visitors occupied as well.

The original, private development that took place here during the 18th –20th centuries, with its wood and stone work, has been largely preserved.

There are also some original examples of modern architecture (the fire department and its watch tower on the city’s very own Red Square) and Stalinist architecture (the “House with the Arch” on Soviet Street by renowned architect Mikhail Parusnikov).

Maps and travel guides are available in English, and you should have no problem picking up a souvenir or two.

In terms of places to stay, there is something in Yarolslavl to satisfy the most diverse tastes and budgets – from the riotous and expensive Ioann Vasilyevich Hotel (34 Revolution Street) to the ultra-quiet Academy of Management Guest House (42 Respublikanskaya Street).

But let’s get back to those sheep. If you head 18 miles down Tutayevskoye Highway, you will find yourself in a small town named after the nondescript Red Army soldier Tutayev – the hero of our tale.

First, a few words need to be said about the history of this underrated spot. Tutayev is essentially two towns separated by the Volga River, and, until 1918, it was called Romanovo-Borisoglebsk.

The city formerly known as Borisoglebsk is most famous for its 17th-century Church of the Resurrection – an unqualified masterpiece of Upper Volga architecture – and the miraculous icon of the Merciful Savior that is kept here.

According to legend, this massive icon was crafted by St. Dionysius Glushitsky at the turn of the 15th century. People come from all over Russia to bow before the image of the Merciful Savior.

The view from the church of the opposite bank is Romanovo – the older and once more affluent part of the city. This is one of the most stunning views you will find in all of Russia.

Seven churches of varying ages, colors and styles, scattered between idyllic country houses on a wide slope, merge together into one harmonious ensemble.

The17th-century Holy Cross Cathedral, with its unique frescoes (another pearl of the Upper Volga style), and the baroque Church of the Kazan Icon of the Mother of God (built in the 18th century) are particularly deserving of your attention.

The view is even more special during the Ninth Sunday after Trinity procession, when the icon, accompanied by a crowd of believers, is transported to the Romanovo side of the river, passing through all the churches on its way.

Romanovo is more recognizable to people for its sheep than for its beauty – a fact that was immortalized in Murakami’s thriller. According to the author, Romanovo sheep were brought to Japan along with other elite breeds.

The evil sheep heroine of the sensational book becomes lost in the herd, with its incredibly warm fur that is considered the best in the world.

There is not much in the way of restaurants or hotels in this wondrous place, but Yaroslavl is only 18 miles down the road. Trains to Yaroslavl from Moscow leave from Yaroslavsky Station; there are a few dozen each day.

Once you arrive, you can get to Tutayev by bus (a number of buses run from 6:30 a.m. to 8 p.m.). The bus station is located next to Yaroslavl Main Railway Terminal (1 Privokzalnaya Square).