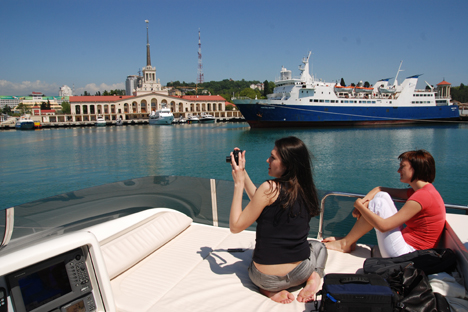 The unique combination of the subtropical climate and the mountains of the North Caucasus makes Sochi one of Russia’s most attractive tourist destinations. Source: ITAR-TASS

The host of the next Winter Olympics is a fun place in the summer and offers an eccentric mix of Soviet lifestyle and trendy dining and nightlife.

Sochi, once a major sea resort for millions of people back in Soviet times, is now busy preparing for the upcoming Winter Olympics. Those wishing to visit the future sports hotspot before the Games can discover the city’s eccentric mix of Soviet lifestyle, trendy restaurants, Russian chanson music, traditional Caucasian food and interesting locals.

One of the most stretched-out cities in the world, Sochi is a narrow strip of land sprawling 90 miles across the Black Sea coastline. The unique combination of the subtropical climate in the coastal area and the mountains of the North Caucasus over the seaside makes this place one of Russia’s most attractive tourist destinations.

“Summer in Sochi starts when the whole city is filled with its trademark smell of blooming magnolias and shashlyk [a kind of kebab],” says a tour guide in the arboretum, which serves as the city’s main landmark.

Founded in 1892 by St. Petersburg publisher Sergei Khudekov, the 123-acre arboretum now boasts a unique collection of 2,000 species of exotic trees and flowers that were imported to Sochi from all parts of the world. It is divided into two areas – the upper park and the lower one.

The former is the main part of the collection of trees and flowers, and it resembles an endless rainforest. Entering this part of the park, visitors can easily get lost among numerous palm trees, cypresses, magnolias, cedars and pines.

It is not only nature’s resemblance to Eden that is astonishing here, but also the scent – an exotic mixture of herbs and flowers.

The Arboretum in Sochi boasts a unique collection of exotic trees and flowers. Source: RIA Novosti

The lower part of the arboretum is a place to relax in the ivy alley, watch a couple of black and white swans gliding on the water and feed several brazen nutrias.

The arboretum is located on 74 Kurortny Avenue. In the summer, the park is open every day from 8 a.m. until 9 p.m. The entry ticket costs about $8; if you want to have a guided tour that is more informative and entertaining, just add $1.7.

Sochi has always been a favorite recreational place for many Soviet and Russian political leaders, and now this fact is widely endorsed by the local tourism industry.

You will hardly be welcome at the Bocharov Ruchei (Putin’s summer residence), but you can easily pop in to Stalin’s villa and shake the host’s hand – that is, his wax figure’s hand.

The villa includes Stalin’s house that has been turned into a museum, as well as a residential area with 12 apartment suites available for renting.

The keeper of the place, a lady with an iron voice and a former KGB employee, meets you at the entrance and gives you the story of the villa. She tells that the mansion was built in 1937 (she does not mention that it was the peak of the Stalinist purges), and, since that time, it has not been renovated – all the furniture and décor are authentic.

Then she leads you to the Chimney Hall, where Stalin hosted receptions but “never drank with the guests.” She also shows you his office, with the dictator’s wax figure sitting at the table.

There you can see a hefty leather coach where he watched movies alone, as “he was very reserved person and did not want anyone to see his emotions.” Remember not to pat the host or touch his smoking pipe: You will be blamed for misbehaviour in the presence of “the Great Leader.”

If you are not afraid of possible ghosts and do not mind spending $450 for a night in Stalin’s suite, then this experience could become one of the main topics of discussion with your friends for a long time.

Nothing would make a tourist more satisfied than local delicacies at a reasonable price. Luckily, in Sochi, everyone will find restaurants that fit their budget.

The city’s close proximity to the Caucasus republics, as well as to Abkhazia and Georgia, define the abundance of ethnic restaurants: There are the trademark shashlyks, khinkali, khachapuri, matsoni, satsivi and other dishes that require polyglot skills to pronounce their names correctly.

Belyie Nochi (“White Nights”) is the number one restaurant in which to try Georgian khinkali – a kind of dumpling usually filled with beef and pork. They have them fried and boiled in Belyie Nochi, with a wide range of sauces.

The city of Sochi, where the summer comes across the winter (gallery)

A portion of five khinkalis goes for $6, which is unbelievably cheap even for Sochi standards. If you want more, there is sturgeon soup, or “ukha,” which has traditionally been considered a czar’s meal. It is definitely worth the title.

If you are going to spend a good while at the restaurant, book a table on the terrace well in advance, as it is usually overcrowded. Belyie Nochi is located on 9 Ordzhonikidze Street.

Just a couple of minutes from Sochi’s central seaport, there is the Stariy Bazar (“Old Bazar”) restaurant, which attracts both tourists and locals with its democratic prices and to-die-for, tasty food. If you are here, try khachapuri – a Georgian bread pie of circular shape filled with cheese.

It is hard to choose between Imeretian khachapuri (the most common type) and Adjarian khachapuri (in which the dough is made into the shape of an open boat and the hot pie is topped with a soft-boiled egg and butter). Each one is huge and can easily serve as a full-fledged dinner. As for Russian ukha, they make it with trout and fennel.

The average check for a three-course meal here is about $30.

Unlike the majority of Sochi restaurants and their traditional food and Caucasus-inspired interior, Chaika (“Seagull”) serves mainly European cuisine and looks very Mediterranean. It is worth visiting, since the place is located in the unique building of Stalin's imperial style with a magnificent sea view from the terrace.

The restaurant is owned by a Moscow-based luxury company, which explains the whole atmosphere of a laidback, trendy place with rather expensive food. But only here can you try ideal creamy mushroom soup. The average bill is about $70.

Chaika is located on 1 Voykovaya Street.

Sochi as it is

There are more stereotypes about Sochi than about any other Russian city. It is widely known as the place where you still can find that peculiar culture of Russia’s 1990s, with brutal, mafia-looking guys, and singers in restaurants performing songs about the difficult fate of mobsters, the harsh life in prison and the attempts for freedom.

On the one hand, the city is trying to catch up to Moscow by opening trendy restaurants and night clubs with fashionable names like London or Malibu, and putting bouncers there who look so dramatically tough that it makes you laugh. On the other hand, Sochi is still so deeply in the past.

Take the local girls, for example. Unlike their European peers, beauties in Sochi are anxious to attract attention. Skinny jeans, miniskirts, high heels on any occasion – an average girl from Sochi has Kim Kardashian-like style and, usually, a tough guy next to her driving something ranging from a pimped-out Lada to Porsche – but always with tinted windows.

All of this is a part of Sochi’s unique image, so different from traditional Western lifestyle, where everybody is concerned about yoga, organic food and manners. Like Russia itself, Sochi has contradictory traits of character: You may like it or hate it, but it will not leave you indifferent.