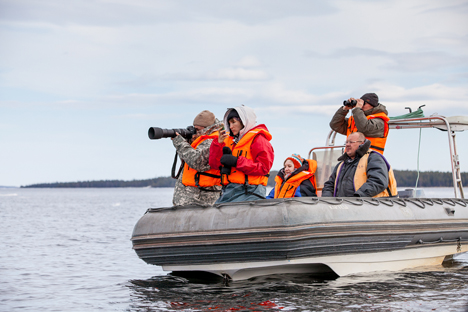 The White Sea in northern Russia is home to 4 different species of seals and many tourists are taking a week-long photo safari to see the mammals in their natural habitat.

Nilmoguba Village sits at the mouth of River Nilmo on the White Sea. The nearest rail station is actually named “Arctic Circle.” In the winter, the snow drifts reach your waist here, and you can see the Northern Lights; during summer there is “the midnight sun,” and the snow only finally melts in May.

However, in recent years, this area has seen more and more ecotourism visitors. In fact, it is only here that you can take a week-long photo-safari to see seals in their own native surroundings.

“We've got four species of seal here in the White Sea,” says instructor Mikhail during an introductory briefing. “The first one is the bearded seal, or sea hare. His whiskers stick out, making him easy to recognize. Next there's the ringed seal: It has grey or brown spots on its skin, in the shape of rings. The harp seal is a very rare visitor, who only visits this area during the whelping – that is, the breeding season. Finally, there's the grey seal, but it's found only around the Kola Peninsula, and it doesn't swim up as far as Velikaya Salma here.”

You can rent diving gear at Nilmoguba year-round and take a dive below the surface of the White Sea. There is also an open-air dolphinarium where they train large white whales, for which the White Sea is a natural habitat.

“Will we be able to touch them?” asks a middle-aged mother who can contain herself no longer, having brought her 12-year-old son to see the seals. The other group members indulge in a furtive chuckle.

The idea of showing tourists animals in their native habitats is not new, but Russia seems a somewhat unlikely country to set about doing it. Even in wildlife reserves in Russia, it is hard to guarantee that you will see the animals, while bears or elk can turn up just at the moment you were not expecting them.

Photo of the day: A Baltic grey seal cub

The Russian North can actually be a more promising location for the interaction of man and nature. The huge icy wastes are a plus: Seeing an animal on the ice is much easier than trying to find them in some forest undergrowth; with knowledge of the location and migration patterns, it becomes possible to guarantee a sighting of the animals in question with almost 100 percent accuracy.

This insight is the basis of the work of almost all guides working here in the Arctic Circle, at the boundaries of Karelia and Murmansk Region.

In spring, the mustachioed charmers usually gather where the smaller bays still remain icebound. Spring ice is weaker, with a melting look that seems more fragile – but it can easily support the weight of heavy seals.

Seals are skilled ice-shufflers, and they can get around almost anywhere on the great ice-sheet for strategic safety: Humans cannot move silently, and the bears cannot move in from the shore.

While waiting, fingers resting idly on the camera shutter-buttons are almost frozen, and eyes are watering from the wind – but none of it seems to matter for the tourists. This was exactly what wildlife activists were hoping for – to replace hundreds of years of seal-hunting with ecotourism instead.

Seals are skilled ice-shufflers, and they can get around almost anywhere on the great ice-sheet for strategic safety. Source: Yevgeny Ptushka / strana.ru

A few years ago, a wave of protests erupted around the world about the culling of harp seal pups – tiny defenseless baby seals and molting youngsters. This kind of trade has flourished in Russia and among the world's northern countries – Norway, Denmark, Canada...

The toll of just one season's massacre, which goes on for 10 days, runs up to tens of thousands of dead baby seals. In just a single year, the activists won an important victory – a complete ban on hunting baby seals in Russia. The ban went into force in March 2009.

Seal meat saved the lives of residents of Arkhangelsk and Leningrad during the hungry years of war. Arkhangelsk even erected a thanksgiving monument to the seals. Seal oil was once used for heating fuel and is even used in some folk cures.

“Seal trips have a very limited season,” the guide says. “The pups are born in early March, and [they] only keep their white fur for two weeks while they're being nourished with mother's milk. During that time, we organize flights to the ice-flows by helicopter from Arkhangelsk.  Tourists can spend the whole day at this seal nursery.”

The tiny seal cubs are trusting and do not know what fear is. You can come up close to them, take photographs next to them and even stroke them – best to use gloves, though. The scent of humans does not affect the way the mothers treat their young. Still, it is considerably harder to catch sight of younger and grown-up seals.

“That's why we collect together one group each year, in early May,” says Mikhail.

“It's the time when the ice begins melting and the White Sea herring come in close to the shore.  The seals gather together in a pack and gorge themselves on the herring. The ice in the sea disappears pretty quickly –maybe just a week – and you wouldn't recognize these waters. After that, they split up and live separately, and are much harder to find.”

Seeing an animal on the ice is easy; with knowledge of the location and migration patterns, it becomes possible to guarantee a sighting of the animals. Source: Yevgeny Ptushka / strana.ru

The maneuvers of one of the ecotourism boats are finally crowned with success: They have almost come close to the unwary seals. The ice-flow beneath is not as strong as it looked, and it breaks under the weight of the sea hares. The flows roll over and then sinks into the depths on their sides – leaving a very perturbed seal face behind them. The boat breaks out into laughter and everyone takes photographs.

Back at the tourist camp, the exultant spotters are eagerly discussing how they want to visit the seals again.

“How about if we used herring as bait?” one enthusiast asks by way of suggestion.

“It's not very likely – we've tried everything, but they're too wary,” says Sasha. In a serious voice Sasha adds: “Don't forget that, if we make them tame, it's dangerous for the seals.”

“The seals – especially the youngest ones – don't yet have any idea what to expect from this world,” says Mikhail. “They have no sense of fear at all – and no fear of man either. If we show them now that we're not dangerous – but the next time they meet humans, it's their enemies – they will have no sense of the danger.”