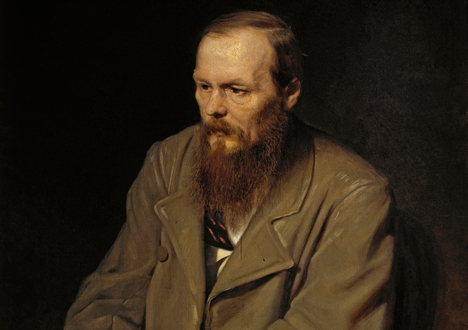 Walking in the footsteps of the characters from famous novel Crime and Punishment is a perfect way to explore the underbelly of St. Petersburg, as Dostoevsky described it.

“In the beginning of July, when it was extremely hot, near evening, a young man left his small room ( ... ) on S-y alley, went down the street and slowly, as if undecided, headed for K- Bridge ... .”

It would be difficult to walk in the footsteps of Raskolnikov, the main character of the novel, if Dostoyevsky's wife Anna Grigorievna hadn't filled in the missing letters of the street names after her husband's death. So, the “S-y” Alley became Stolyarny, “K-n” Bridge, Kokushkin, and Dostoyevsky fans received a starting point for their walks. What's more, the writer himself lived at the corner of Stolyarny Alley and Kaznacheisky Street when he wrote the novel.

Today a memorial plaque hangs on house No. 7 on Kaznacheisky. Dostoevsky's characters lived not far from him – however, he didn't specify exact addresses. Researchers believe that it was not a coincidence: “He masks them very transparently. In so doing, we should understand that we are reading literature. The real Petersburg with fictional events – everything is connected, is transformed and a great novel is the result,” explains Marina Uvarova, researcher at the Dostoevsky Literary and Memorial Museum.

The author settled Raskolnikov at the corner of Stolyarny and Grazhdansky streets, which in the 19th century was called Srednaya Meshchanskaya. The words “Home of Raskolnikov” were carved in high relief on house No. 19 on Grazhdansky street in 1999. Also found there are a sculpture of the writer and steps that remind us that the small room of Rodion Romanovich was located right under the roof, and was reached by 13 steps. The arch that leads to the courtyard, unfortunately, is closed with a gate that has a house call system, because tenants were constantly pestered by tourists and the curious.

In Dostoyevsky's time there were as many as 22 drinking establishments on Stolyarny. It is not surprising that Raskolnikov constantly heard drunken cries from the street. Taverns in general have an important role to play in Dostoyevsky's St. Petersburg. It is in a tavern that Raskolnikov meets Marmeladov and overhears students saying that the life of the old woman is worthless.

Stolyarny Alley continues on to Kokushkin Bridge, which is a stone's throw from the key locations in the novel – the home of the old pawnbroker that Raskolnikov kills (Griboedov Canal 104), the police office (Griboedov Canal 67), Voznesensky Bridge, where drunk bureaucrat Marmeladov dies under carriage wheels, and the home of his daughter Sonya, the poor girl forced into prostitution (Griboedov Canal Shore 73).

If in Dostoyevsky's time Sonya's house was “three story, old and green,” now it looks different – it was built higher and painted yellow. Dostoevsky gives a detailed description of Sonya's room: “The wall with three windows facing the canal cut across the room sideways somehow, making one corner terribly acute, it ran in somewhere deeply so that in dim lighting it couldn't be seen very well, the other corner was too dreadfully blunt.” It is the blunt corner of the house that is visible from Kokushkin Bridge.

From Raskolnikov's home to the old woman's place is exactly 730 steps, according to the novel. A person can measure the route himself, which goes from the Rodion home, across Voznesensky Bridge, along Canal Griboedov and turns onto Srednaya Podyacheskaya Street. In fact, no one can make it in 730 steps, it always takes more. Some researchers attribute this to the fact that Raskolnikov was tall, and was walking when he was very distressed, others say that the writer multiplied the number of his own steps by two.

The Griboedov Canal itself, formerly known as Yekaterinsky, around which the events occur, was called Kanava (ditch) by locals. It didn't get this scornful name for nothing – waste was constantly dumped into it, producing an evil smell in the neighborhood. This is the St. Petersburg that Dostoyevsky presents us with – in contrast to the prim and proper city that Pushkin once described.

“Neva's majestic pulsation, The granite that her quaysides wear” – this is the grand side of the city that tourists usually are shown.

Every year Dostoyevsky Day is celebrated in St. Petersburg on the first Saturday in July. It is not held in conjunction with the birth of the great Russian writer. “Dostoyevsky was born in November, when it is cold. He died in January when again, it is cold. The beginning of July is when the most St. Petersburg of all his novels – Crime and Punishment – begins,” says the organiser of the festival, the assistant director of FMD Dostoevsky Theater Vera Biron. According to Biron, the best actors in Petersburg are involved in the theatrical performances held on Dostoyevsky Day. There are many activities held in conjunction with this festival: movie showings, lectures, master classes, seminars, exhibitions and thematic tours.